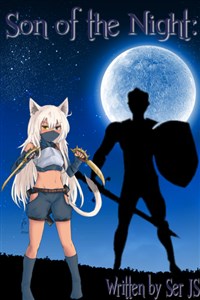 Son of the Night

“Are you sure that there will be a wave of enemies arriving in a week?” asked Frang.

Frang walked next to Akira along with the other two main wall commanders as they walked through Kodria's castle stone hallways heading to the main meeting room where the grand elders along with Advisor Samuel were waiting for them.

“Yes, I'll explain more when we get to the meeting room,” said Akira as he looked at the countdown for the branch 3 stage 4 quest. [7 days 12 hrs.]

Five heavily armored castle guards from the Madmane clan stood outside the door to the meeting room. Upon seeing Akira and the other wall commanders they saluted with great vigor.

One of the guards turned 90 degrees and pushed the door open allowing Akira and the others to keep walking without breaking a step.

“Akira! From what Klyn has been telling us you all had quite the adventure at the dwarven cities,” said Grand elder Seoc.

“If I was there I would have given them a wallop as well!” said Grand elder Àaron.

And so Akira spent the next ten minutes narrating what had happened to him after he dropped over the edge of the cliff.

“Fascinating, but I feel a bit helpless. It seems that you always get into situations that make it hard for your guards to protect you. You are the lord of Kodria. Put some more thought into your actions. If you keep doing stuff like this then what will we do if you are gravely wounded or killed?” asked Grand elder Seoc.

“It's fine, he may be young but he can handle himself. Plus, a few wounds from failures builds character!” said Grand elder Àaron pointing to the many scars on his body.

“We are all aware of his strength but it is never wrong to practice caution. My main worry right now is the new types of infected that you mentioned. The Bryer and that Chimera,” said Grand elder Hegir.

“I don't think there will be other chimeras like that one but it is still a good idea to make plans in case such a creature appears again. As for fighting the Bryers? We'll have to buff up the tower's defenses and rely more on the shaman to help defend the skys,” said Akira.

“Akira didn't you say you had important news to talk about other than those creatures?” asked Klyn.

Akira nodded his head. “In a week or so there will be an enemy attack on Kodria.”

“What?” “Who?” “What scoundrels dare?!” asked the other Grand elders, surprised and sitting up straight.

“All I know is that a large force is on its way. I don't know what type of army it is, all I know is that it probably has some connection to the Cult of science. I think it will be safe to say the attack will probably be similar to what the dwarven cities faced just on a larger scale,” said Akira.

“A week? That's far too little time to go over all that notes you all collected from the Dwarves. We still need to be careful with our experiments with the limited material we have,” said Grand elder Hegir.

“Don't worry grandfather, we sorted most of it already on the way back here,” said Klyn.

“Do you know where they will be coming from?” Asked Seoc.

“No, but I have a feeling it will be from the north,” said Akira.

“I will make sure to send out more of my clansmen and increase the scouting range of their patrols in the northern sector.”

“We have no time to be sitting around here! Klyn, let's go start working on the experiments!” said Grand elder Hegir as he grabbed Klyn and started dragging him out of the meeting room.

The two other Grand elders also stood up to leave the room.

As Àaron passed Akira, he patted him on the shoulder and said, “I admire your strength and courage. But if there ever comes a point when you put yourself and those along with you in mortal danger that is not courage but stupidity. Make sure you know when to fight and when to retreat.”

Akira was left with only the city wall captains and Nollan who had come to help represent the Yuki-onna kingdom along with rep Ieec.

“Nollan what will your people do? I won't be asking you to fight on the front line but can we expect help protecting both cities?”

“There should be no problem with that. Unfortunately with the event of the dwarfs getting attacked and now Kodria we can not send more forces north unless we wish to put our kingdom in jeopardy,” said Nollan.

“What do you want us to do?” Frang asked Akira.

“Let's go tour the walls of both the main city as well as the outer city to see what we need to work on to better survive this ordeal.”

Akira turned to Advisor Samuel and said, “Get into contact with the other allied demon races and inform them of what is happening. I know it is a lot to ask for some of them but If they can help then that would be much appreciated.”

Delgar stepped outside the sweltering room where the sounds of bellows and non-stop hammering rang out.

“What does he think we are? This workload is just getting worse every day...” muttered Delgar as he whipped the cooling sweat off his face.

He sat down on a crate of cheap iron ore and looked at the many detailed blueprints that had been given to him.

One was fairly simple, it was a new type of ballista head that was blunt. It was needed to fight against the more dangerous stone armor of the Molten Onyx infected.

Another was for a larger ballista that would shoot the new blunt heads farther and with a greater force. They had a sharp tip that allowed it to pierce into and then crumple into a blunt attack with the rest of its head.

And the last was a proto-type for metal blade claws.

All of this had been dropped on his lap only a half-hour ago when Akira passed by.

He and those under him still had many orders and daily tools and equipment that they had to create to keep Kodria and the outer city running.

Delgar looked up from the blueprints and saw two young Dwarves eating nearby.

“Hey, you two quick slacking! Get back in there! We have no time to play around!”

Everyone was actively doing something to prepare.

Varbu was running along the walls of the outer city leading the Orc and werewolf infantry in their daily exercises before the more intense training.

While they did that Prince Gobbers was focused on drilling the goblins in archery since the majority of them were unfit to fight on the front line against the Molten onyx infected.

Mileena, Azura, Maya, and Princess Gobalina were working on helping the inner and outer city run properly as the population of both continued to expand quickly. With the coming battle that would arrive at their doorsteps they now also had to prepare the supplies for the armies as well as food to keep the cities alive.

Akira stood on top of a newly built stone tower looking over the outer city. The four city wall guards stood next to him.

“The outer city walls have been completed and all of the civilians are now living inside. For now, we have enough space and housing for everyone. But I have a feeling with how fast the outer city has been growing it will be far too cramped inside here and we will have to expand,” said Leif, a werewolf city guard who had been promoted to the role of wall commander of the outer city.

“The walls may have been completed, but we are expecting a large army of enemies, some possibly in the sky. You need to start installing the new large ballista into the towers as soon as the Dwarves deliver them. Since we only have a week to get everything in place. Make sure that your men are well trained on the devices as soon as you get them. I believe they are going to be very important for the defenses of the outer city. You four must thoroughly keep all 700 city guards on a heavy training scheduled for the next week.”

“They are already practicing on the medium versions which will be replaced with the newer ones sent by the Dwarves. What do you want us to do with them once we remove them from the towers?”

Akira looked at the sky for a short moment as he thought about what to do with them.

“Send them to the navy. They can be installed on the ships to act as a mobile defense for either the inner or outer city,” said Akira as his attention turned to the lake where several ships were practicing maneuvers and mock battles.

The Navy had grown even larger since its last battle. They now had 6 large warships with long rams on the front of each ship. Each large ship had a minimum of 50 naval marines as a fighting force.

There were now 300 naval marines which was a far larger force than the 60 that they had started with at the beginning of the naval marine force.

Along with the 6 large ships were tens of medium and smaller ships under the navy many of them were used for troop transports, messengers, or escorts for the many merchant ships of Kodria.

They hadn't had many problems with pirates but it was only time before they ran into a problem on the rivers or at the sea.

He turned his attention to the forts at the river. They looked solid enough but he still wanted to further secure the walls, unfortunately, that had to wait until summer. So they would have to do with what they had.

At the south fort, the 500 strong Garg cavalry and 100 busters were conducting formation training in the snow. The 7000 strong Werewolf, 4000 Orc, and 4000 Goblin armies had joined them to get more hell training in.

It was breathtaking to see such a large force of combined demon race soldiers and cavalrymen marching in different formations.

A note from Ser JS

Thanks for reading Son of the night!
If you want to keep updated on when a new chapter is posted click here: Bookmark Son of the Night!

My current main story is Son of the Night.
My second story is Neo-Tokeyo 199x: M1 a cyberpunkish/sci-fi story
https://creativenovels.com/novel/neo-tokeyo-199x-m1/

I hope you enjoy reading while I get better and better at writing.