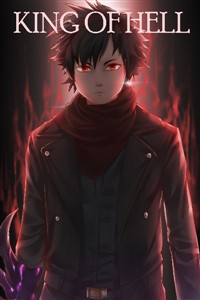 Hell, ruled by the Great Families of the Ars Goetia, with Satan as the head. Although merely a title for the True King, Satan is the one that stands at the height of these lands. For centuries, the Great Families have engaged in bloody wars and fierce political competition, by way of the King of Hell Summit. Our story follows Kuro and Seir, as they participate in this hellish event to exact revenge on the ruling Bael House, that has orchestrated a life wrought with tragedy for the both of them. Together, they will struggle against a world where the strong bully the weak and the concept of morality is an afterthought. In doing so, they will break the chains of rank, aristocracy and ascend to heights unknown…

This novel could've been so much more, it had potential but was unfortunately wasted. When I read the first chapter, I was excited. There is just something about religions and mythology that draws me in naturally. So I continue to read with high hope. Alas, the story was not what I imagined it to be. I came into novel, expecting an epic adventure. A story of how the MC rise to the top using wits and power, not a typical japanese harem story.

The first sign of this being your typical harem story is Seigr. Despite having power over the MC, he, for some reasons, ignored his responsibility as a Devil and helped him instead.

This could be forgiven of course, after all MC needed a teacher to help him grow, I have nothing against it. What I do have against is how you skipped 5 years of training without even mentioning how the MC was trained. Then there's the Yuki Onna who literally showed up out of nowhere with her typical yandere personality.

She just fell in love with him, like instantly. No need to go on dates or find out about each other whatsoever.

The MC, who was supposed to be a badass that escaped the Prison of Hell acting like a bashful teenager after seeing the Yuki Onna's real appearance is completely out of character. In other words, MC's personality is inconsistent.

The way you write the novel is extremely rushed, it's like you couldn't care less about details and just want to get things over with. Your writing style is... How do I put this delicately... Horrendous. There's no details, no description whatsoever. You just threw in a bunch of very confusing dialogues and some paragraph together.

I don't know about the later chapters, but in the first few, the world building was pretty much nonexistent. (This could've been easily solved if you hadn't skipped the 5 years of training).

Overall, this could at most be a light read for people not familiar with the genre at best. As for people who had read dozens, if not hundreds of similar stories like me, its below average. The writing style is not good, there are some novels that focus on details, there some that focus on emotion and the flow of the story, unfortunately this is none of the above. It's like a movie script.

The character personalities are japanese level of cringe and cliché. I honestly don't even know how a kid who literally escaped Hell could get embarrassed so easily. And as for the Yuki Onna, I thought she was supposed to be the Princess? How come she acts like a love-struck, highschool girl on drugs?

Truthfully, I was gonna give this 3 stars, but I lowered it to 2 due to the misleading description.

An exciting and funny read

I don't usually write reviews, but I felt like king of hell deserves praise and so I'd like to offer a couple thoughts and encouragement.

Firstly, the story captured me from the start. The premise is very interesting and separates itself from the type of novels often posted on this site. It is obvious how much thought and work the author has put into developing his world.

The cast of characters are very likeable - Seir and Alessia are just too damn cool. The characters really draw you into the story. The humour and references the author includes in the story complements the action moments very well.

The structure and writing style of the author makes the novel very digestible and easy to steam through the chapters.

One thing I would like to see is for the fights to last a bit longer. The reason is that the author writes them so well and they're all very intense and exciting. But it's so well done, I want to see more of it out of greed.

Anyway... Thanks for the novel. Keep up the good work. Miyabi worst girl.

Okay first things first, I like the idea. It is interesting and i imagine a good story could be built on that.

And author before you read this, know that i would like to read a well written story based on your ideas.

So why did I score the style and characters so low?

The simple answer: bad Japanese novels. Or to be clear you probably read to many bad Japanese novels, as this story has the same problem: flat stereotypical characters and horrendous dialogue. You likes dandere? No Problem, just flesh out the dandere character archetype and give it a history, motivations, world view and believable emotions and based on that believable actions.

You don’t know what is or isn’t believable? That doesn’t happen, just ask:“What would i do/feel?“. Then apapt this to how a character would feel based on its history, motivation, world view and emotional state.

Next the dialogue... honestly ,as i don’t write myself, i have no idea. I guess you could just use the same principles stated above. Think what would you say and than adapt that.

The last problem story structure. Unless it serves a purpose NEVER cut out opportunities to characters, it make them feel more human and enables the reader to emphasise. So what exactly do i mean by that? The Prison/Pit would have been a great opportunity to show his unwillingness to kill others, his willingness to kill others or  how his instincts take over and he just “watched” himself killing. For other traits of your mp the same applies greed, selfishness, honesty and abilities like telling whether somebody is lying or not based on body language and facial expressions.

Btw don’t forget his traits and abilities unless for something reasonable, like for a combat strategy or for general deception, use everthing.

Ps i only read the first two chapters so if you improved after that...sorry.