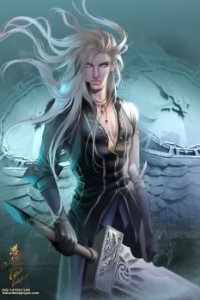 This story take place long long before the primordial and divine beast flourished and conquered most of the world, at this time the world was conquered by three different race the mad god race, the holy darkness race, and the berserk demon race.

The mad god race was known for it physical strength even among the god tribe and their innate ability to use world power as they like, the holy darkness race was the only race among the devil tribe that can use both yin and yang and even fuse it to make it become stronger and their innate ability also allow them to temper themself by absorbing yin and yang energy directly from the world without any side effect toward them, lastly the berserk demon just like their name their innate ability was to become berserk but without any side effect and the increase was not only a meager few fold but it can reach a few hundred or even thousand more time and only using this innate ability they can stand toe to toe with the other two race.

In this turbulence time the other race was either they was enslaved or in hidding afraid of being made into cannon fodder when the war break out.

Human race, this story started in this little race that was almost went extinct, human was the only race that have their innate ability destroyed by the three race because of a legend that stated that one day one child will be born from human and make innate ability almost become useless, because of this legend the three race fro the first time make peace and cooperate with each other to hunt and destroy the entire human race but was stopped and almost get annihilated by one male human, because their plan failed they prepared a massive curse by sacrificing many race even those of the same tribe as them just to destroy human race innate ability and shortening their lifespan.

When the human race saw that there was a man from their race have such power and yet didn't use it to help them or annihilate the three race for the first time they feel something other than fear and that was the feeling of being weak and wanted to be strong, one child asked the man " mi.. mis... mister, how can l become strong as you!!!?"

The man felt amused by the kid question answered "kid it wasn't my destiny to teach you how to become stronger or to make our race become the peak of all race, l'm merely guarding human race until that legend happen, so l'm sorry kid, take this as a toke of my apology" the man extending his finger and a white light flew toward the kid temple then the man vanished.

Later on the kid will become the progenitor of the cultivation thank to gift given by the mysterious man and using this cultivation he make the human race reached it peak but the curse left by the three race can't be erased but can be negated or erased if they reach certain realm in their cultivation.

Human race only at the peak for a period of a few thousand years before crumbled apart and replaced by the beast tribe because the cultivation progenitor left in search for the mysterious man and how human race become more arrogant making it the public enemy of all tribe.

Bio: I'M THE PRIME THE ONE AND ONLY, GOD IS MY FOOD, HEAVEN WAS MY PLAYGROUND, HELL WAS MY BATH, SUCH IS MY FATE AS THE STRONGEST