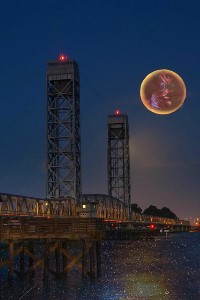 “Class dismissed!” - the words Dares had been waiting for. He shoved his books haphazardly into his backpack and hung back, waiting for the rush of escaping kids to taper off to a thin trickle before trying to squeeze through as well. He sensed something at his back, and turned to see, for a brief moment, one of those jet-black imps staring in at him through the window he sat by - just watching and waiting. He didn’t feel like giving it any attention, so he pretended it didn’t exist. And, soon enough, it was gone like a brief figment of his imagination.

Dares shrugged and let himself out into the hall. He was halfway through the locker corridor, wondering what sign he was supposed to see at the field, when someone blindsided him. He was pinned against the metal door by slender, but surprisingly powerful arms on either side of him, cutting off any escape.

“And where exactly do you think you’re going?” a girl’s voice asked him.

“Hi, Claire.” said Dares, his nose tickled by a few silver strands of her hair that had brushed his face.

“You’ve got some nerve trying to give me the slip. It's not nice to keep a girl waiting.” she smirked. She looked at him in a similar fashion to a lioness staring down an antelope.

“Uh, today's not a good day.” Dares answered feebly. He wasn’t sure how to extricate himself. If he just tried to brush past her, he’d surely absorb her sensations again. What was more, he didn’t want to see whatever had left that permanent cynical air about her spirit. His own dissatisfaction was enough.

Claire looked like she had just been slapped. “You can’t be serious. An older girl’s willing to take you out and suddenly you’re busy? This was your idea in the first place, kid. Or maybe-”

Dares released his breath as Claire stepped back and placed her hands on her hips. She looked him up and down suspiciously. “Maybe someone put you up to this?”

“No, it's not like that.” Dares tried to reassure her, wishing he had never opened his fat mouth and put himself in this position in the first place.

“I was speaking from experience when I said rumors spread quickly. It’s not like I don't hear what people say about me. ‘The poor girl’. ‘Trailer-trash’. ‘The harlot’. It gets old quickly.” Claire lectured him. “I thought you might be able to relate to being an outsider. Was I wrong?”

You don’t know the half of it.

“Claire, I swear I’m not trying to trick you. It's just poor timing is all. I kind of promised I’d meet with someone today.”

“I can always tell when someone is lying, you know. You weren’t entirely honest with me then. I know you're hiding something, I just don’t know what.”

Should I tell her? But what if she's not the one I’m… supposed to be waiting for? That’s right. I don’t believe in fate anyway. Maybe I should tell her. I have to tell someone. Soon.

“I can’t give you the full story yet. I don’t really understand it myself. I'm sorry. But I'm not being put on by anyone. I’m doing this of my own free will.”

Claire locked eyes with him and held that scrutinizing gaze for an uncomfortable length of time. Finally, she seemed to be satisfied, and sighed. “Ok. I believe you, kid.” she said.

“You’d better. You’ve got till Saturday. I don’t forgive empty promises.” she warned, and cracked her knuckles for emphasis before raising her hands over her head and waltzing off.

Dares saw her walk right up to a very confused Ryder. The mammoth boy looked back and forth from his cousin and Dares in disbelief. Dares heard them banter as they exited the halls.

“You got a thing for little boys now?”

The voices gradually faded, and a new one piped up. “What was that?” Jun stood there, blushing furiously.

“Go out with her and have Ryder kick my ass, or blow her off and have her kick my ass.” said Dares, resigned to a beating from someone. “Accident or not, I did kind of promise. Speaking of which,” Dares gazed at the clock. “We’d better sprint.”

And so they did. However, Dares briefly lost sight of Jun when something caught his attention out of the corner of his eye. He stopped and turned to a telephone pole where something was taped to the metal. Entranced, Dares moved toward it despite himself. It was a missing poster. Dares had noticed it because the picture was that of the dog from his dream. He recognized it clearly. The dog was missing. A cash reward for its return, and a contact number were listed below. Dares called the number, forgetting his rush to the stadium.

“Hi. I might have seen your dog in an alleyway, east side. When was the last time you saw him?”

There was silence on the line initially. And then -

“Very funny. I don’t know how you got this number, but piss off.” - Click.

Dares recoiled from his cell phone, stung by the bitter emotion. Was he on the receiving end of some kind of prank? No, that didn’t make any sense. In any case, when Dares looked again to the pole, the poster was still there. The picture of the dog and the contact information, however, had begun to fade away.

They made it to the field with a minute to spare. Shunpei turned his head to them in the crowd and smirked. They took their places on the bleachers and waited, tucked away in a sparsely populated corner where Dares wasn’t entirely overwhelmed by the tsunami of excitement and tension the collective crowd created with their cheers. The smell of grass and sweat was overpowering.

Shunpei stood at the front of his team, staring down the opposing team as if he was on the hunt, sizing up his prey. All was still as the murmurings from the crowd died down to a hush. A sudden breeze fluttered through the field, and then the whistle sounded.

Shunpei phased forward silently and exerted his dominance over the ball. His teammates followed his lead, weaving in and out of their opponents’ reach, cutting deep into enemy lines. Shunpei ricocheted the ball between them as if second nature. He didn’t seem just to be acting on instinct. Rather, he projected total control, as if he had eyes on every player at once, like pieces on a game board of his own design. No, like -

“- a general leading an army,” said Dares. “He doesn't look like he's just playing a game. I can’t completely describe it. He's seeing things differently from the rest, somehow.”

“You got that impression too, huh?” Jun responded. “But did you see anything strange?” she asked him.

As a matter of fact, he had. During the last four minutes when both teams were tied for points, Shunpei raced forward to make the tie-breaking score and found himself blocked by the bitterly determined goalie, acting on a final charge of power leased from his adrenaline. Shunpei lined up his shot and kicked forward what was certainly a misfire, barreling into the keeper's waiting arms. And at that moment, the overcast clouds decided to part, and a column of sun blinded the goalie. The goalie missed.

He walked into the locker room to admit his loss with dignity. Shunpei was still in his team-wear, wiping his face with a wet cloth and stretching with a yawn.

“How did you know?” Dares announced his presence. No need to beat around the bush.

Shunpei’s face lit up when he saw him. “Beats me.” he shrugged. “Call it a hunch, or intuition, or whatever. To be honest, I wasn't sure exactly what was going to happen. It's just… I don’t know, have you ever felt like you just knew everything was going to work out?”

No. Dares could safely say he had never felt anything was going to work out, ever.

“Now that's a gloomy face. Cheer up!” Shunpei laughed. He swiped a nozzle off its hook.

“Wait, don’t you dare-” - Dares caught a face full of icy shower water that pelted him like liquid rocks.

“Need to work on your reflexes.”

“You-” Dares growled, half-choked by his own soaking hair. He saw another blast coming his way, and narrowly ducked under it.

“Asshole!” Dares barked back, and snatched up a nozzle of his own. Shunpei ran circles around him until Dares had choked himself out, tangled up in the cord like a dog at the end of its leash.

“What a funny face!” Shunpei cracked up at Dares’ comically furious expression. Dares silently grabbed an abandoned bucket full of mop water while Shunpei doubled over to catch his breath.

“You know,” said Shunpei, his eyes still closed. “When I'm out there on the field, it's a different state of consciousness.”

“Whatever’s going through my mind or whatever comes after; those things don't exist in the moment. Excitement, anxiety, frustration - everything just melts away, and I have clarity. When you're moving, nothing else is real. Feel your hair.”

Dares did, and felt the fresh water squelch between his fingers like swamp ooze. He could feel the cold, and taste iron as his lungs and heart labored to keep his body moving. His mind was in the present, processing these little sensations, far removed from his troubles.

“It’s cold, right? A shock to your system. Then autopilot takes over, and it all comes naturally. Those are the only times anything truly feels real. History, status, race, sex - none of it matters when push comes to shove. I can see everything clearly like it's all in slow motion.” said Shunpei.

“...I see… your friends certainly seem to move to your beat. You don’t look like you’re playing a game out there, more like it’s some kind of battle.” said Dares.

“Maybe it is. It's the only reason I bother staying in school. I’ve always thought that people have two sides. One-”

“One they present to blend in, and one they keep hidden.” said Dares.

“You only feel alive when you're in conflict.” said Dares.

“On point. A minor correction though. I don’t really consider any of my teammates friends. I don’t like people that blindly follow others, or put someone on a pedestal just because they can kick a ball around. They're more like pieces on a board to move around towards some end goal. But it gets boring. I want an equal, someone who can sit on the other side of that board with me, face to face.” said Shunpei, his eyes wandering to the ceiling but not seeing it.

“I don’t know. Do I need a special reason?” Shunpei shrugged.

Dares let the moment hang in silence, digesting everything Shunpei had said. Then he emptied the bucket over Shunpei’s head. Shunpei jumped as if goosed. “Got you.”

Shunpei processed what had just happened to him. Then he threw back his head and laughed. “Fair play, good man, fair play.”

Dares felt the faintest hint of a smile tugging at his lips. It died when he saw Shunpei pull his jersey off.