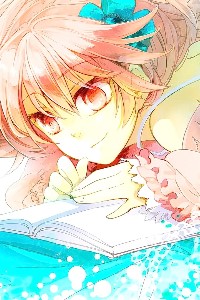 On a stage behind a podium, a really old man stood ready to give a speech or doing whatever a really old guy standing on a stage does.

“Dear students” oh he's giving a speech “I, Draco Virgo The Headmaster of the Aurora Academy, am proud to present the first year seven monsters”

Seven monsters? Does that mean he’ll bring out some chimera or some hellhounds?

Ooh, I really hope he’ll bring out a dragon, dragons are awesome!

Interrupted out his thoughts, seven teenagers step onto the stage behind the headmaster

“From left to right I will introduce them” the headmaster paused for dramatic flair. “Prince of the Faust Empire, Mephisto the III Pheles Faust” a handsome young man with long white hair tipped in black with fiery red eyes.

In that instant, all the girls seated squealed fawning over the prince

Girl 1 “prince let me have your children

Girl 2 “shut up your harlot he’s mine”

Girl 1 “what did you say slut”

In response to the girls’ fighting, the boys observed on in disdain while looking at the prince with hatred, envious and a few licentious glares