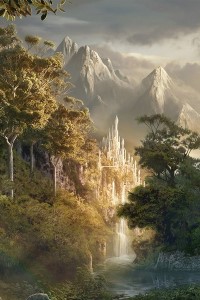 This was a hard chapter to write since it was really brutal to imagine all the shit happening.
Anyway, I hope you "enjoy" the chapter.

Just at the moment when Eric had gathered enough energy to stand up and take a bath a high pitched scream entered his ears and woke him up from his dazed state which he was in since he came back from his work on the field. He walked over to the door wondering what was happening on the outside when the door caved in and crashed right into his Erics face. The force of the impact threw him back with such force that he landed on his back and knocked his head on the hard floor.

*ughh* "what the fuck was that?" Eric groaned while he tried to get some focus back into his vision. Everything seemed to swim and a veil of fog surrounded everything.
Just as he was gaining back a part of his vision something else hit him in the stomache and nearly made him vomit in pain as he tried to catch his breath. His eyes became clearer and clearer by the minute but now he had the issue of not being able to breath properly. It felt like an amboss was placed on his chest. He tried to move back by robbing over the ground but couldn't get very far as someone grabed him by his shoulders and pulled him up into a standing position. Now he was finally able to see eye to eye with his attacker.
He was startled to find out that it was a group of soldiers accompanied by a man in a dark blue robe.
By the looks on their faces he new that they viewed him as something worseless, like a bug they could squeeze beneath their feet anytime they wished.

"Are you the chief of this "village"?" the question come from a man with a rat face who spit out the word village as if he was talking about a piece of crap or something similarly disgusting which he would under normal circumstances not even take knowledge of.

"May I ask how I can help you?" He tried to build some bridges with humbling himself so that the damage done could be kept at a minimum even though he felt his inner self cry at the man in front of him with the rudest insults he could come up with.

"We are looking for something and we know it is here so there is no point in lieing to us. Believe me, I will recognise a lie when I see it so you should answer me truthfully.

Eric kept his mouth shut waiting for the inquisition of the rat-man, how he started to call him in his mind.

"The mages in the academy perceived a high amount of magic coming from this place and they mused that it had to be a nexus, a point where the magic is especially strong, so we came here to find that supposedly existing nexus before the other cities could try to do something that we don't want to happen. So tell me "chief", do you know anything about a nexus?"

The rat-man stared Eric in the eyes to take note of every possible change therein. Secondly he put is left hands middle and indexfinger on Erics Carotid artery to check for a rise in his puls while keeping up the staring in his eyes.

As he was doing this Eric finally had some time to muster his inquisitor a little. To his surprise he saw that his pupils had a violet glimmer inside of them. As soon as he saw that he looked at the other people surrounding him and saw the same phenomenon inside of each persons eyes but it seemed they were oblivious to this fact.

"Hey, don't space of and answer the fucking question!" hissed the rat-man through clenched teeth obviously trying to restrain his growing impatients.

Eric snapped back to him and said: "Honestly i don't know anything about such a Nexus. I don't know how magic works, I'm just a simple farmer besides my position as chief. How could I possibly know something like that."
"And even if I did i wouldn't tell you you scumbag of a capt'n." He added in his mind just to calm his inner raging self down.

A few seconds passed and the capt'n kept on staring into his eyes. "*tchhh* what a waste of time. Men dispose of him and then get back to work!"

"Yes sir!" They answer yet again in unison.

"Wait, what? You can't do this to us. We are legimated citizens of this country. Who the fuck do you think you are?"
While yelling Eric started to run rampage in a desperate struggle to defend his life. Meanwhile the capt'n and the mage decided to just leave him there and leave the house to look for the nexus he guessed.

Eric managed to free one of his hands from the grip of one of the guards and used the momentum of his free arm to place a swinger right inside the face of the guard on his other side who still held his second arm tightly.
The force of his swinger swept the soldier of his feet and threw him on his back. Eric, now free took the chance to attack the guard of hand number one but that one was prepared by the time he arrived and they started to wrestle for supperiority. But no matter how strong Eric was he was still nothing more than a farmer. one of the other three guards pulled out his sword and attacked him from behind while Eric was occupied with wrestling guard number one.

A sharp pain slit down Erics back which he realised originated from a long diagonal cut on his back placed from his right shoulder to his left hip. Knowing that he had to do something he tried to move the guard he wrestled with between himself and the guard with the sword but by the time he managed to do so he was surrounded by the rest of the guards all coming for him with pulled out weapons.
One sword cut his tendons on the back of his knee making it impossible to move. Another one cut his over his broad chest making blood flow down his stomache painting his clothes and the ground red.
He fell on his knees unable to stand up and fight any longer.
"Fuck, I hope Cait could escape this disaster. Hopefully she didn't run back here when she heard the noises. But knowing her she probably had to help." He smiled a sad smile knowing that this were his last moments of life and he regretted not being able to spend more time with his beloved wife which had become the whole purpose of his being.

Just as he was closing his eyes in preperation of death he heard loud steps rushing up the veranda of their house runing right into the capt'n and the mage that were on the way out.

Eric looked up and dicovered in horror that his wife, the love of his life came rushing in trying to reach him.
But just as he wanted to yell at her to run away as fast as possible a sharp pain errupted in his chest. He looked down only to discover that a sword had pierced his chest in the middle penetrating his heart.
The last thing he perceived before darkness surrounded him was a sharp anguished scream coming from his wife Caitlyn, than darkness came and took him away.

Caitlyn was rushing through the rain that wiped her in the face and cascaded down her black her which stook to her head and back like a second piece of tight clothes.

While running she thought of all the bad things that could possibly have happened one worse than the other and she had to muster up all her strength not to start crying in painful anticipation of what she would find in her village.

Soon she had reached the village and what she saw was worse than everything she could possibly have imagined.
Dead bodies strewn across the streets while screams of pain and fear of some women echoed from inside some houses which were clear indicators of the horrors that took place inside the houses.

She kept on sprinting as fast as she could with her trembling legs that nearly gave in in fear for her husband.
As she reached her house she saw the door being busted and rushed up the veranda just to run into two men who were as startled as she was. She tried to ignore and rush past them but one of the man grabed her by the arm and pulled her closer. She managed to free herself and kept on stumbling forwards past the men.

Then she saw him, her husband Eric. Kneeling and bleeding from several cuts and bruises all over his body.
Just as she wanted to run over to help him to her horrify a sword came from the guard in his back and pierced straight through his chest.

Cait felt like someone pierced her own heart as she saw her husband die in front of her.
An anguished scream slipped out of her throat filled with all the pain she felt at the moment just to be drowned in her sobbing cries as tears streamed down her face.
The love of her life, gone. It felt like the pain would never leave her and suffocated her to a point where she felt the warmth of the fainting rushing over.

But just as she was about to faint a hand grabbed her by the neck and mustered her from top to bottom.
The man that had kept her from entering from before held her tightly and she could feel his arousel press against her body which he was lusting for indicated by the violet shimmer in his eyes.

She felt disgusted just thinking about this man being inside of her and tried to free herself only to be held tightly by two other guards who turned around and pressed her hands against the wall so that her back faced the rat faced man.

She struggled and tried to move with all her strength but could not move.
At some point she realized she had no power left to resist and could only endure.
She heard the rat faced man nestle with his pants and felt her skirt being lifted and her chest being ripped open.
As she felt him thrust into her she finally felt the warmth of the faint surround her and drifted away into a safe space where she was left alone and could find peace of mind to mourn for the love of her life that had left her.