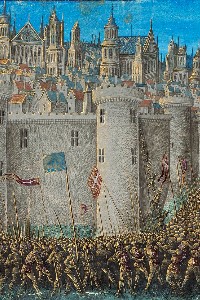 I wake up, rubbing my eyes with my hand while I get up from my cot, moving towards the armor rack with my studded leather on it, pulling the straps of my armor, and marching towards the gate.again, probably to clear out the Woodshadow den. Damn bastards got a low level hunter yesterday and now the Huntmaster is pissed I bet, better check my status.

Yep, still like normal, I wonder what I should get when I reach level 15, though these bloodshadows are shit for XP,  Cap said that 15 is more of a filler level for him, not grabbing anything really useful like sweep, or what he got at 25, Honor For All. Damn that things good, though it seems to only be useful when you are losing, buffing everyone below the level of the target, and debuffing everyone above but yourself.

Pulling on my helmet as I exit my room, I make sure that my sword is still sharp, I feel my thumb run across the edge testing that the blade is sharpened well, unlike when I fought with those Giblins as my blade just broke bones instead of cutting. though not as good as it could have been, though it will work. I open my door, hearing it creak as I exit, as i break into a jog towards the barracks.


I hear my footsteps pound along the path, a premonition overwhelms me as if the hands of fate are turning, sweeping me within their flow. As if I am a patch of dirt that has just been blown in unable to resist, knowing something will happen but not what.


I reach the gate, knowing I can do nothing to stop this cruel whim of fortune. I see plumes of smoke rise from the forge, a weird occurrence seeing as old man Borris should only be starting up his forge now. He always wakes up at the same time every day. I quickly sprint to investigate when I hear screams of panic, a cacophony of crackling flame and screams tear through the  forge and other workshops.

I hear Borris’ powerful voice ring out “FIRE!” as he quickly shouts at people to form a bucket line. I join the hastily assembled group of men lining up to throw buckets onto the tannery, hoping that the substances within don’t set the whole town alight in a deadly explosion. I tell a boy who seems to be struggling to lift a bucket to get the mages, in response, he nods and runs off towards the mage’s residence.

I quickly turn back to the line, passing up the buckets from the well towards the front, as others come back which the man next to me passes back to be filled once again, I just pray to Telatha that the fire doesn’t spread to everything.

The tannery explodes, debris blasting out and raining in a storm of fire and brimstone on the firefighting crowd, and other buildings, I dimly notice rubble launching towards the apothecary as I move to dodge 3 pieces of wood as they fall towards me, launching myself into a roll to my side.

I quickly feel my body roll across the stones, I quickly get my feet under me, prepared to dodge another piece of the now combusting tannery, I lean to the side, feeling the wind as a large piece of wood whistles by me. the heat licks my skin accounting for only some of the sweat dripping down my body. I see the last piece hurtling down in my direction like a shooting star. I swiftly throw myself backwards, evading the only chunk of the tannery left seemed like it was aiming for me.

The head wizard arrives, with tears falling from his eyes, shouting incantation after incantation, almost suffocating upon the words as teardrops and ash coalesce in his mouth. The tears seeming to form slowly as he casts more and more spells. While he puts out the tannery and forge, the fire spreads towards the residential areas of Geldin, I call every man to action as we run, grabbing buckets upon the way.

But they flounder about, yelling and panicking as only a few experienced guardsmen grab buckets, and I leave a private behind to rally the townspeople, I run as fast as I can, shouting to anybody that will listen to join us in putting out the fires before they destroy everything.

Men compose themselves behind me as the guards forge ahead, they follow behind, a few score of men carrying buckets as Blewin, or the head mage, and his two apprentices that arrived run beside me, we make it to the residential area, with guards already surrounding it, throwing buckets with some efficacy, as we reach there and start to quench the flames, encircling them and dousing them with vigor.

The day ends, as evening dawns over a still smoking city, the hunters return, and the guards all within the city walls.