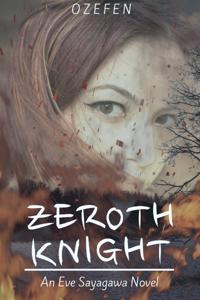 The changes to Eve aren't stopping. What could it all mean?

“Alright Voltin, we have to go about our business today. Make your way home like a good boy and-” Rose reaches between her breast and pulls out a coin, “buy yourself something sweet.”

Why is that where the money was?

“All right Mama! I love you!” Vol says while swinging his arms around her neck and placing a kiss on her cheek.

He hops off of her lap and waves energetically while saying goodbye to us. And with a pitter-patter of tiny feet, he flies out of the room.

At some point, Mimi made her way over to the chair, off to the side, in front of me. Once she's in a comfortable position, she asks me to face my back towards her. I slide around in my chair, now facing sideways, when I feel Mimi’s hands running through my hair.

“You have beautiful hair Zero,” she says while continuing to run her hands through it. “It’s a beautiful red.”

“Our colors will make for the most beautiful hair on our children,v this makes me audibly sigh and repeat what I've said time and time again, “Mimi, we can’t have children.”

Mimi’s breath seems to hitch and she mumbles something about, “Of course. How could I have forgotten?”

Mimi seems lost in thought for a moment and pulls on my hair a bit too hard.

“Ouch,” I let out, and almost immediately Kay is in front of me, staring daggers at Mimi.

I feel Mimi’s hands tense up behind me and lightly tug my hair more. This time I don’t make a sound as I wince. However, it seems Kay still manages to pick up on this, and reaches out and grabs Mimi forcefully by the lower jaw.

She’s pulling on Mimi’s face with such force that Mimi can't resist dropping my hair and standing up.

Once Mimi is on her tiptoes and looking up at Kay, “You hurt the Zeroth again…” she says. Kay’s meaning is cold and clear; and the hair on my body stands on end.

If there was ever a “murderous voice” then how Kay sounds right now would be it.

I turn around and see Mimi, unable to talk, but with tears on her cheeks. I reach up to touch Kay on the elbow and say, “Kay, please let Mimi down. It was an accident.” The moment the words leave my mouth Mimi is falling down onto the floor.

“Yes, my Lord,” Kay says and moves away from Mimi, while still standing guard over me.

“Are you ok?” I ask, reaching down and touching Mimi on the shoulder. She winces at my contact and I pull away.

I turn to Kay with an exasperated look, “You shouldn’t be mean to your friends Kay,” I admonish her.

Kay, however, tilts her head in confusion and sends a dangerous look at Mimi- her eyes make it clear that the girl on the floor is no friend. Rose clears her throat and for the first time seems to be ready to get involved.

“Kay-love, please go fetch the documents for our outing. We’ll be leaving in just a moment.”

With a nod, Kay is out of the room without a second glance at Mimi. I get down on my knees in front of Mimi as she’s finally getting herself under control.

“Can you finish putting up my hair please? I’d like if you would.”

Mimi’s amethyst eyes glisten from the tears of pain welled up within them, and the hope of being able to help me again. She looks at me, cautiously, but with some hesitation, nods. To her surprise, I simply turn around and sit where we are. With a giggle, Mimi once again begins combing my hair with her fingers, before putting it up in my usual ponytail with both skill, and precision.

When she’s seemingly satisfied, she lets go. I stand up and offer my hand to her. She takes it, smiling, and pulls herself up. While Mimi preoccupies wiping off her skirt bottom, Rose puts her hand on my lower back and moves me into the living room.

We arrive at a full body mirror in the living room and Rose comments, “You look divine my Lord.” I look into the mirror and for the first time since I’ve arrived here, I’m able to get a good look at myself.

My red hair is up in a neat, feathery, high ponytail courtesy of Mimi. My green eyes look back at me with a harder look than I’ve seen before. Perhaps being in this world, and the horror of the past months has done that to me. I can only imagine how these eyes would reflect in those of the people in my world. However, if I had to guess, it’s not something they would pick up on.

Violence is mostly unheard of in my world, not really because we've reached some kind of Zen state, in which all people are at peace. No- no, violence just doesn't really happen besides the rare case of emotionally triggered violence.

That's one of the things that sets me aside from my world. Being in a family, and indeed the heir, to what is essentially one of the very last bastions of confrontation, tends to have people give you a wide berth. Often they fail to understand that what we do, we do for more than just being able to induce pain- but to protect.

What we do is more personal and rewarding than simply being able to hurt- I would like to say. But honestly, I was a pretty crappy heir; and now I'm the heir to nothing. My grandfather is probably at home, alone- literally. I was all that he had left and I upped and disappeared on him- on everyone.

But all of those thoughts are leading me nowhere and so I refocus on the image before me. My outfit isn't one I recognize. My top is skin tight, and missing its sleeves- almost like a vest. It's a deep black and is partially open on the sides and shows a part of my ribs. It's adorned with red buttons from up top where my modest cleavage starts, down towards my waistline.

Each arm is presented with a half sleeve made of a soft, silken-like material. They're each looped around a middle finger and trace my arm up just above the elbow- not technically connected to the rest of the shirt.

Further down, my pants- yes, they are pants, bordering on capris, though I shouldn't have imagined they'd have a skirt laying around for the Zeroth. They match the shirt-almost-vest I'm wearing and are a black onyx color, made of the same silken, yet sturdy material the rest of the outfit seems to be made of.

They too are form fitting, and carry themselves down my legs, stopping an inch or two below my knees and topping, or perhaps bottoming off the whole package, is a set of what I can only imagine are some kind of military boots. They look rugged but mostly new and run up from my toes to just a few inches below where my pants end.

“Simply divine” Rose repeats as she comes around me and fiddles with the top button- undoing it, and redoing it several times over as if trying to decide which would look better. However, after just a few repetitions she stops, with an intense glare on her face. Her brow is furrowed and her eyes crinkle in anger. After another moment of this, her face relaxes and Rose says, “Yes... you have...”

Leaving that sentence in the air, she runs her finger down my chest lightly, and through a portion of my cleavage before coming to a stop. I'm honestly not sure how to feel or how to reply to that. Usually, I'd either got lost in the feeling of being touched, or mad that she seems to have forgotten again.

But honestly this time, I'm neither. I'm merely confused. Rose's expression makes it apparent that even she is having trouble understanding why she forgot. She trails back up my chest and fiddles with the button. After a moment of thought, she seems to have settled on leaving it undone- allowing my breasts some room to breathe.

As if waking from a daydream Rose quickly snaps her head up and meets my gaze with her beautiful blue eyes. “You are a... pretty woman?” Rose says in a tone that's more a question.

“It’s funny, you know… you’re so very much a woman,” she says while stroking my cheek, “and yet… hard and supple,” she says while running her hand down my arm, feeling the contours of what muscle I do have from a lifetime of training. Her exploration, intentional or not, sends shocks of pleasure through me. To allow someone to trace my being like this would have been unthinkable not too long ago. And yet, here I am.

Rose continues, “So why is it that I keep… forgetting to notice that, my… Lord?” She lets the last part delay, lingering at the end as if questioning my own take on it all.

Rose is staring at me so intently that I know it is a very, very bad idea to stay in this position; yet against my better judgment, I entertain foolish thoughts with action. “I don’t know Rose,” I say while cupping her hand in mine.

“Why is it that none of you can see me? And yet, I can’t unsee you?” I bring her hand to my lips, and gently place them on her knuckles. Rose blushes, but it’s not like before. She’s not very giddy at this. Instead, she seems almost melancholy.

Rose looks over my shoulder to check the time, and almost immediately her eyes glaze over. After a moment of that, she turns to me and says in a hushed voice, “My Lord, it is about time for us to leave for the Academy.”

Who knows what information they'll find at the Academy! Stick around for chapter 11!

Bio: I've spent most of my life with a story in my head, wanting to be told. But the environment I grew up in wasn't conducive to this mind of thing. Its only now that I'm older, and with a push from a good friend, that I start my journey to write stories I enjoy. My only hope is maybe some of you will enjoy them too.

I'm aware I'm not the best. But I will improve, given time and critique.

Currently life has gotten hectic due to summer apprenticeship so I'm releasing as I can. I am also updating older chapters to make them flow better, and to just be more structurally sound. The core of the information will remain the same, but I feel like the older content isn't nearly as whatever level of, "acceptable" my current content is.