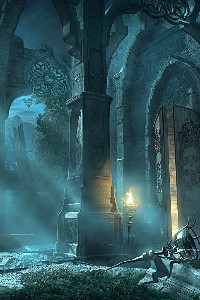 This work has been dropped- because I am rewriting it.  Look forward to the new and improved "A Broken World," now available HERE on Royal Road!

Three thousand years ago, Demonic creatures invaded the world.  Though their power seemed irresitable, a band of heroes managed to steal the knowledge of summoning rituals and worlds from them and created, "The Millenial Summoning."  A powerful magic that would bring forth a being from another world with the power to change the world forever.

The first being summoned became known as "The Speaker," and he brought the power of the Gods with him.  Teaching prayers and invocations that blessed humanities legions and began to push back the demons, founding of the "The Church of the Spoken Word" rose to power and a stalemate was reached.

Two thousand years ago, that stalemate was broken by the second casting of "The Millenial Summoning," and the arrival of "The First Sorceress," who taught humanity the basics of magic and enchanting.  With the power of the Sorceress, the mages, and the priests the tide turned and the Demonic hordes began to be shoved back, signaling hopes of a golden age for mankind.

One thousand years ago, the hopes of final victory and a new dawn for mankind were dashed by traitors who slew the participants of the ritual and took their places, using the ritual to bring forth a godlike being from the demons home world, "The Demon King," for no human knew his name, erased millenia of growth reducing humanity to barely a fragment of its former glory.

Now the ritual is being cast again, and a new being is being summoned...

In our world, after nearly two decades of studious work, Luke Jaeger is making his dream come true.  Working and going to school full time, sacrificing his health and social life in his youth, Lucas obtained Doctorates in genetics and virology, as well as associate degrees in business and accounting.  The modern world is not easy, and despite it nearly driving him mad from stress, this was the bare minimum he needed to be approved for a business loan to start a company focusing on commercial genetic therapy.

Despite the challange of getting his business running, Lucas feels that his work has finally paid off.

Lucas's car never left the banks lot, nor was Lucas ever seen again in our world.

Any story that includes some science gets me excited about how it will be incorporated. This story has incorporated it nicely. While the MC Lucas is annoying at times going off about how things wouldn't fly in his world, or how his actions are low-key sexist but, he's getting better, and is overall an intersting MC. To address any sexism it would have been better for him to sit down with someone and disscuss the differences between societies instead of always bringing it up.

Lucas being angry all the time is getting a little bit wearisome, it was justified at the beginning of the story but, its starting to make him a bit of an ass and kinda boring.

Despite having so many chapters the story still feels like not a lot has happend. However, the story has shown improvment in style and structure. Definitely worth giving a shot.

Excellent, but watch out.

The world  is interesting.

I like the characters, their personalitiies are very realistic, as are their interactions.

The politics is realistic and fascinating.

I love your work, you are doing it right, but as you continue to write please don’t fall into the trap of thinking darkness and despair = interesting and complex

keep doing what you are doing, if you avoid the trap I would even buy the completed book

A breath of fresh air in the summoned hero genre, no op MC, no cheat, just a truly normal MC.

The story isn't anything new, a normal guy is summoned by the people of another world to help them fight a war against the demons, BUT as I said above, the MC doesn't have any cheat like abilitie,and before you ask,no he doesn't have a "ability that seems weak but is actually a cheat ", he is truly normal. Another thing of note is that this World has no system or another form of seeing stats, so that's a point for "originality".

The grammar is good, I haven't found a word that was written wrong or in another form of narrator/time, also there hasn't been any moment that the flow of the story feeled(is that a word?) Weird.

The characters aren't all fleshed out but they aren't just a blank board that only praise the MC or do as him says without questions. The MC isn't the Stereotype of a hero, he just helps the people of the world because the demons may have the way for him to go back to his home.

I can tear through a 1000 chapter wuxia novel in 12 hours. Your 10 paragraphs take me less than a minute to read, and on a big monitor I can literally see all the text in the chapter without scrolling. You don't need to up your writting quantity at all, literally just stitch a few chapters together and release less frequently. You got a good story though, but right now I can read all of your 14 chapters in about 10 minutes, which is just plain not enough. Keep up the good work, and if you can make your chapters longer I would gladly be a loyal reader. But right now, I would consider your first 13 chapters as one, and the 14th chapter as the beginning section of chapter 2.

Extremely small chapters, wih a lot of PoV changes. As a result, there's a lot of chapters of nothing happening. And those are the intersting ones. There were a couple of straight into dump chapters, which is the authors way of asking the reader to skip forward.

The story itself is quite mundane, and the MC is a know-it-all ass.

And overall, this is what happens when someone tries to write a clever/intelligent character. It can only be as smart as the one who writes him. The author does his research about the facts, but the actual MC behaviour is more reminiscent of a moody teenager rather than the scientist entrepreneur that he wants to be.

I like what I have read so far. Really interested to see where the story is going!

If you liked Release that Witch from qidian, you will probably like this.

Unlike RTW, our MC is not an engineer, but a bioengineer.

Overall the story is good, the science fiction is cool, the magic is neat and the women are hot.

Give it a read. You will be entertained.

I dont consider myself too good at explaining my thoughts so ill just straight up say this and hope people understand what i mean. This story is so frigging awesome. It has a great mixture of comedy and seriousness that makes it incredibly hard to stop reading. Also i dont know if the scientific parts of it are facts but if they are its absolutely amazing because its just sciency enough to be cool without being so sciency that its boring, you know? Like theres technical stuff in there but its just enough to sound serious without it becoming science technobabbal that i cant understand.

Really nice by rrl standards, keep up the good job!

Author notes get a little bit annoying though, do remember that no one comes here expecting pro writing.