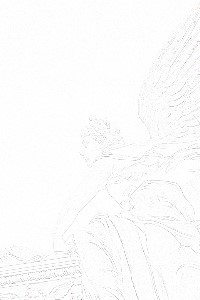 The first thing Orson felt was thirst. Terrible, consuming thirst. It was like he had become a desert, desperate and begging for even a single drop of... water?

No, not water. Orson felt sure that he didn't need any of that. What was it then? What did he crave so badly?

"Welcome to the tutorial", Jackson interrupted.

Orson jerked back to reality. He had been so enveloped in his thoughts that he had failed to notice that he been taken to a completely blank space. In all directions and dimensions, there was only white. Orson even found it hard to find what exactly he was standing on.

Looking down, he noticed that his feet had become longer and noticeably paler, ending with disgustingly yellow toenails. Wiggling his toes a bit, he confirmed that he could still feel touch. Indeed he could, and Orson found that his new skin was a bit more sensitive than before. The "floor" was neither warm nor cool, feeling strangely fragile, like one misstep could send him hurtling into whatever was below. The thought was disturbing.

Raising his hands up, Orson inspected them. They were white as well, with no noticeable scarring or discoloration aside from his creamy yellow nails. He flexed his fingers tentatively, trying to notice every fine difference from his old body. He made a fist with his right hand and noted how it clasped together firmly.

He was never one to favor form over function. Many of his clothes were unfashionable and old, yet strong and well-made. Despite his pragmatism, Orson found his new body to be slightly sickening. He appreciated its power but wondered what his friends and family would think of him now.

Looking around again, Jackson was nowhere to be found. The source of his voice seemed to be from all directions.

"Yes, very good", the AI's sourceless voice encouraged, "Please get acclimated to your new Ghoul body, Mr. Berenth. It will be you for your time in [Monarch], so it is imperative that you be able to use it to its full potential."

Accounting for the time dilation, it would be fifty years before he would be allowed to leave. The mere thought of a timespan that long intimidated Orson. What would he even do during that time? Who would he be after he left the pod? He shook the thought from his head and decided to continue the tutorial.

"Okay, what's next", Orson's questioned in his new voice. It was rough and coarse, like a chainsmoker trying to imitate Batman.

"First, we will be building your identity", Jackson answered, "Let's begin with your new name. What will it be?"

"Hyperion", the Ghoul responded simply. It was the name he always used in an MMO. Maybe an old guildmate would recognize him... before they slit his throat for another level. Orson was beginning to hate his situation more and more.

"...Strange. A nocturnal beast named after the Titan of Light", Jackson remarked, "Would you like a last name?"

He thought about it for a bit but ultimately said no. No last name really fit well with the first.

"Next is allegiances. As a monster, these will be very different from a regular player", Jackson explained, "There are four factions in that govern all monsters. The first are the Ancient Ones, beings of unknown origin and power whom grant their devoted incredible power in exchange for a portion of their soul, they number the smallest out of the four but are arguably the strongest. Second are the Grenarr, a loose confederation of beast-kin and 'intelligent' monsters ruled over by Divine Beast Iatha. They have the best relationship with civilized society out of the four factions. The third is Gathal, a kingdom of mostly orcs and goblins with a hunger for conquest. Finally there are the Monks of Yatzso, a reclusive group of monsters seeking enlightenment in the Parthal Mountains.

Of course, you can choose to be independent as well, which has its own benefits. No choice is set in stone, but you may find changing your guild to be difficult."

The Ghoul rubbed his chin in thought before asking, "How do the factions like [Takers]?"

"Unfortunately, all four share the same sentiment as the rest of the world: [Takers] are abominations", Jackson answered.

Orson cursed silently. He had hoped that monsters would be bit more understanding of his class. [Takers] were certainly a loathed existance, thought to only exist because of the God of Trickery's interference with the class system. Once it became known that a player was a [Taker], heavy bounties were placed on their head by high ranking Church officials, oftentimes leading to them being killed dozens of times until they quit the game. It was general knowledge amongst [Monarch] players that choosing to be a [Taker] was tantamount to social suicide. Nobody wanted to party with somebody who would be assassinated in a moment's notice, after all.

It was despite all of this that Orson chose it. In his year researching the game, Orson found that with the right planning, [Takers] could become overwhelmingly powerful. The only six [Takers] left in [Monarch] were all in the top 10 power rankings. The only problem was surviving long enough to gain that power. Even if you could stand getting killed over and over again, you would lose a level everytime you died. Ultimately, the sheer pressure was too much for the large majority of players.

"Wait...", Orson halted his thoughts for a moment, "Nobody has ever mentioned that Boss Monsters had classes. No, I'm certain that some players tried classifying them with high-level analysis skills. Is it some kind of magical interference blocking their full information? So that means... nobody will know I'm a [Taker]??"

That certainly would be a boon, not dying every two minutes.

"I'll be independent for now", Orson finally said after a long pause.

"Alright, you can pull up your status now. Just focus on the word 'status' intensely", Jackson advised.

"Don't worry, your mana stat has not been unlocked yet, but that doesn't mean you won't ever have it", Jackson pre-emptively said, "Now you can pull up your stats in the same way."

"My stats are impressive for level 1. They say that even Olympic-level athletes aren't twice as fast as a normal human, so that would make me a meta-human", Orson thought happily, "Although, people who have been playing for a year would make this amount look downright pitiful. Those guys are truly monstrous."

A low growl filled the air. Whirling around, the Ghoul came face to face with a wolf. Raised on its haunches and emanating pure menace, the beast's lips curled up to reveal a set of razor sharp teeth. Orson recognized the emotion behind its midnight black eyes: hunger.

Both figures inspected each other, slowly circling their new opponent. Orson noted how its muscles glided from step to step, exuding savage power ready and begging to explode at any moment. This was no ordinary wolf.

Orson glanced at the screens before assessing the situation.

"The Dire Wolf is probably a bit wary of me, seeing as how it didn't just attack", Orson hastily noted.

With no warning, a violent urge rose up in Orson, unlike anything he had ever experienced before. The feeling was slickly sweet like rotting flesh, thrumming in dark rhythm. Engulfed in the treacly instinct, the Ghoul suddenly leapt forward, much to the beast's surprise.

Expecting to be tackled, the wolf bared his fangs, prepared to rip Orson to shreds the instant they collided. Yet that never happened.

Orson landed beside the wolf, instantly launching a kick toward the beast's torso. The blow landed with a solid *thump*. The wolf yelped, with more surprise than pain.

Pushing his advantage, Orson sprang his hand forward, stabbing two fingers into the Dire Wolf's left eye. The fingers were only met with a slight resistance before puncturing inward. Spewing blood, the wolf reeled backward and howled in pain.

The sharp noise only seemed to incense the Ghoul further. Narrowing his eyes, Orson welled up what felt like a massive force in his legs, pressing downward like a spring with a heavy weight on top of it. And he sprung.

This time he really did collide with the wolf, but unlike before, the wolf was not prepared for it. The two rolled over each other, accumulating dozens of scratches in the heated struggle. It wasn't long before the wolf found itself upside down with what was supposed to be its prey choking out its life from below. Orson held the Dire Wolf's neck in the crook of his right elbow and had his left hand on the beast's skull.

The wolf flailed its limbs, struggling desperately against the increasingly tight hold. It was no use. No matter how many times it clawed Orson's arm, the Ghoul refused to let go. Orson tightened his grip until it felt like the exertion would rip his arm in half.

The beast let out a pitiful whimper, finally slumping over. The fight was done.

Tossing aside the corpse, Orson laid still for a moment in shock.

What had come over him? That feeling... it was unnatural.

The Ghoul's right arm was in tatters from the Dire Wolf's final attempt to escape. Despite being mauled to bits, all that flowed from the grisly limb was a slow thick flow of... something. Orson didn't quite know what it was, but it had the color and consistency of maple syrup.

His stamina was close to bottoming out, yet his breathing was not ragged. In fact, he wasn't breathing at all! It was at this moment that Orson realized that Ghouls don't need to breath. He sighed in relief. Or he would have if he could.

Orson pulled up the screens that had appeared during the fight.

That was incredible news. Skill trees were a major source of power for all players, offering incredible benefits for every point invested. Orson was especially thankful for the unlock as [Takers] did not get a skill tree, unlike the other classes. This tree in particular looked strong. He quickly assigned the point he earned from unlocking [Analyze] into <Savage Might>.

Seven stat points for one skill point?! Orson had never heard of such gains in a newbie's skill tree. "The description seems a bit edgy", Orson said, "But I'm not complaining."

All at once, Orson's body buzzed as he felt the stats go into effect. His muscles pulsed with a newfound power and resilience.

"Wow... so this is the difference stats make... I feel like I can shatter a boulder!"

After basking in the glow of his gains, Orson remembered the most important part of an encounter for a [Taker]. He glanced over to the fallen beast and trudged over to it.

Extending his left arm towards the corpse, Orson welled up his willpower.