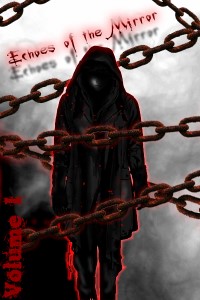 Echoes of the Mirror

If one walks through the abyss, they do not come back unchanged...

After losing his father at the delicate age of 8, Haku is left in the small town of Hira with no one to call family.

Being a town made solely of Summoners in a modern world of magic, he grows up bullied and shunned by his peers and community for failing to accomplish the simple act of finding a pact-spirit.

Adopting a bleak and pitiful mentality, Haku is finally brought to a breaking point... He makes the rash decision of forming a pact with a demon, forcing him down a dark and gruesome path that will make him question his sanity and humanity.

I've decided to stop writing 'Echoes of the Mirror'. After hours of grueling over the writing, I've learned that I no longer have any interest in this story, and am not the proper author for this genre. That being said, I've decided to move on to a new project named 'E.O.T.M', containing many of the same characters, personalities, and themes that you've enjoyed in this one.

At a later date, I'll end up pulling 'Echoes of the Mirror' altogether, including in it as a Patreon perk (if my new project is successful).

Thank you all for your support, and I look forward to interacting with you in the near future!

The review is a little overdue since I had a bunch to complete first. I had reach until Chapter 5 of your story. I wanted to help you since I could see lots of your emotions invested in creating this story and I wanted you to actually grow this story and finish it.

I had read that you wanted to do is a LN style and whatsmore being influenced by the Japanese culture (I assumed that is so since you had been using lots of Japanese name; Hira/Kira/Hamari etc.).

However, to most readers, your style reads like an Eddic poem which actually did not help you much. In LN (using Nohingo), paragraphing is not an issue since that's how their language is written. But once you do it in English, it had become somewhat messy to read. It was more poem-like rather than story-like. Most of your paragraphs (99.5%) are just, well 1 sentences long.

My suggestion is to varied it out for the readers sake. Just a little here and there would do us justice. I used to write my story like yours but after a few readers told me about their problems in reading my story, I changed a little.

If you ever had the chance to read a movie/drama scripts, your style just reminded me of them. Just dialogs and dialogs line and minimal of other things. But a movie/drama scripts would be acted upon. A story meanwhile would play in the theater of our mind. We would need to imagine what you are writing, instead of seeing actors playing that role.

You said somewher than if your story was an anime, this was how you wanted it to pan. And therein lies the problems. You rely too much on how we would potray your style inside our mind rather than you showing how it was acted upon, on your story.

Fact-paced yeah but don't mistake fast-pace for messy pace. When you do that battle scene in Chapter 2, I was hoping for more oompphhh. As in to say I could cheer for one of them. Though I might not know who the fighters was, I would usually cheer for the one I think had the most 'guile' for me. And of course, the crowds must get going.

You battle description lacked these. I could not feel excited, nor get my adrenaline pumped. It was just looking at two people slugging each other but before that, comes the usual trash-talking of opponents.

When I read your story, I could not engage myself further. Immerse myself. The battle was plain. The naughty scene was plain. The interaction between character was plain. Why? Because my mind wandered off. It has to do with your style too.

5 Chapters in and I had yet to understand why all those people can summon the pact-spirit. I think it's about time you actually tell the readers how your fictional world works a littl. To have school catered for summoners meant that the summoners in your world are a big contributor to the nation. But I had yet to see this. A little backstory of how summoners could play such an important role would be helpful. Just a paragraph will help us to tie all the pieces of information you scattered around within your story.

Good with mistakes here and there. Who doesn't right? I too had the same problem as you. The only thing is to keep improving and once we are better at our craft, come and change the older chapters.

This is a generous score. Your characters are interesting, multi-faceted, and 3D. Not 4D mind you since everyone lacked that certain depth. This is where the descriptions come into play. You put minimal descriptions, your characters and world lacked the depth. Especially your MC and supporting casts. The others are alright if you do not want to do anything with them.

But hey, the way you developed your characters are at the top 10% in the site. I had read a lot, reviewed alot and I'm quite pleasantly surprised to see your characters come alive. that 3D to 4D is to elevate your characters into the pinnacle so that when people read your story, they could really feel it.

One word of advice if I may. Never fall in love with any of your characters. Big mistake. If you do not understand it now, perhaps when you write more chapters in the future, you will come to understand it.

A good attempt of creating a fast-paced, action style LN. However, careful consideratioms must be given since it's written in English and not Japanese. You don't want to make it sound like 'haiku'.

That aside, the story itself is pretty solid with good characters playing their roles well.

The best part of this story is the characters.  Haku himself is very gruff, and sort of mean, with a wild temper.  But the first person perspective really allows us to explore his feelings, his motivations, which gives him a lot of depth.  As we see him interacting with the other characters, there's a lot of strength in the way that he talks and acts.

The style was very brisk and fast paced, with a lot of dialogue and minimal description.  I think the story itself could use a lot more detail on the setting and the emotions that Haku is feeling, but maybe that's just me.

The grammar is probably a little above average, and it's not bad compared to a lot of what I've seen on here.  But it still needs a lot of work.  There were several mistakes that really distracted me.  Grammar doesn't really affect my opinion of the story, much, though, so I try not to pay much attention to it.

The story is facinating, and it's a really creative idea.  It's not very different from a lot of what I've seen on this sight, but none the less, you handle it in an extraordinary way.

If you're doubtful about giving this a try, then I would say, definitely try it.  It might be for you, it might not, but it's definitely worth reading.