Reina bit into her roasted chicken sandwich and sighed at the flavors caressing her tongue. She'd been camping outside a cave for over a week and this was the first real meal she'd eaten since accepting her current job. Which normally wouldn't have bothered her since she was used to it at this point. But, there was a slight... complication, this time around.

"Morning beautiful. Did you miss me?"

Reina blanched at the voice and suddenly her appetite was gone.

"Oh, sure... Let's go with that." She folded a brown cloth around her sandwich and returned it to her bag. Then she stood up from the old log she'd turned into a make-shift chair and turned to face the owner of the voice; He was a twenty-something-year-old human, slightly over six feet tall, with sun-kissed skin, chocolate colored eyes, bright white teeth, and short black hair. His chest plate, gauntlets, and pauldrons were all polished to a mirror shine, and his long-sword was inlaid with gold. Overall, he looked like a rich guy with more money than sense. However, that wasn't to say he wasn't a skilled adventurer, because he was. His appearance was a conscious choice because-

"Enough to give me a kiss?" He winked. Yeah... He did it to impress women. Even his leaving her to watch the cave was so he could go into the village and 'conquer' a woman.

"Not even if I wasn't married."

He pouted at the cold response but quickly recovered. " Aw, I think the lady exaggerates. Surely you, a woman of such beauty and youth, would prefer to be with a knight such as myself. Than whatever boring man has chained himself to you."

"It takes two to make a marriage, Leon." She grabbed her cloak off the ground and shrugged into it. "And I'm quite happy with my mine, thanks."

"My marriage is not up for discussion, Leon." She grabbed her scabbard, satchel, and Mag-pistol holster off the ground and wrapped them around her waist. "Now, you hired me to keep you alive while you cleared out this cave. So can we get this over with? There's a warm bath waiting for me back at the inn."

"Ooh, Reina, I didn't know you were so forward."

"Sorry, let me rephrase that, I'm going to take a bath, alone, and if I see you anywhere near my tub I'm going to castrate you."

The two walked into the cave with Leon up front and Reina following several steps behind. After several tens of feet the cave grew too dark for them to see, so Reina pulled a small magic powered torch out of her satchel, turned it on, and handed it to Leon.

"Nice! Say, do you have anything else in that bag you want to show me?"

"The knife I'll castrate you with."

"As a fireball to the face. Wanna see?"

"Umm..." He coughed. "Oh! I think I hear something up ahead." He widened the distance between him and Reina and pulled his sword free from its scabbard.

Reina rolled her eyes at the display and took a swig from her water flask. It was missions like this that made her regret joining the adventurers guild eight months ago. Sure, it was a source of money and information. Of which she needed both to find her way back to Earth. But, as soon as they found out she was a healer, she was 'forced' to take missions such as this. Granted, by 'forced', she meant they'd annoy her until she agreed.

At least the pay was good; With the money she'd make from this one contract, she could feed herself for a month and still have enough money to buy a temporary Bi-Frost pass. A ridiculous concept considering Yggdrasil's branch was technically owned by no one.

The three main Kingdoms of Yggdrasil Dadora, Lusan, and Shazar had come together and implemented the 'Bi-Frost pass' system after some kind of monstrous serpent attacked a Lusan guardpost around one of the higher branches and escaped through the branch. To prevent them from being overwhelmed and similar occurrence from happening again, the three kingdoms set up a massive outpost around every branch within their territories.

Guess they figured it was better to work with their enemies than to allow monsters to roam free inside their territories.

"Speaking of monsters." Reina saw a group of short humanoid lizards with tiny stones on top of their scales.

"Damn." Leon whispered and he and Reina plastered themselves to the wall.

"And? Have you ever tried to slice through a creature with stones for scales? It usually doesn't end."

"Use a hammer." She shrugged.

"There's a slight problem with that plan... I didn't bring one! Stone Kobolds usually make their nests on fire element worlds, so finding one on a water element world is not only rare, it's damn near impossible."

"We could just ask them."

Leon looked at her as if she were insane. "I didn't realize you liked being raped, killed, and then eaten. And not necessarily in that order."

"Yes, the reason I was contracted to clear out this cave is because the village has been under siege by this clan for a while now. I just wish they'd told me beforehand that I was dealing with Stone Kobolds."

"Would you have charged them more?"

"Of course, I charged them for a tier two contract. While normal Kobolds are a tier two threat and almost any group of experienced adventurers could clear out a nest of this size. But the stone variant is a tier three threat and only specialized groups can deal with them."

"That's probably why they didn't tell you. Villages of that size don't usually have stockpiles of gold they can use frivolously."

"But this isn't a frivolous contract! If they'd hired some other adventurer to clear out this next they would have sent them to their deaths!" Leon yelled.

His voice alerted the kobolds to their presence and they began yelling. "Intruders! Intruders!"

Inside the cacophony of voices, Reina could have sworn she heard one of the Kobolds yell, "Not again!" But surely she was just imagining it, right?

Leon pulled a small buckler free from the small of his back and tossed the torch to Reina.

"Time to see if you're worth all that money, eh?"

"Oh, sure." Reina threw her cloak onto the floor and pulled her mag-pistol. "But just remember that I cannot revive the dead, nor can I reattach limbs. I'm a healer, not a miracle worker."

The kobolds charged through the narrow halls of the cave and were quickly met with the flashing of steel and energy bolts fired from a high-powered mag-pistol. Leon managed to hack and slash his way through four kobolds and Reina shot another six before they were pushed back by a tidal wave of angry three-foot tall lizards. Three of them pinned Leon against the wall while another two took turns beating on him.

Reina shot a charging kobold in the head, then frowned at the sight of Leon on the floor. "This is why I said," She shot another one. "We needed more people!" She shot three more kobolds in the chest, shot one in the knee and then shot it in the face, and then she was hit in the side with a club.

"Oh, that is it! Her left hand glowed a bright blue color and she jabbed the kobold in the throat, causing all the muscles in its throat to tense to the point of asphyxiation. Then, she kicked it into an oncoming group and yelled  "Earthen Binding!" A wave of blue magic left her hand and filled the hall and flowed over every kobold in sight. A scant few seconds later, the very rocks of the cave came alive and, after stretching like rubber, wrapped around their limbs and pulled them into the walls and floors of the cave. She clenched her hand into a fist, "Earth burial." A low crunching sound filled the halls as the kobolds beneath the stones were killed and Reina dropped to her knees in exhaustion.

Leon groaned in pain, "Can we discuss this after you heal me?"

"Because I forgot to add in the stupidity tax! Seriously, what kind of pompous asshole thinks he can take on this many tier two beasts alone!?"

Eventually, Reina recovered from her exhaustion, healed Leon back to fighting condition, and the two finished clearing out the few Kobolds remaining after their hallway battle.

Reina and Leon would then head back into town and turn in the completed contract; As proven by the glowing stamp on the contract papers turning from red to blue, to the village elder.

"Well, that's my contract complete." Reina told Leon after counting out her part of the gold and returning the rest to him. "Take care of yourself."

"Reina, wait!" He put his hand on her shoulder to stop her from leaving.

"Of course." She smiled at him.

Her smile caused his heart to skip a beat and he grinned at her. "You know... That bath we were talking about is still on the table."

"Goodbye Leon." She turned on the spot and walked away.

"Yeah Leon, She's totally into you." He thought while staring at her retreating backside.

Despite Reina telling him to stop following her multiple times. Leon continued to follow her into the forest and far, far into the future. Reina had gained her first of many friends in this new world... Even if she didn't know it yet.

If you're wondering what Reina's Mag-pistol looks like, the just think of this 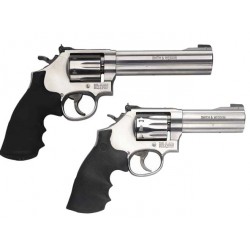 But in all black.