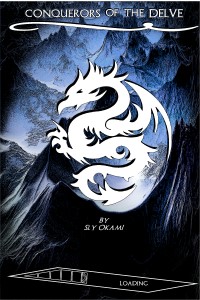 [Conquerors Of The Delve] [Abandoned]

28-year-old Lucian was a smart and hard-worker, having put aside enough money since joining a family friend's company at the age of 16. But with the company now bankrupt, and no way of earning a scholarship, he finds himself not employed, educated or in training.

While browsing the web, one thing consistently popped up, overshadowing all else.

An Augmented VReality game, a dungeon delver residing inside an Open World MMORPG. A game that granted the players a hand in the game's geography, architecture and community, allowing them to build their own world. The economy was also interchangeable with real currency. Items could be freely sold and bought, with both in-game money and real-life e-cash.

But what truly caught his attention were the game rules. For they allowed him to be what he wanted to be and do what he wanted to do without any real-life repercussions. Kill, Rape and Pillage. The only people who could stop you were players who possessed the ability to do so.

This story is good.

As of chapter 6, this story has /doesn't have the following qualities...

Style: At times there are some infodumps, which could have been intervoven better. Sometimes the descriptions are also lacking. The writing style however doesn't distract from the story, and as such is worth roughly 3.5 stars, with an outlook for more. Because this is the beginning, infodumps tend to happen, with enough plot revolving around to distract.

Story: The story is the main attraction of the novel - if you are looking for one. The VR genre taken into a new context where players decide and shape the world to what they want. This a bit cliché story was put into a wholly different perspective by the author, where companies try to decide the VR world, and players in guilds outwit each other. I sense a good story beneath, and will change my review if this shouldn't apply any more. 5/5

Grammar: No obvious grammar mistakes spotted, no obvious sentences who struggle to stand on their own, as well as a nice flow. 5/5, because this is a novel which could use more attention, else 4.5/5

Characters: A good amount of characters have been introduced by chapter 6. All of those are easily distinguishable from each other, and this is also definitely a strong point of this novel. However, some of them appear to lack depth. The characters only really have one or two words describing them, they lack the flesh of a human. Also a couple of maybe-realistic scenes end up getting destroyed by the characters for the sake of the story.

Overall, this novel definitely could use a lot more attention, and will surely turn better over time - where the author doesn't feel the need to infodump any more and flesh out the characters. I can't say for sure how the style will turn out, but right now it's not giving the full immersion the story could give.