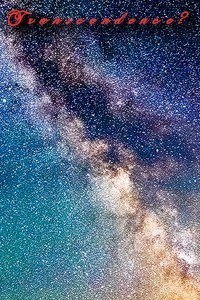 Transcendence? is a novel about reincarnation, love, hate and war. And everything else that's included. It follows the main characters, as they climb to the top of their society. And lose their humanity in the process to become something beyond human. It's settled in the same universe as Until death?. It can be seen as a prequel. But I plan for it to be a stand alone book. Nobody has to read Until death? in order to enjoy Transcendence?. There will be cool chapters, sad chapters, romantic chapters and funny chapters. Of course there will be boring chapters too. I believe that some explanation is necessary in every novel. Though I hope that there will be more funny chapters. How a chapter turns out always depends on my mood.

Seen quite a few people write 1 popular story, only to try their hand at another and realize they only ever had the capability for a single story.

Thankfully, you have not only avoided being like these people, you did so without having to strain yourself into an impossible situation as an author.

With Until Death? you created a setting for both the chimeraen world, and the multiverse as a whole. Working on that premise you chose to tell the story of something that happened prior to your last, utilizing a concept that you are already thoroughly versed in and have all the ability to continue building on. Looking forward to future installments.

I give this a hesitant 3 stars.

I only managed to read up to chapter 20 before I had to stop and put it down. I couldn't take another moment of that cringe-inducing romance.

Never really been one to comment on grammar. As far as I am concerned, as long as it is not written in text slang, I am happy.

No complaints from me on this subject.

As for the story itself, interesting premise. Hardly unique or original but written well,  flows easily and manages to keep you engaged throughout the chapters.

When Celestial (female main character) comes onto the stage around chapter 10 the story takes a MASSIVE, irrevocable nose dive in quality.

What was a decent reincarnation tale, suddenly becomes a truly cringeworthy rom-com about two immortals.

Too quickly are they portrayed as teenage brats constantly bickering with each other as they struggle over who has the power in the relationship. I'm assuming the author deliberately intended this in an attempt to give a feeling of  'romantic tension'. However, while I am not opposed to romance in novels the author fails to realise that they went overboard.

Romance needs to be down to earth and realistic in their portrayal. As it helps connect to the characters on a deeper level.

These are two immortals. Don't you think that they could have some modicum of composure, maturity or at least apathy for each other? rather than resorting to childish pranks or drugging? why would they allow to take such treatment from each other in the first place?

It makes no sense and detracts from the overall plot & story flow.

Ultimately, the story devolves into chapters devoting themselves to discussing how pleased Celestial is about being a gold-digger and how she is going to manipulate the male MC next  - drugging, blackmail etc.

Ascathon on the other hand, although irritated by her, choses to maintain an aloof nature towards her antics.

Despite previously being portrayed as a character too old and bitter to take crap from anyone.

Like the majority of non-committal male protagonists these days, he soon becomes incompetent and 'pussywiped' for lack of a better term. Unable to retaliate against the superiority & manipulations of the female MC (because all hail the feminist collective). Despite her being the sole antagonistic persona in the first place. She shows no reflection or remorse.

Ok to waste time on a slow day, but don't take it seriously.

If you invest yourself in the characters or story you will only end up tearing your hair out, trying to avoid the cringe inducing sections. I.E. the 'romantic tension'.

I hate Celestial, She too "S". But the story is superb!!

The story is good as always but celestial role and action in this make me can't smile.

I can only say she is too "S" for my liking. If you compare her with celes, she just act violent without the reason and sometime out of the line for me to accept. Celes still have the reason of the quarel she have with Anthoron for many years to act violent agaisnt him and in the later half she did not act that violent anymores.
I just wish everytime celestial will change or go out the picture when I read this.

Let's get to the point.

One of the best fictions on RRL, written by the best writer himself. Now let’s get to the point.

Style: I like the writer’s style of presentation, narration, etc etc more than any other on RRL. 5/5.

Grammar: Not the best but definitely free of errors and mistakes. 4.5/5.

Characters: The best characters ever.. I genuinely mean it. I would infact overrate it if possible. 5/5.

Overall: A master piece, if anyone picks it up, I would not mind buying the manga lol.. 5/5.

To the writer: I worship you.

To the potential readers: Read at your own risk. You’ll end up ruining your day.. Yeah you’ll probably end up skipping on your work to continue reading this.

First of all Thank you for the 'Until Death'. It look like Im going to enjoy this too, 5 star nuff said.

This was going so good but at this point it sucks

I really enjoy andurs books i practically binged until death and demons tale but this is just bullshit.

Ever since celestial comes along she suddenly controls the story? Nopes for me.

It was seriously soo good until the whole revenge amd marriage thing came along.

This is because i did not write 50 words

I'll be honest, I had high hopes for this one. Not only does it have an immense amount of positive reviews, it also has a high rating.

Too bad I'm very disappointed, I only read 5 chapters since that was all I could bear. It feels like this was written by a twelve year old. Okay yes, English might not be the author's native language, but it isn't mine either & I have read stories way better than this.

There's not much left to say, just try reading a couple chapters and you'll see what I mean.

Final note: seeing something of this quality having such high ratings and so many views, says a lot by the people who read fiction here.

The world is rich, detailed, complicated, and full of discord and plot potential. The main characters are interesting, and if I hadn't read Until Death? yet I'd certainly praise their depth, though I find the supporting characters seem to be getting very little development besides the Sky-General of Mist.

With my knowledge of Until Death? I'm quite happy that this story has so far, and likely will continue to, focused on a single world in the multiverse, and that we get to see an earlier state of Ascathon and Myrm. I'd like to know if this life is before or after their time as Johann and Sandra, as well.

The only real criticism I have so far is that a few too many relationship-specific character traits are being used that were also used in Until Death? to the point that it would be impossible for them not to have remembered this incarnation. I guess it could be explained that it was simply a conversation they had "off-camera" so to speak, or that they both miraculously lost these memories at some point in the cycle of rebirth. I just find it bears too much resemblance for the lack of a mention, especially when Angrod and Celes were discussing Johann and Sandra - or after the nature of their first time together.

Man, it gets confusing when the earlier incarnation is written about after the later incarnation, especially when you're trying to keep it as spoiler-free as possible...

Criticsm. But keep your works. it can be better.

1. Too many monolog. What are you a chuni? Why u always insert a lot of monolog? If monolog style like a descriptive or narrative then it is fine. But your style is like a junior kid writing his essay with chuni style.

2. Lame JOKES!  Why you use lame tones and expression like “wait-WHAT#?” ; “(normal dialog), FUCK!! WHY IM ALWAYS IMPATIENT! “. Something like that.

3. Too many badwords. FUCK!? Each chapter has 3-5 FCK WORD. Not count the other badword.

4. And each chapter. You deviated from previous one. For Exmple : “give me nuke, a small grin appear” then in next chapter u change The serious tone to Joking one. So the nuke didnt appear. It is simple example. You dont know how many complicated example that you’ve deviated.

5. Please. Even your Fiction for FUN. At least mix it with serious plot. 35-40% serious and the rest for fun. It is too monotone man.

6. Too many dialogs. Is that an OPERA?! Reduce the ammount of dialogs and add more narrative/descriptive inner thought or view or something. Even if it is for fun,if you keep your persistent style, your FF’s reader will be boring to the hell.

For comparison, if u’ve  watching commedy TV or movie. Every episode have too many jokes not even serious one. How do you feel? Take example of mister Bean, monolog,quiet,sad,angry,fun,serious. All mix in one. In the end. We all still loves it until.now.

Or you read a novel with too many lame jokes or too many serious plot. It will be boring.

Please. Consider it. And inspect your self,your writing style will be a mirror to your personality. Because it is a FF not heavy novel or smething. 84% authors of FF in royalroad are newbie, so their personality will be mixing with their writing style. Except for expert. Are an expert?

Thanks. And your welcome. Sorry for my rudeness.