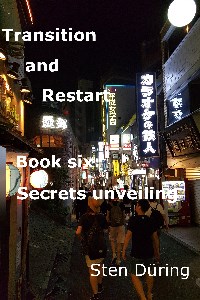 The secret of the arrivals. One that Ulf Hammargren had searched for since he became one of them but also one that was kept from the public.

As more secrets unveil he unwillingly accepts why they have to be kept hidden, but when Principal Kareyoshi starts hurting his friends Ulf is caught in a moral dilemma as Christina Agerman uses her fame to bring down anyone would harm those they love.