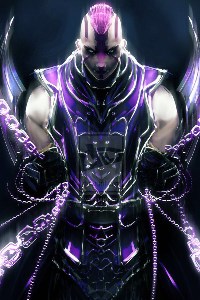 Sebastian was shunted from sociecty, seen as nothing special until one day, he gained a power above all who looked down on him. The NEET system. This is the story of him becoming The Ultimate NEET.

I am not writing this "review" to hate on you or anything like that, I would like to see you improve because of your mistakes and polish or rather rewrite your novel into something you would be proud to say that it's worth to read. I will mention many things so it would most likely spoil some things for you, read at your own risk.

I will start with something positive, your idea of story isn't something new, there are a couple of similar concept, but it is still fresh and will attract readers.

Now many negatives, I will try to point out everything I remember, let's start with the grammar and style, then characters and story.
English is not my native language so I am not so picky about grammar, but if there are so many mistakes then it's painful to read. Try to read everything you wrote and correct it, if you suck at it then try to get some help, either by trying to get someone else to check it or by using programms to do it for you.

For style I can't say too much, you only wrote 8 chapters so it's hard to say if you are improving. There is nothing wrong with writing everything short and simple, but too many colloquialisms will lower the quality of your styke by a lot. Beside that you should try to describe characters and places where they are. By describing characters I mean physically, their personality you should show by their actions. If you as an author can describe the characters and places only by something like this: "he is ugly", "it's a cementery", "they are in a forest" then everything about the story will be fuzzy and not memorable, so people will read it then forget it because there is nothing that you can remember about it.

Now for the characters, the main character is noone worth remembering, he is ugly, for a few chapters, because he got handsome quickly thanks to his ability, then the only thing I can remember about him is that he is complete moron, despite playing RPG games he seems like complete noob about everything, the only thing he could do was ask AI "What should I do?" and then do it...
Since I mentioned AI let's point out how bad it is, it was created thanks to MC wish so it seemed like it has immense gratitude to the MC,(I can't even remember his name...) but it's acting completely illogical, one time it's acting as a loyal servant of the MC, one time it's acting like it doesn't care at all, the constant "whatever" just completely broke it's personality.
It's similar to the MC's childhood friend, she is supposedly grateful to the MC for being always by her side, and treats him like a brother, then her other side, she got a boyfriend for two months and he decided that she has to break contact with MC, she did it instantly, and she went to apologize to the MC for what she did after he didn't come out of his room for 5 months, 5 fucking months, just what? She teoretically doesn't mind the ugliness of the MC, but the only reason she likes her boyfriend is that he is handsome and popular, again how does that make sense?

Let's get to the last part, story, it doesn't make sense at all, you got a dude that got rejected by a girl, he is praying to the god for 5 months because of it and god got pissed off by it and decided to call him to his realm/room or whatever, and becuse MC yelled at him he granted him a wish. Just what the fuck, you know how many people daily pray for so many things, and you decided to get that as a reason for god calling him? It's more believable that he got crowned as a most ugly being in the universe by the gods, they pitied him and granted him a wish. He got a second wish by provoking a god, he literally said that how could so powerful god grant him only one wish, and the god got caught up in it like a dumbass and decided to let him choose a second one.
The last thing concering story I can remember for now is that you don't really have any idea for this novel, you don't know what you want to write about, you can't even come up with what creatures to place in the killing zones. As I said earlier you don't probably even imagine how that place looks. You should play some games, read some books or the textbook for some RPG system(if you don't know what I'm talking about check "paper RPGs") then continue writing novel, for now killing zones are pointless, it's not entertaining at all, you could as well grant him points to level up by sleeping, dancing or playing games.

It looks like the only thing you are sure of is that MC is great, his childhood friend is a bitch, or at least was, now you decided to make her not so bad bitch that will probably end up with him. Main point of this novel is wish fulfilment, MC got super handsome, powerful, rich, he will get his revenge, he will amaze the school, he will get some girls, probably the childhood friend too. It's all good, I don't really have anything against stories like these, but you have to make it entertaining. For now it's boring to read, I hope you will come to some conclusion from what I wrote and improve.
I will stop my rambling now, good luck.

The story is quiet good so continue it and write the most possible because you will improve a lot if you write a lot. Take the good criticism and just forget the bad one.

The grammar is not pretty but I can understand it so it's good for me.

Take your time to developp the character the idea of childhood friend is cliche but good. But you need to build the emotional side better, it's rather plain.

I only read 8 chapters so it's possible that the story will dramatically change.

But for the moment I love it so please CONTINUE.

I agree Athame and i would like to see this story continue for a really long time.You have a great idea and i hate stories with a lot of potential to just stop. Pls continue and i believe in you. Yours truly a fan from day 1

For the love of god, learn to write.

The concept is not new, or creative at all. But that could still be a good story if the writing was better. I’m sure you could do much much bette if you feed your raw text to grammarly or some such. Also something to improve; your expression sucks. The MC talks like a 3 year old and you lack apropriate linking words. I is not readable in this state.

No real story. The author breaks the fourth wall constantly, the grammer hurts my eyes, and the premise is rather... 'I'm gonna go get strong and beautiful to get back at people in school, especially the girl who turned me down!'

The gammar in this story needs to go to church, and reading this felt like I was taking a challenge to see how far I could get in the story while being tortured at the same time. I whole heartedly wanted to become a gammar nazi after this.

On a positive note the idea, and story are great, but it feels like the author read a bunch of similar novels, but doesnt understand why the novels have certain elements in them. For example if your character is the only one in the story with the system, and the only one with access to monsters, why in the hell did he ask for double exp? Just give him the vaules you want for killing monsters theres no reason to even ask for double exp, whats he comparing it to. The AI says he's "too weak" to kill skeletons up front, so he should surprise them, but then he one hits them, and the AI says its possible if you hit them in the head. The MC prays to god for 5 months and just gets what he wants cause he annoyed GOD. GOD, who listens to billions of people at a time, gets annoyed at one person for praying for 5 monhs, makes no sense. You also dont understand comedy enough to write it in a story, and you characters interact like they are mentally challenged. Anyway the idea is good, nothing new for sure, I like the genre alot, and if this could get rewriten it would be awesome. You need a editor badly, and should probably write out were you want the story to go before you keep writing. Really I just wanted to write a helpful review to up the quality but the more I wrote the more I remembered.

Have English as a first language? Don't read

You had a bad start with a entitled ugly freak with anger issues who does not get any better and becomes less and less appealing to even follow any of his actions as it goes on. The grammar is quite bad, I am guessing English is not your first language.

My advice is to abandon ship to those who want to read this, there is no perception of pacing in this fiction and the characters are dull and witless, and plot devices are thrown in randomly because the author didn't plan ahead whatsoever before they started writing. Essentially brain barf style writing.

You can do it with an editor (I think)

Well, I'm not used at making reviews but let's start. The grammar is horrible. I don't say that my grammar is good or anything but it's still ok. The style is interesting to say the least. The story itself... I like it since it's a good read (at least for me ) when you don't have what to read.

The story is fine. It's a little cliche, but it was okay. Now, i like the MC being pissed off and being straight-foward, but he needs to sometime think before he acts about the consequences. I mean he has high-intelligence now. and the side-characters needs to be more interactive. Rather than being most of the times one-dimensional.  Yeah, overall the story is good. But, the characters needs a little development. Don't worry it's still not too late change that.

not a review, but, thanks for your hard work~

enjoyable, fun, your story is good at least for me.
and continue your hard work, i like to read this story to the end~