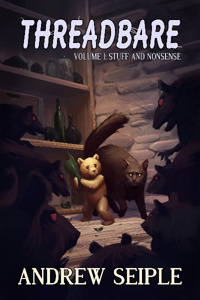 Remove
Original HIATUS Adventure Comedy Fantasy LitRPG Magic Non-Human Lead
Warning This fiction contains:
BREAKING ANNOUNCEMENT! Threadbare Volume 1: Stuff and Nonsense, Volume 2: Sew You Want to be a Hero, and Volume 3: The Right to Arm Bears are now available on Amazon.com! For US residents, you can find them at the following links: Volume 1, Volume 2, Volume 3.  Residents of other countries, please browse your local Amazon market.

Meet Threadbare. He is twelve inches tall, full of fluff, and really, really bad at being a hero. Magically animated and discarded by his maker as a failed experiment, he is saved by a little girl. But she's got problems of her own, and he might not be able to help her.
Fortunately for the little golem, he's quick to find allies, learn skills, gain levels, and survive horrible predicaments. Which is good, because his creator has a whole lot of enemies...

Advance chapters are now available on my Patreon, for those who wish to read ahead.
(Cover by Amelia Parris)
My name is Andrew Seiple, I'm an author and a long time roleplayer. I am the writer of Threadbare, and I own the rights to this story, and many others. I've published works on Amazon before Threadbare, but this is my first litrpg. You can find my various stories available on Amazon.com

Really punny with a lot of heart!

When I started reading I just could not get my bearings. How could such a good story pawsibly be so bearied in the rankings when so many teddy-ous stories make their way to the top?

I think prospective readers should paws, maybe bearicade their doors, and get comfy. I could go on but I don't want to embearass myself.

Threadbare's here to save LITRPG (and the day)

Never really knew I wanted to read about a teddy bear until this. Seriously, you've got goblins, sneks, doggos and all sorts running around in litRPG nowadays, but you wouldn't think the adventures of a teddy bear that isn't some reincarnated human would be so readable.

Incredible first volume, falls off a bit over time

Volume one of Threadbare was amazing, one of the best story starts I've read on RR. Unfortunately, like many others, I found that the second volume wasn't quite as good as the first.

I'd like to start of by saying that the grammar is excellent. Sentences are coherent and paragraphs are pleasant to read. No issues here.

Regarding style, I personally found that the author's writing style peaked in the first volume, as the way he portrayed and described the struggles of a newly animated teddy bear was incredible. Don't get me wrong, I found the writing pleasant to read in volume 2, but volume 1 was on a different level.

The story is where the big issues start to appear for me. I personally found the plot progression to be well paced and worldbuilding was very interesting, but the story took a very different approach at the start of the second volume.

First off, there's a 5 year timeskip. Many of the previous side characters are dead and Celia's been abducted by her evil father & demon "mother".

The interaction between Threadbare and his surroundings in volume 2 feels completely different from volume 1.

as he has basic human intelligence and the ability to speak. The way his decision making process was described was also a bit different.

This makes him feel just like a human and no longer like the teddy bear given consciousness that he used to be. This was honestly probably the biggest negative for me. In exchange, we get a huge focus on LitRpg aspects for not only Threadbare but many other characters. LitRpg elements are fine, but in my opinion it fell into the trap of having dozens upon dozens of active skills, with multipage long skill lists that are pretty damn difficult to keep track of. The combination of the MC feeling more human & the emphasis on LitRpg elements made the story feel much more generic/uninteresting to me.

Finally for characters. They were pretty fleshed out and had distinct personalities, but I found that volume 2 introduced some weird inconsistencies that I found difficult to stomach.

Some characters hardly changed (Zulla, Mad, Garon) while others, in particular Celia, felt completely different. I'm also a bit miffed about what was done with her. She gets captured by her evil father/mother who upturn her entire world around, then the next time we see her she's acting like a princess/knight in service to the king (her father). We're told at some point that it's because she's been brainwashed for 5 years.

The worst part for me was the following sequence:

She then leads a force against Threadbare and co and we get a somewhat anticlimactic reunion. Then she immediately gets killed by her demon mother but then reanimated as a doll shortly after and everybody pretends that all is well in that department, let's march off and stop the evil king frond doing more harm. It was all very sudden and kinda just... Hard to accept.

Surprisely a damn good story here. Not some disgusting cop out copy paste reincarnated person bullshit with half of every chapter being dumb stupid boring numbers and retarded skill nonsense. The primary character best of all stays within its means and character of what and who it is. This is among the EXTREME FEW non human protagonist stories out there and most important is not complete shit. Author is doing good so far and seems to have good direction and pacing aside from the later changes could have been brought out a bit later.

Synopis is actually good to btw

I absolutely love this story. It's charming, it flows, and I absolutely have to know what happens next. It is the one and only story that I've added to my favorites.

Style -  It's a well thought LitRPG, that integrates the LitRPG elements well with the story.

Story - I'm writing this at the end of the firat arc, so I haven't seen where it's going. However, I'm rarely so heartbroken to catch up to as I have been with this one.

Grammar - Pretty much perfect. The occasional typo, but otherwise consistant.

Character - It has several major characters that are all wonderfully complete, and also very distinct. The minor characters are not as easy to remember or sympathize with, but they work well with the main ones.

Up to the chapter "Winning Hearts and Minds" the story was great. A steady pace, just the right amount of detailed description and action.

The pace rushed from event to event, detailes descriptions were very few. Action was still there and good at that.

The charaters felt off from that point on. They all devolved into plot devices to show how great toy golems are.

Surprises stopped happening (I could tell 90% of the rest of the story afterwards).

The RPG mecanic became ... people calling out skills. There were still level ups and stuff, but unless I skipped back to the dreadfull explanation interludes I could not tell what was going on and even then I hardly could.

Then there were plotholes so massive that they changed the entire story.

And finally there were several instances of:

Oh, how I hate when an author uses that. Especially on charaters where it doesn't make sense.

Literally the ENTIRE conflict of the story could have been avoided if one of several people said something.

So yeah, stroy went from 4.5 Stars to 2.5. My guess is that the quick pace in which the author wrote threw a wrench in the quality of their work.

An MC with great Bearing

From the description I thought it might be similar to 'When a plush comes to shove'(A light-heated teddy RRL novel). This is anything but light-hearted, it is full of intrigue and suspence. The novel is 100xmore awesome and 20xmore gruesome. With well paced character and skill growth, this is in the top 10 litrpg's I've read.

it's no wounder that the rewiews keep swinging between winie the puh, padington bear and chucky.it's just that good.

the characters are all intricate, with their own dreams and motivations, and their interactions flow naturaly. The autor knows how to do show, not tell about it all, and forshadowing is done masterfully.

The storry manages to mix existential dread, death, lost inocence with sugary overdoses of fluffy adorableness and teaparties in a complatly natural way. Becouse OFCOURSE that is what you do when the necromantic midboss threathens to evicerate your special someone. it's just polite.

a much veirder but atleast as thought out system as any. some of the weirdest baseclasses i have ever come across (i mean, the Model class as a base adventure class? come on), but they work. it's even a huge part of the story, the secrecy and worth of the knowlage about high level jobs, and their unlocks.

Normaly, you would think that when an autor that is this big on puns and references, it would get straind really fast. but no. The puns work. extreamly well, even. even when the instorry characters point them out. Gramar is fine, with the occasional small mistake. way, way better than most on the site, on par with Iron teeth.

The story is about a teddy bear that has been given life by an Animator unknowingly. I never really knew that I wanted an MC that's cute and adorable until now. The teddy bears antics so far has been nothing short of extraordinary and fun. It is a lighthearted read which has incidents that escalate it to a full blown adventure story and none of it seems forced which is a plus. The information dumps aren't there. Character growth is amazing and the puns. By the Lord the puns just make this story even better. Give it a read. I'm sure any story with a cuddly bear with modeling class is pretty damn amazing. Like this one is.

Start great, then falls into mediocrity

Reviewed at: And Yet She Persisted 1

Honestly, I dont even know what I was expecting, but certainly better than this.

I enjoyed the first part of the novel, however, the second part ,

After he wakes up from hibernation

I dont mind reading average stories, but this story was hyped so much, I feel like I got into this with expectaions too high, and was disapointed when it failed to deliver.