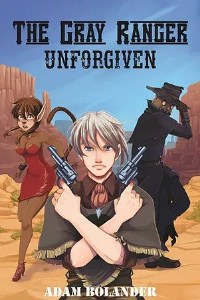 A Fishhook Hides Within

After first stumbling into this work, initial impressions suggested fairly typical fantasy centered on gunslingers instead of knights. This was an oversimplification.

Typos. How DARE anyone publish a work with “it’s” instead of “its”!? Some room for improvement here, but as a result of mistakes instead of categorically bad grammar.

Discrepancies of details. For example, at one point a character confesses to five-plus-two break-ins which he calculates as totaling eight. In his defense, though, he was on the way to being drunk, so that seems... forgivable. (I’m sorry.) A few similar cases elsewhere.

A couple of rough acclimatory patches, specifically in the vein of character X thinking something to the effect of “This is the absolute worst case scenario” several times in quick succession. It shook up the flow mental action to a distracting degree.

Explanations of some aspects of the world drag on a tad longer than expected. One prime case is when X explains to Y history and physics behind a certain... geolographical oddity, which resulted in them camping on the topic for a little while. Better too long explanation than the converse in many cases, but still something of which to at least be aware.

This is a story that starts off with one kind of skin: the tale of noble-conflicted-warrior escorting displaced-outsider-misfortunate from a strange land to a less strange land. That assessment is certainly true, but it’s also much more than that. Protagonists Kulgan, Adlis, and Za basically get thrown into a sack together, a sack of social ostracism and “we want to be somewhere else” and also guns.

As events unfold, though, it becomes rapidly clear that this is not merely a Man versus Nature conflict, but also Man versus Man. The actors aren’t merely parts, but obviously flawed individuals with basic and understandable motive, and changes born of their experiences rather than some eureka. Without going into too much detail, there is an evolution that grows naturally, builds up the characters into believably complex people, and also shows how nice an abomination against the natural order can be.

The natural order, which is to say the setting of this meteorologically fascinating place called Tassendile, is itself curious and well-characterized enough to be worth a gander. Perhaps not quite on par with Tolkien for shaking up the world, but intriguing nonetheless. Wildland desert on the one hand, lizard riding on the other. It runs a nice line between things expected and understood, like bandits and lies and sudden unexpected danger, and things like magic fueled by rock acupuncture. Eight-point-five out of ten moons, would moon again.

Perhaps the biggest draw, though, is the way it slaps down philosophical issues with very slightly different twists (not intentional this time, I swear). Of these, I found the subject of personhood a nice draw. Not so much nature versus nurture, but “where can I no longer claim events came from my decisions?” Quite a common thematic direction in fiction to be sure, and yet told in a way that makes one take a second close look.

Worth keeping an eye on, be this one. It looks milquetoast at first, but there’s pan-fried ham at its core.