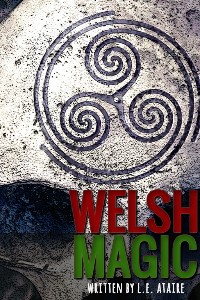 The Crymych School of Druidic Sorcery for secondary age girls and boys was one of the most prestigious institutions for learning Celtic magick in the entire United Kingdom, and perhaps even the world.

Yes, most definitely the world.

“Dammit. Explode!” She punched her desk. The pencil rolled off, leaving behind a trail of green goop.

Braith Evans chuckled and leant over to pick up Rhian’s test subject. She placed it back on her desk and brushed a blonde curl from her shoulder.

The freckled girl cleared her throat. “It’s like this.”

Braith locked her eyes on the number 2. “Ffrwydro.”

Shards of yellow wood splintered up from the desk. Rhian shielded her eyes.

“Honestly, I’m not sure why you’re having such trouble.” Braith shot her a lopsided smile before turning back to her own assignment.

Rhian grumbled to herself, mimicking Braith’s exasperated tone. She reached and pulled another pencil from a small cardboard box.

The school may be prestigious, but Rhian was far from it. Her grandfather had been a miner back before the ‘Witch of Westminster’ had cursed the mountains. Desperate for work, he settled in the English village of Bosbury. That’s where Dad met Mum, and where Rhian was born and raised. She’d been happy there. Bored — but happy.

Rhian pressed her finger into a bowl of gelatinous plant matter and spread it along the sides of the pencil. She’d been about thirteen when she discovered she could burn things with her touch. Her family still argued over who deserved the credit.

Mum claimed it was due to her familial links to the Knight Templar. But Dad said poppycock and insisted the ability came from his rich Welsh bloodline, which no doubt had a druid or two somewhere in it. Perhaps even Merlin, who, as Dad enjoyed reminding everyone, was also Welsh.

Whoever was to blame, her parents were enthusiastic for her to learn more about her power, bestowing onto them the privilege and prestige they now believed was lost somewhere between the ages. Her parents had even gone as far as to sell their semi-detached home to pay for the school’s entry and admission fees. They now lived at a caravan park in Cenarth as to be close by in case she needed them.

Rhian wiped her fingers onto her blazer pocket and glared at the pencil.

It was great that her parents were so keen, and that the exclusive admissions board of the Crymych School of Druidic Sorcery agreed with her father about her having a rich Welsh blood line.

There was only one problem.

The pencil remained perfectly in one piece, mocking her.

Rhian was a failure at Welsh.

She dropped her head into her hands. For all her father’s recent discovery of Welsh nationalism, he didn’t speak a lick of Welsh, and being raised in England, neither did she.

“Alright, class, that’s enough for now,” Mrs. Mackerel stood up from her desk. She was a stout woman with curly grey hair — American. Rumour was she came from a branch of witches that escaped the Salem trials back in the colonial days. She seemed nice enough. Clearly the whole witches are mean thing was the result of poor brand management.

“Your assignment for this evening is to study the composition of two common items and create a vanquishing potion for each.”

Rhian winced. As long as she didn’t have to actually ignite the potion she should be okay. She closed up the box of pencils and slipped it into her book bag.

“And remember,” Mrs Mackerel raised her voice several octaves, “the composition exam is Tuesday. All students are required to achieve at least a 40% mark to continue attending at this institution. Those who score below 60% risk having their entry status re-evaluated at the discretion of the admissions board.”

A soft murmur swept around the room.

Katie Phan cleared her throat. “Excuse me, Mrs Mackerel, but what about the students who’ve been absent, or miss the exam?”

The shuffling of students preparing to leave ceased. Attention turned to the empty chairs spotting the classroom. The number of absent students had been growing by the week.

Katie tugged on her blazer’s sleeve. Her friend, Julia Silva, was one of the students who’d disappeared.

Rhian’s house matron had assured her it was common for students to drop out around exam time. “The pressure of attending a school such as this it sometimes too much for some,” she’d said.

Rhian shifted her gaze to the tall arched windows, the grey overcast threatening rain. It wasn’t as if she hadn’t considered leaving herself. This was her first experience boarding at a school, and the first few weeks she had been desperately homesick. But knowing how much her parents had invested in this, in her — she just couldn’t. No matter how lonely she was, the thought of letting them down was ten times worse. Plus, it wasn’t as though she had a home to return to.

“The matter of retakes will be determined on a case by case basis.” Mrs Mackerel frowned. Rhian felt a bit sorry for her. It must be difficult for a teacher to have nearly half their class withdraw. Well, for the ones that cared at least, which she was sure Mrs. Mackerel did.

The period bell rang. Its high vibrations bounced off the stone walls.

“Don’t forget,” Mrs Mackerel called to the students making their way out the door. “I want two potions on your desk tomorrow. We’ll be spending the hour practicing ignition again, so be sure the items you choose are portable!”

“Bollocks,” Rhian swore under her breath. She pulled her bag off the tiled floor and headed for the hall.

Gretchen waited outside the door with a red squirrel she’d crafted sat inquisitively on her shoulder. “Uh oh, that face. Still having trouble with your Welsh?”

“It’s a stupid language.” Rhian muttered, careful not to be overheard by the other Welsher students. “Not nearly enough vowels. What kind of word is “Froydra” anyways?”

“Whatever.” Rhian shrugged her bag onto her shoulder. “You headed to lunch?”

Gretchen nodded. The pair cut their way through the flow of uniformed students toward the cafeteria.

“You know, I can help you if you like, with the pronunciations.”

Rhian’s eyes lit up. “Yeah? That’d be ace. Cheers, Grez you’re a star.” A weight lifted from Rhian’s chest. Although Gretchen wasn’t a native Welsh speaker, her family being from York and all, she’d picked up the language quite fast.

Gretchen smiled. “Are you still going for the scholarship?”

Rhian’s shoulders slumped. The weight returned. The Owain scholarship was awarded to the most worthy pupils. There’d be a ceremony, photo taking and most importantly a free year of tuition. “I have to try. Though my chances are slim to none.”

“Better than mine, surely.”

Rhian walked with Gretchen into the cafeteria. Bars of light from tall windows striped the crowded mess. It was more crammed than usual, without a spot spare on any of the tables.

“Want to eat outside?” Rhian crinkled her forehead. As unappealing as possibly getting rained on was, soggy sandwiches beat squeezing in-between people and bumping elbows.

“Sorry girls,” a voice cut from behind.

They turned to see the prim Ms. Landeg, the power controlling instructor for gifted students.

“I’m afraid the grounds are off-limits for the afternoon.”

Katie brushed past Rhian from the cafeteria.

Katie turned around red faced. Tears pooled in the corner of her eyes. “You were supposed to protect us, to —”. A sob escaped.

“I assure you Miss. Phan the matter is well under control. There is nothing to be concerned about.”

“Oh? Is that so? Tell that to Julia’s parents when they come to collect what’s left of her body,” Katie spat. She glared at Ms. Landeg and muttered a curse before turning around and storming off.

Did you enjoy this week chapter? Let me know.

Diolch! (That's Welsh for thanks.😉)

Bio: A recluse hiding out in the sheep infested hills of Wales who likes to write stuff.