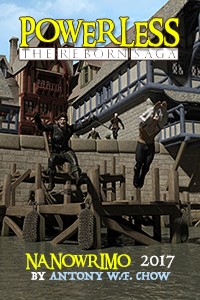 [PLEASE NOTE: The completed & revised version of POWERLESS has been published on Amazon Kindle & Kindle Unlimited.]

What happens when we die? The answer to this question becomes personal for a teenage boy who named himself, "Schmendrick," when he is reborn on a world named Sanctum. As a Reborn, he is thrust into an unforgiving society splintered between the Gifted, those blessed with Aether-fueled Powers, and the Powerless, who are treated as outcasts and pushed to live in the dangerous Recovered Land.

When the system decides that Smendrick has no hope of ever becoming a Gifted and casts him out as another Powerless, the teenager decides to leave Rezdi City and seek his fortune as a Scavenger in the wasteland known as The Shar. There, he makes a discovery that will change his life as a Reborn forever.

During his journey from Rezdi City to The Shar, Smendrick is plagued by dreams and memories of his past life. Who was he before he died and was reborn? How will these revelations affect his new life as a Reborn?

POWERLESS: The Reborn Saga is a science fantasy LitRPG story written for Nanowrimo 2017. The work contains strong language and it is recommended for older teens and up.

This story was written by Antony W.F. Chow, an experimental writer and self-published indie author (with the bulk of his works available on Amazon). The cover was created by Sid Ceaser (ceaserphotography.com), based on Dreamstime.com stock photo ID #26718419, Escaping from the Town Guard; and the original image was copyrighted by Algol. The image was used based on Dreamstime.com's Royalty Free license. All rights reserved.

This story had great potential it had a story to tell unfortunatly it had a very abrupt end exactly when NaNoWrimo 2017 ended.

The quality drop off began a bit further before  the anticlimatic ending however with the mistake leading to the MC's bad decision and rushed judgment forcing him to leave.

Alone this would have been a minior complaint yet the meeting with a certian creator or more specifically the incidents after this led to a very abrupt end.

i dont review many stories but i noticed this didnt have a single review so i felt i owed it one. this is a great story. its better written than a lot of books you will find on amazon kindle, let alone on here for free. a fair warning, the MC is kinda dark. not cruel, just cold. he has no problem killing anyone that crosses him. yet he doesnt go out of his way looking for trouble. still i highly recommend it.