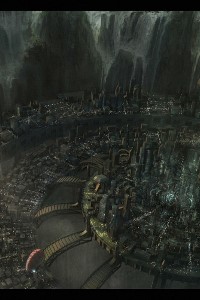 How The Weak Live

This was a rough draft. Quite a meh one. The newer version is These Games of Ours.

Lucious is deserter among many, living by dagger and beggary.

Argento’s thirst for knowledge is endless, as is his belly.

Kora is the perfect soldier, yet her sword grows dull in monotony.

Formally known as the Empire's legend, the Captain is now stuck in stagnation.

The Gods, grown weary of human deeds, have decided to indulge themselves in a different way.

If other LitRPGs are like Skyrim, then this is going to be a combination of Dark Souls and Total War. Don't expect action for the sake of action. Be warned, this is a slow novel. Read the reviews to see if this novel is a decent fit for you.

Disclaimer: I do not own that gorgeous cover art.

First off, let's sort out the positives. It's a good story and an enjoyable read, mainly for the following reasons:

1. There's great action throughout the story. Very well written, and an impressive amount of detail goes into each fight.

2. The characters all have potential to be really interesting and compelling. They have a backstory just waiting to be discovered that can influence their future.

3. It seems like there's going to be an interesting world. A few kingdoms, several cities, a not very nice government. The works.

However, while the story is entertaining, there are a few things that bug me and don't really let me enjoy it to the fullest extent.

1. The author says that the characters are going to take time to develop and get powerful, but within the span of about two hours one of the main characters was able to go from a street urchin deserter to a deadly warrior, taking ghouls out left and right. With silverware.

2. The author says this is a slow novel, but things are moving pretty fast for all the main characters. They are all getting some sort of powers and abilities from the system, and leveling up doesn't seem to be too difficult. The only reason this story may be seen as slow is because of the constant switches in perspective, which leads me into number 3.

3. Too many POVs for the first few chapters. There are four characters, and before you can really get invested into one of their stories, it switches to another. It makes it so that the story seems to lag a bit longer than needed, and it also makes it confusing about how much time has passed. For example, the army is still fighting ghouls, while it seems like the others are long past that and doing their own thing.

4. No one seems to care that the apycolypse has happened. Everyone takes this new system in stride and continues to do whatever they were before, even though literal ghouls came to life and slaugherted people while they gained access to a mysterious system.

5. There is very little explaination in several areas:

a. Why the system decided to come.

b. Who all the characters are.

c. Who those evil beings are and what their motivation is.

d. Why there is a war in the first place.

I'm aware that part of the fun is waiting to find out, but it isn't fun when there isn't any explaination at all. Even a teaser to tide us over and give us some context would suffice, but there really isn't anything. I'm left spending way too much time on trying to piece together a puzzle with half the pieces missing.

In the end, it's an entertaining read, but maybe work on the description you gave it on the title page, and maybe think about streamlining the story for the future.

So Good! Read at you own risk

I'm not gonna lie: This review is absolutely biased, not objective in the least.

Alright, now that that is out of the way I would like to recommend reading this to anyone who is sick of flat characters, uninspired writing and/or bad grammar. You won't find any of those things here.

Of course that means that the story lingers, gives you insights to the characters' thoughts, reflects on the happenings, builds up atmosphere and tension. That sounds good, it's nice to read too, but does not make for the (overly) rapid story development you might be used to from other fictions.

Read at your own risk, I am close to dropping a few fictions that are just not written as well as this ;)

A good apocalypse with a twist

I don't want to spoil anything so I'll keep it simple, unique twist on something that people already love i.e: an apocalypse story. Grammer is impeccable and can be considered the work of a superior being on this site. All that's happened up to chapter 12 is character growth with a bit of blood shed, so if you don't like that don't read this.

But yeah it's still a young story so I would like more Mr.Author person :P

Overall it was an enjoying read.

The grammar like Madhater said is really damn good. Most of the story does not contain action, but rather most imphesis on the world and the characters thoughts. At this point in time we got introduced to one character, Lucious, who seems a bit like an old cranky man with a small body, is a new twist to the female lolie.

This story so far leans towards more of beauty and what happens when shit hits the floor, than action scenes and MC level up.

a great story so far. not a surprise when the author is a fan of THE BLACK COMPANY.