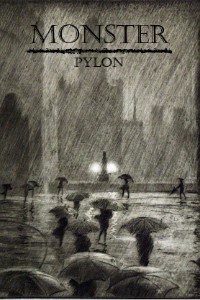 Monster is a novel set within the real world which slowly turns into a dystopia wrought about by an event known as the awakening.
The Awakening is a similar event as to other novels in which normal humans 'awaken' some sort of game system and unlock the method to gain power. Through the awakening, mysterious factions attempt to exert their influence over the geopolitical status quo and thrust the world into chaos to the battle between themselves.

The world's governments are collapsing within weeks as they struggle to maintain their prestige and lawful control over their sovereign territory. However, the governments also attempt to make use of the factions to fulfil their own questionable ambitions.

This story is set in Australia, a first world country famed for its dangerous wildlife and overgoverned society. The story is about a young man in high school who grows up in these tumultuous times.

Witness as he discovers more about his past and is thrust deeper and deeper into the moral abyss through the consequences of his own actions. What choices will he make to survive in the new 'awakened' earth?

An even bigger question for Adam... What is 'Adam'?

Art Credit:  got this from a friends stash who got it from somewhere in pinterest, aka I have no clue who drew this.

If the original artist of the cover has any qualms about me using his work, he/she only need contact me and I will take it down.

Review as of Chapter VI (6)

Monster has been a great and captivating read so far. The vast and engaging use of words to describe gestures and every day activities are nice. An example of this here being such as when he had depicted the emotional state of when he had succumbed to the notion of 'guilt' which was undeniably well worded. This part somewhat allowing for great character development, which is about enough as it should be as of now, although I felt it could have developed more.

The story takes a more darker path than most other stories, as it is based around the psychological aspect which I like greatly. This being due to his body posessing a somewhat alternate personality of sorts telling him to do some shady shit (Mostly killing). What I also worry about is that the protagonists alternate personality hasn't been explored as thoroughly as of now, but  i'm waiting patiently and hoping for more information regarding the background around it.

The only thing I no like is the slow release of chapters, although that does not make me dislike it greatly or at all majorly. Anyways, thanks for the read so far! (And remember this is my opinion, my view of the story, this means it may differ in contrast to what you think)

This novel is amazing, it is one of the first novels that came up when I clicked the surprise me button for the thirteenth time. I was about to skip past it but the synopsis hooked me, later on I decided to read the novel. I found that the shift from being a typical MC which tries to do good was fascinating and that the grammar was at an acceptable level with very few mistakes. The author did sometimes switch tensing between past and present tense every now and then however it wasn't very often, hence the 4.5 star score.

The novel constantly messes with the MC's mind with things and clearly shows how villains aren't completely black and that they are always a shade of grey or inbetween.

Yeah, this novel is good

Sorry but im at chapter V now and its just confusing.

First off the Goverment gets something done in 1 Week? sorry but that doesnt happen so fast if he were kidnapped for like 4 weeks okay.. also why was he knocked out for 1 week? you need to flesh out the story more than it might actually have potential to be good.. also how do factions form in 1 week seems rather unrealistic maybe slow things down in the begining let him train meditate find out about his mom cheating and stuff slowly with his powers. Also the Fight with the White Vigilant is not done well.

overall I like it it just that its kind of hard to follow so I stop. it was confusing why did he kill his mother again because she opens the door