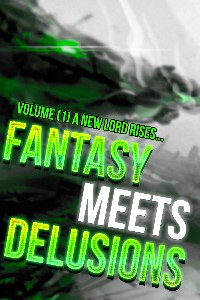 Given another chance to live Grain is reincarnated in a another world with fantasy races seen only in books, monsters the stuff of nightmares and newfound determination that is downright scary. That and unfinished dreams of his and his new allies he has to do everything in his power to completely crush anything that could dare make him lose the new life which he was bestowed with a terrifying new ability to bring many a number of delusions to life. And if those delusions become real the world won't just end - it will be utterly destroyed.

Good thing that not all monsters in the dark are pushovers, or that they won't show their fangs should they be forced to come out of hiding. That means for now his delusions are just that delusions, but that also means, that when they are no longer just mere delusions the monsters eventually start falling in place to take him down.

As will the angels bound to protect the world with all of their divine primordial power. That is when the world will truly end, and the apocalypse will begin in earnest.

He may eat monsters, he may make monsters, but that means that he shall have to become a monster.

But… winner takes all when one is on the warpath. And victory is no delusion to the truly unpredictable like Grain the Chuunibyou, the Lord of Delusions that is ready to do just that, become a full fledged monster.

1st NOTE: Do not take this as a light hearted story, its a dark fantasy story so if you can not handle a variety of more sensitive topics I suggest you do not read this story and finding something else to read. The MC is no Hero, antagonist at best.

2nd NOTE: I commisioned the cover art, if the person who made the art sees this I just zoomed in on the art which I commisioned as I thought this segment of the image suited the first book the most.