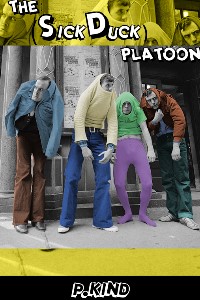 Sam- The main protagonist who always tries to tame the wild flock of the Sick Duck platoon. A guy with a sense of justice and courageous with a hair-trigger temper.

Dirk- The bookworm nerd and an academically genius. He is very shy in front of people and his tiny in size. But no one would want to get at the bad side of Dirk because when he loses his cool, he doesn't give a shit even if it's his teacher or policeman or terrorist or the president of united states itself, he would beat the shit out of you by hook or crook.

The four of the teens were slapped as 'The four Sick Ducks' of Lamington high School. This is the rock N roll pathway of the Sick duck platoon!

Note:- I don't own the cover photo, all credit goes to Monty Python comedy group.