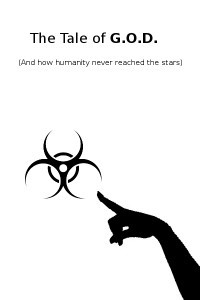 This is the Tale of G.O.D.   (And how Humanity never reached the Stars)

Antioch is a sheltered being and knows little about the world. Although he harbours his own secrets, he doesn't comprehend the scale of the adventure he is about to embark on. Being locked up in a research station, he is content with his fate, but when he starts receiving strange messages, he suspects that not everything is well in his little world.

When it's abruptly decided that the project has to be ended, Antioch is faced with the large world outside his prison.

He won't like what he finds... and there are powers at play who would love to put the escaped subject back into the box.

But as in so many tales, it's hard to close Pandora's Box once it was opened.

Review as of CH 8

And it's something new! It feels like Coeus? with elements of the other ones - a space era with augmented humans, a slightly awkward and a bit crazy male lead and tough female lead. Especially similar are the technology-based abilities of Antioch, and the drones which are basically the IM's from Coeus?

Haha, I wonder if it will follow the usual flipped atchetype of Andur's characters, with the man being a ranged-magic(technology here)-support-crafter, while the woman is a close-combat figher with some auxiliary abilities, maybe around biology or something in the theme.

But it's kinda fresh that the male MC is kinda soft at the beginning, and has somewhat of an aversion to killing, unlike all the incarnations of Ascathon.

Can't wait to see how the story unfolds, and how it concludes.

Is Antioch another incarnation of Ascathon? Is it a very early life, or maybe it's after Dedessia? Or is it another soul altogether? Can't wait to find out

I've read through all of Andur's fictions since I was recommended him about three months ago. While it's always nice to read something that is completed, the most impressive aspect of his stories, in general, is the vastly different settings he comes up with. This one is no exception.

Review as of chapter 40. While there is a lot we as readers don't know about the setting, I also know more than enough to be fascinated by this original (at least to me) sci-fi setting. Revealing too much about it in this review would be spoiling it for anyone interested in checking it out.

Puting aside the setting for a moment, I find the story itself very satisfying to read. Having read all of Andur's earlier fictions, I have an inkling where the story will lead, but that's not a mark against the story. Quite the opposite: I like where (I think) the story is heading. There is still plenty of room to surprise me, though.

As always, the interaction between the characters is one of the highlights in Andur's story. The characters themselves are interesting, but its the way they interact with each other that really make them shine. This is not just limited to dialogue. The sexual interactions deserve a special mention here: they are quite enjoyable to read.

As much as I'd like to give this top score, I think some of Andur's earlier works is ever so slightly better. If I gave this one a five, what would I give them? Though we're comparing some of the very best novels on this site against each other here. This is not bad by any definition of the word. And the story is still not done: it could very well climb up to a full five stars by the time it is done.

Lastly, I'd like to point out something I've noticed across several stories. Andur seems to have quite the fascination with devils/demons, especially when it comes to sexy succubus-like female bodies. I'm not disagreeing, though, quite the opposite.

Wonder how can this author pump out chapters like nothing.

As I said, same as always, it's getting boring, at least the AI is interesting this time so there's one interesting new character...

Can't wait to see where this new chapter takes us. Seriously wish I could get all your work in audiable. Anyway thanks and seriously food for thought I'd buy ........................ The rest of for the word count you can ignore from here on out.

So What if It's The Same?

Another great story by Andur. Don't mind all the reviews and people that complain and give scores based on the author. Reviews are meant to review the story, not the author.

OMG OMG OMG Andur is back at it again

by Grandaddy Thursday, November 9, 2017 8:37:59 PM
Guys. Ive been reading all of Andurs works before i even found Royal road. I have never been dissapointed and once again my standards have been met. Please never stop writing senpai.
Report

More of the same, all thats diffrent is the setting. Same plot, same story, same decent writing. If you enjoyed past works from this author you'll probably enjoy this book. If your looking for something new, this isn't it.

Love the new plot line great way to branch out

8 Chapters in and I have to say I'm on the edge of my seat waiting for more keep up the good work man, you have my vote for top author of the year on RR

Seriously though, the first chapter is pretty dang hooking.

Can't wait for this to make the front page of favorites again so I can find it easier.