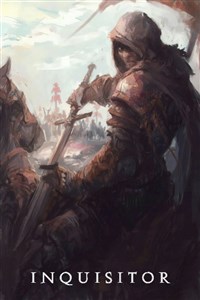 Remove
Original HIATUS Action Adventure Drama Fantasy Magic Male Lead Secret Identity Supernatural
Warning This fiction contains:
Troley, a young and eager boy, lived a mundane life as a farmhand, working year after year in the fields growing the same crops in order to survive. Life was simple but boring.
That was until a band of exhausted knights came charging in through the village with a horrible decree. The King was dead, murdered on the same night the country had held a celebration for what was to be newfound peace with a neighboring nation.

With the death of the King, a now dangerous and potentially hostile country marches on their borders. As if the threat of war wasn't enough, a plot for the throne occurs. All the while, an unfound assassin is hunted down, and Troley, believing that he could make a difference in the war effort, sets off with an unsuspecting ally.

Join Troley as he learns of the many dangers of the world. During his journey, he'll discover some of the greatest treasures hidden throughout the land while also uncovering a terrifying plot along the way.

I have taken it upon myself to accept the pledge. I shall complete this story even if it means my own sanity. May God have mercy on my soul. Also yes, I may have rewritten this story, the pledge still stands.

Hi, I chanced across your story while surfing through the forum and I've decided to answer your clarion call for reviews!

To be honest, what got me hooked on your story initially was your story cover page, which looks extremely professional while giving a good general idea on what your story would be like. Thus, armed with a good first impression, I decided to give your story a read.

I have no qualms with your style and the storyline thus far; it's progressing at a rather acceptable pace with ample room provided for character development,

especially the relationship between the mercenary trio. Too bad Davist and Joul had to go at the end but it is in line with the flow of your story so I won't question your decisions (who am I to question them in the 1st place)

It appears that Edmund is going to be your main character, yet you only introduced him in Chapter 6. This is a very interesting plot device and by portraying his psychological struggles on top of his mysterious powers, I've to commend you for generating a lot of interest in Edmund and in the future development of your story.

If I may suggest, I recommend that you slowly introduce bits and pieces of information relating to Edmund's background in order to keep us readers in suspense. Edmund's mysterious feel is very enticing after all.

My only issue with your story is grammar. Yes, I understand your frequent use of slang in dialogue is to demonstrate the differences in socioeconomic background between your characters i.e. a noble would speak with more eloquent, proper English unlike your typical country bumpkin who is more likely to speak with a strong country accent and slang. (I don't understand the use of "'ere" in some instances though, but maybe it's just me hahahaha)

However, while there is room for the use of slang to display such differences, there are still some rules of grammar that have to be followed. One recurring mistake I notice in your chapters so far is the lack of capital letters for the first word in your dialogue e.g. “fine, fine. Sorry mister Davist, you heard him.”

Nonetheless, the flow of your story isn't hindered, thus, with a little proofreading I believe that your story is still an enjoyable read! Can't wait to see your future developments! Keep up the good work!

The writing style is on a good way and doesn’t break the story in any way. However, there are several things that could be improved.
First, the tenses need to be more consistent. The story switches from past tenses to present tenses occasionally, although it seems rather unintended. The Past Perfect Simple tense is overused at times and there are instances where it is completely unnecessary. I’ll give a little example from the first chapter:

It makes the sentences more clunky than it needs to be. A Simple Past is enough.

And as a last comment: If you write a novel, don’t use words as sound effects. It’s lazy writing. Instead try to describe sounds and the feeling they create within a character. It helps the reader to understand the situation and will make the characters wore relatable (more on that later)

The story is interesting, but rather confusing in the beginning. It gets better in the later chapters, but the first chapters could put off some readers. The problem is the lack of clearly defined protagonists a reader could latch on.

Sure, the travel of Davist and the two boys is kind of interesting, but in the end rather inconsequential to the plot. It introduces only two characters, who are relevant to the plot, but it takes up six chapters. Those could be easily trimmed into two chapters without losing anything.

Another problem is the lack of a story goal. Where does this story wants to go? What is this story about? There is barely an indication and that leaves the reader confused. I do understand that the story is meant to be mysterious, but that doesn’t mean you can’t give the reader some hints about what this story is about. The easiest way to do that is to give your characters more focus. More about that in the character section.

There are some minor errors to be found, but by no means critical problems. A deep check on the first chapter revealed little to be criticized. There were the occasional “It’s” versus “Its” errors, but it happens to everyone sometimes and a simple spelling check in word (or similar) won’t always show those errors.

The characters suffer from the same issues as the story as a whole. They are by no means bad, but not really relatable. Revenge is used as a motivator for two of the characters, which is totally fine as a lot of stories do that, but there is a reason it works only for one of the two.

Despite the criticism about the unnecessary length of the first six chapters, at least they helped to establish a relationship between Troley and his two companions. It gives Troley’s wish of revenge more credibility later on. Edmund, however, just pops out of nowhere, is given a backstory in flashbacks and then the reader is supposed to care for him immediately? It’s hard to relate to him in any way and that’s kind of sad, since he seems interesting otherwise.

The characters are well-written in an overall sense and the two main characters (as of chapter 17) will give an interesting duo.

The story is good, even if it’s not perfect. There may be things to improve, but the author shows potential as his craftsmanship is good enough. Your story suffers slightly from the lack of structure in the story-building, but I’m sure that could be improved.

For potential readers, I would suggest to give the story a try as the story gets better with each chapter. Don’t let yourself be stopped from the first chapters, because you could miss a good story in the long run otherwise.