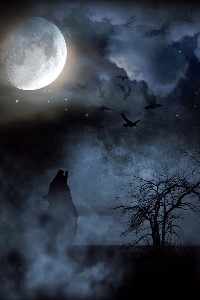 For the next several long minutes, Stone stood calmly outside the cavern entrance and nodded his head up and down foolishly to the rhythm of the wind in the trees, before Elissa came half-skipping out with a small bundle wrapped up in one hand, and the roasted rabbit on its skewer in the other. Giggling lightly to herself, Elissa held out the skewer towards stone and asked, “Is it going to rain today?”

“No rain today,” Stone assured her, never once looking up at the sky. His eyes were glued firmly staring at Elissa and the cloth bundle in her hand.

“Then eat up,” Elissa laughed, merrily, shoving the skewed rabbit up towards Stone’s face.

Frowning slightly, Stone took the skewer and then sighed deeply, lowering his head to look down at his toes. “’Lissa leaving?” The sad way his voice dragged out the words made them only sound about half like a question, and half like a dreaded, world-ending fact that was finally coming to pass.

“I am,” Elissa nodded, swaying happily from side to side. “I told you I was going to have to leave once my service was up,” she reminded Stone, gently. “I’ve got to let my family know where I am, and that I’m safe. They’ve got to be worried about me, me just disappearing from the city without any guards or anything, you know.”

“Stone understand,” Stone nodded slowly, hesitantly lifting the hand without the skewer in it, to give Elissa a feeble thumb’s up. Ponderously, as if the weight of the world was on his shoulders, Stone turned his back to Elissa and stared out gloomily into the forest.

“Farewell,” was the single, remorse-laden word Stone uttered, before stubbornly hiding his face behind the skewed rabbit, as he single-mindedly began to chew and eat the tasteless bunny.

“Farewell?” Elissa half laughed, planting both hands firmly on each side of Stone’s ass cheeks, and trying to push. “Don’t think you’re getting off that easy, mister,” she assured Stone, having about as much luck pushing him as she’d have trying to push one of the massive thousand year old trees nearby.

“WAAAHH!” Stone’s deep yell echoed throughout the forest, sending animals scurrying for cover and making whole flocks of birds take to the sky as he jumped forward nearly three man lengths, before turning and glaring as he reached around and rubbed his back several times.

Blinking, as she suddenly found herself down on the ground from where she fell once Stone just suddenly lurched forward and she no longer had him to support her weight as she leaned on him, Elissa couldn’t help but laugh merrily at the indignant, pouty glare which Stone was tossing her way.

“Tickled,” Stone told her moodily, causing Elissa to giggle lightly as she slowly worked herself back to her feet, as he still rubbed his lower back, attempting to wipe the spittle off it.

“As I was saying,” Elissa smirked, innocently changing the subject, “you’re not getting off that easy. Yeeessss,” she stressed, “I might be going home, but you’re going with me.” Placing her hands on her hips, Elissa glared over at Stone with her most serious expression; hoping that she wouldn’t burst out laughing at any moment, looking at the dazed and confused look on his face.

“Stone go?” Eyebrows arched up almost to the point that they made a “V” on his forehead, Stone blinked slowly several times and rubbed his head in utter puzzlement.

“Yes,” Elissa told him, the corner of her mouth twitching up somewhat, despite her best efforts to maintain a completely serious expression. “My duty’s over,” she told Stone, half smirking, “but yours isn’t. You accepted me from the priests and you need to return me to them safely now that my service is done.”

“You are going to do your duty, are you?” Elissa asked, innocently batting her eyelashes up at Stone. “I don’t even know the way back from here, you know,” she added meekly, slowly pooching out her lower lip, where it trembled ever so slightly.

“Why…,” Elissa half simpered, then quickly turned her back to Stone, unable to get out whatever else she was going to say. Reaching up, she quickly buried her head in her hands and bit her fingers hard, to hold back the laughter that was threatening to bubble up out of her.

“STONE GO!” Letting out a bellow that boomed like thunder, Stone firmly slammed his fist thunderously into his chest in a sign of commitment.

“WAAHHH!” Half screaming at the suddenly ear-deafening shout right behind her, it was Elissa’s turn this time to leap forward. Before her mind even registered what her feet was doing, she was already halfway to the campfire inside the cavern, before she stopped herself.

“Damn you Stone! You scared the pee out of me!” Spinning on her heels, Elissa first shook her fist angrily up and down at Stone, then slowly stopped and stared.

Glaring determinedly, Stone was tugging at what, at first, appeared to be a massive stone staff. out of the forest floor. As he tugged and triumphantly lifted it above his head however, Elissa’s eyes bulged as he held up what appeared to be the largest hammer she’d ever seen in her life, casually in one hand.

With a handle as big around as a normal man’s wrists, and as long as Stone was tall, it alone would make a quarterstaff of massive proportions, which would frighten most foes into thinking twice about going to battle – but the handle wasn’t the part Elissa couldn’t take her eyes off of. Attached to the end of the staff’s handle was a massive chunk of blood red iron, larger than any smith’s anvil which Elissa had ever seen. And, as if that still wasn’t intimidating enough, large spikes as large as a man’s fingers were attached to the end of the blood iron, jagging outwards in all directions, like a set of bloodied teeth just praying to bite someone with all their might.

“STONE DO DUTY!!” Bellowing out again, Stone shook the mighty deathhammer – Elissa couldn’t bring herself to think of it as just a puny warhammer – with one hand, before turning and slamming it into a nearby tree with a blur of force that echoed like thunder and obliterated the tree’s trunk into thousands of toothpicks. As the top of the tree fell slowly – surreally – to the ground, Stone turned and then pumped the mighty deathhammer into the air once more, before nodding to Elissa as if nothing at all unusual had just happened.

“Stone go,” he assured her, calmly. “’Lissa safe,” Stone grinned, before sitting the massive hammer down spike-first into the ground, and then slowly giving Elissa a thumb’s up. “Stone give priest ‘Lissa. Do duty.”

Not having any idea what to say, Elissa just nodded slightly and feebly returned the thumb up.