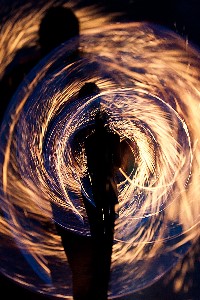 Britney turned the car keys in silence. She had dropped them into the mud by accident and dug them out with a lot of colorful swearing. Her two passengers had pretended like nothing happened while carefully examining everything but her face. It was not exactly an uncommon reaction.

She had taken up swearing during her late teen years as a weapon against her mother. It had worked; she had been quite shocked at first. But then her mother had grown a thicker skin and kept up the verbal abuse and nagging. Like any other angsty teenager, Britney had sought out stronger, more colorful swearing, in an attempt to win the verbal arms race. Eventually, she moved out, and the constant frictions with her mother happened less frequently. But the damage to Britney's vocabulary was already done: She could not help but bring out the swearing whenever she was angry or frustrated.

Only in the presence of children was she somehow capable of reigning herself in. Other's children, at least. Her own had grown used to it. Not exactly something she was proud of.

She wasn't actually angry at children very often. Quite the opposite, she was much more lenient and willing to give them the benefit of the doubt. Which was good, considering she made a living off renting out stable space to horse enthusiasts like herself. Most of them were in middle or high school, though the clientele also included some adults. Only one man, though. There were occasionally younger boys who showed interest, but they always gave up due to peer pressure.

As for why her children had to live with her foul mouth: While they rarely ticked her off badly, her husband most certainly did. She wasn't interested in divorce or anything: Unlike Caroline, she believed fights were a necessary part of married life.

Her best friend, on the other hand, believed in a 'harmonic relationship', and avoided fights like the plague. This commitment to glossing over any disagreements had eventually backfired and torn their marriage apart. As far as Britney was concerned, this was the best possible outcome she could have hoped for, given the circumstances. She had seen how deeply unhappy Caroline had been before it ended.

She drove in silence, a little slower than usual. No need to find out exactly how slippery the road was because of the rain.

“Can I use this opportunity to offer an apology?” Tina spoke up from the back seat. Britney eyed her in the mirror. What did she have to apologize for?

Britney smiled slightly amused. “Well, I guess it’s better late than never, but I can honestly say I haven’t actually thought much about it since then,” she revealed. “It was immature, but so was pretty much everything boys at that age did.”

“As if girls can’t be immature,” Caroline muttered from the passenger seat. Britney decided to pretend she hadn’t heard that.

“If I am to be honest, you were not entirely wrong, either,” she revealed to her back passenger. “Horse meat is pretty tasty in sausage. Not my personal favorite, but I can see the appeal.”

She looked towards Caroline. “Why the surprised face? Isn’t it nice that horses can be useful even when they are put down? Would you rather just throw away all the meat?”

Her friend kept up the appalled look for a few seconds extra. She finally managed to regain control over her mouth. “I never imagined that we’d have such a difference of opinion about horses. For you, they are animals: lovable and useful, but still only animals. I could never eat my horses. They are my friends.”

She sent Britney a look of pity. “I guess the difference is that they can talk to me, and not you.”

Britney felt her ire rise again. She did not like being pitied, nor getting constantly reminded of her lack of magic.

“Forgive me for interrupting, but I have some questions,” Tina interjected from the backseat before Britney’s anger could really fester, “Where are we headed, and who are we meeting?”

“This month’s reunion is at Camille’s place,” Caroline answered, all too eager to change the topic. “Remember her? She was in a different class during primary school. Light blond, lots of curly hair, freckles. Ring any bells?”

“Sunshine? How could I forget her?” Tina replied, clearly happy for the chance to meet her again.

“Yeah, between her hair and her smile, she always reminded me of the sun itself. I called her Sunshine during high school.”

Britney and Caroline had remained classmates in high school. Several others had chosen different high schools. Britney was not aware that Camille and Martin had wound up together.

Tina went on to explain how Camille really wanted to become a doctor, but lacked a head for mathematics. Martin has sort of been her private tutor. Not that he got paid anything, he just helped her with some of her homework as best he could.

“Such a hard-working and caring girl,” she said admiringly, “Precisely the type of qualities you'd want in a doctor.”

"Sounds like someone was in love," Britney said jokingly.

"What?" Both of the women blurted out.

"She was smart, friendly, had such a beautiful smile and cheerful laugh..." There was a hint of longing in her voice.

"Well, it's not my place to make fun of it", Britney admitted. "So what happened between you?" Nothing permanent, she added to herself. Camille had not mentioned Martin to her at all at any point.

"I hesitated, mostly", Tina said. Was there a bit of sadness in her voice? "There was a lot of hesitation going on. Procrastination is the story of my life."

"You never confessed to her?" Caroline asked while turning to meet the girl's eyes. Tina just shook her head.

"I regretted it for a while. But then again, there was a lot of girls I never admitted my feelings to."

Britney raised an eyebrow. "You were in love with a lot of girls, eh?"

"Love is a strong word," Tina partially denied, "more like... interested in getting into their pants. Just for your information, teenage boys are constantly high on hormones demanding they reproduce as soon as possible. As a result, a potentially unhealthy amount of time is spent fantasizing about practically every potential candidate available."

Britney found it curious how open she was with all this, and couldn't help but comment on it.

"Don't be surprised if you suddenly find you are the target of male fascination yourself now," Caroline smiled playfully.

"I'd be lying if I said I won't let it bother me," Tina looked slightly bothered, "Then again, I'd guess the boys would be more interested in ... well, prettier girls. Less fat."

"You're not particularly fat," Britney countered, "also, do you honestly think that no one will find you attractive? Would the old Martin never have spared a second glance at the current you?"

Tina appeared to think for a little while. "You're right. Some boys don't bother with the 'perfect' girls because they figure they don't have a chance anyway. Oh, they will fantasize about them, but not seriously focus their efforts on them. Instead, they'll turn towards the 'second-grade material', which probably includes me. Bottom line, I'm not safe at all."

She suddenly shuddered so violently Britney noticed it through the rear mirror. Her voice sounded somewhat creeped out: "I'm so glad we live in a time where consent is required before someone makes any inappropriate moves."

"It's not inappropriate if someone is consenting," Caroline pointed out, "But as a member of the fairer sex, there are some points you should know... “

She explained how some boys could be less than polite if they thought a girl was leading them on and then rejected them afterward. Also how it generally was a good idea to stay together with other girls if she wanted to avoid undesirable attention.

“I'll keep it in mind’, she nodded, “though I am certainly not planning on leading anyone on, at least not until I have a semblance of control over my feelings.”

There was another pause, this time broken by Tina asking who else was coming today.

Caroline filled her in: “Heidi will be there, at least. Elizabeth has already declined. Kim will come if her son is well enough.”

Tina seemed to need some time to recall each of them in order.

“By the way, didn't you and Heidi have some sort of rivalry going on?” Britney wondered out loud.

“We were both the best in our math class, if that's what you're thinking of”, Tina shared, “She was probably one of the few girls I didn't fantasize about.”

“Why not”, Britney asked, “not pretty enough for you?”

“Absolutely pretty enough”, Tina admitted, “I just didn't think of her that way since we were always competing on the tests.”

“… Wait, does that mean you fantasized about us, too?” Caroline mused.

An embarrassed silence from the back seat pretty much confirmed it.

She noticed Tina squirm. Her eyes were stuck on the floor.

“Didn't you just say it's no longer a part of you?” Britney tried to comfort her. It didn't actually bother her, at least not that long after the fact.

“Apparently not”, was the response from the backseat.