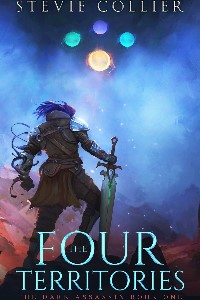 Flames danced around Esh's body, leaving charred black skin that instantly dried and cracked to reveal new skin ready to go through the frying process all over again. All around him were humanoids in the worst pain imaginable. To his left was a group of humanoids being suspended by hooks through their abdomens. The hooks moved on their own, sticking the closest victim. If the hook had any trouble getting through the bone it would simply back up and charge again and again into the previous hole until it forced its way through. When the victim opened his mouth to shriek small hooks flew inside and, Esh imagined, had morbid fun inside the victim's guts.

To his right there was a line of humanoids. All were nude and trembling, waiting for their turn to have their limbs attached to two giant four-legged beasts made of black energy. Without warning, the beasts would snap into a sprint and tear their victim in two. Sometimes the pull was fast and killed the client instantly or they would choose to take their time, step by step, and let the skin rip oh so slowly. It was sort of like tearing a shirt apart, but instead of cloth fringe it was shreds of skin.

In the distance was a sort of giant circular trench with a massive wheel of spikes that continuously rolled in circles on its perpetual path. Massive red circular eyes and a red smile rested on the flat side of the wheel. It had a face, a face that did not turn with the wheel itself but kept its eyes looking below as it crushed the humanoids unlucky enough to have been dropped in. After death, the bodies would reawaken only to be put through the same death over and over again by the spiked wheel. The only sign of relief they would have from this pain was the fresh batch of bodies that were pushed into the trench by three foot black energy goblins. Humanoids pleaded with them, on their knees even, but this just made the leverage better for kicking them into the course of doom.

The only substance that covered this land besides fire was the blood, blood that dried instantly giving off a smell that could easily have been worse than some forms of physical torture.

Esh became aware that all of the torturers were the same, or at least made from the same stuff in the idea that they were all... without light. Just dark dirty clouds that took murky shapes of beasts, goblins, and hooks. These creatures often turned to black gas to move on to another form of fun because they had become bored with what they were currently doing.

But something was wrong. As soon as Esh appeared in their realm, they turned their attention to him and only him. There must have been thousands upon thousands of sinners with their eyes long ago melted by the heat, that were present and ready to be tortured, but it was Esh who the torturers wanted. He could tell by the way they looked at him with their little envious red eyes.

Finally, it was his turn. Hooks pierced each of his shoulders, not a perfect piercing either, but through the shoulder blade. Esh opened his mouth to scream but there was no air in this land, and no air meant no scream. He was lifted into the air, higher and higher. He had the best view of this park of horror. The hooks stopped a moment and Esh could see two other humanoids hoisted from two different parts of the park and they both headed towards him, traveling by hook. Both of these humanoids soared towards him at an insane speed. They hit him, their cauterized bodies sticking to his and leaving a large part of their flesh behind when they swung backwards.

Even without eyeballs and with cracked teeth Esh knew these humanoids. He couldn't recognize them by their appearance but he could feel it. They were his parents.

Before he could even reach out to touch them he was hoisted away. He was now so high that at some point he couldn't even see the land of sin anymore.

His eyes slid open ever so slightly, letting light seep in. One figure was hunched over him and it took his eyes several minutes to adjust. However, he knew instantly by her voice that it was his fake mother. He could feel her tears plop onto his face.

She began to speak far too fast in Reahlic and even others who were fluent in Reahlic probably couldn't have understood her anyways for she had began sobbing and trying to talk at the same time.

He really hoped she wouldn't start touching him for the pain had started to reach his brain now. How was he alive? Hadn't he just been to hell? Had it all just been some crazy nightmare induced by his traumatic experience?

He coughed up blood and it was wiped from his face, but not by the hands of his fake mother but by someone else's. Esh summoned all his strength to turn his head and was shocked to see the trash worker sitting by his side. Before Esh could ask any questions the male raised himself with the same graceful movement Esh had seen earlier and was out the door before two seconds had passed. Esh let his head drift back. What was he doing here?

"Who did this to you?" asked mother in the common language, her speech finally understandable.

He didn't answer, and he didn't think mother expected him to anyways.

There was silence in the room for a few minutes, his fake mother still stood over him crying. He wasn't surprised that there wasn't a doctor in the room treating his wounds. For all he knew, one of the adults that held him down could have been a doctor.

"I think you should know," said mother, "that the elderly male that just left was the one who brought you to me." Her wrinkly face twisted as she stepped back and really took in the mess that Esh was in. It wasn't pretty and it was highly likely he would be dragged by his feet back to the depths of sin land.

Mother left the room and came back with a canister of compressed liquid. Esh shook his head, knowing how precious liquid was this far inland but mother ignored him. She pressed the tip of the canister and spray wet her hands. She carefully let the liquid drip from her hand to his wounds. This seemed to worsen the pain.

She added soap that she had found, an also valuable resource, and cleaned his wounds. He tried to get her to stop, for the pain was too much and he knew she would get into trouble with Korp, the head Master.

She finished the cleaning job and went to the worst part of all. The sewing.

As far as Esh knew she had no skills as a nurse but she did have skills making clothes for the children. His skin would be her fabric.

The procedure took an hour and the pain began to make Esh convulse, his eyes often rolling back into his head. He would pass out and she would wake him up with liquid, stopping completely until he was awake. Oh how he wished she would just finish the job while he was mentally away.

When the job was done she went to clean herself up, leaving Esh alone with his sobs, dull pain, and... anger... Yes, lots of anger. He was tired of the way he was treated and swore to himself, that if he lived, he would get revenge on Mehch.

Revenge would keep him alive.

The door opened but it was not the elderly trash worker or his fake mother who entered, but the handsome Korp. His smile was always ear to ear, teeth larger than normal, and wearing a black tunic. Smoke floated from a very thick fume stick that he kept in the corner of his grinning mouth.

Esh had just left hell and yet the devil had found him.

"Hi dearie," Korp said, shutting the door behind him.