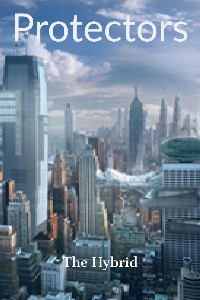 In response to an alien invasion, the United Nations formed the Protectors of Earth Initiative.

The initiative selected 40 of the world’s greatest heroes. These heroes, fought on the frontlines, of the three-year war.

Through courage and bravery, seven heroes rose above the rest. Together they stopped the invasion and brought peace to Earth. From its humble beginnings, the Protectors continued, ushering in a new era of heroes.

However, in a world where heroes shine in the spotlight, villains lurk in the dark. One war has come to a close, but another has begun. A war against villainy and anarchy. A war that will shape the world, in the year 2035, and for generations to come.

From what I can tell the Protectors follows the lives of Protectors and their team for younger inexperienced heroes YP. The story naturally hasn't progressed far due to it having a wide array of characters and multiple POVs combined with currently 9 chapters out, leave it lacking content(for now). There hasn't been any info dumping which I find a pleasant change of pace. Worldbuilding has been done very neatly in my opinion as well.

The style of Protectors feels reminiscent of Brennus due to having multiple POVs coupled with a large cast, this style suits most superhero stories well.

I'm giving the story a score of 4.5/5 since it is fleshing out to be a rather large universe with solid foundations. Normally I would give it a 4 but since I like good superhero stories I bumbed it up to 4.5

While I can't say the grammar has been perfect for sure I didn't find any obvious mistakes that a non-native speaker would spot or find disruptive. 5/5

As for the character score this one is a bit iffy and might change after the story progresses. There are some internal strains within the superhero families but at this point there hasn't been enough focus no the inviduals to say for sure. But I can guarantee that the characters aren't some paper cutoffs so that's a plus at least. Might change for the better might change for the worse, but for now 4/5

Overall it would be a solid 4/5 however my personal enjoyment and the author's fast releases raises the score a bit into a good 4.5