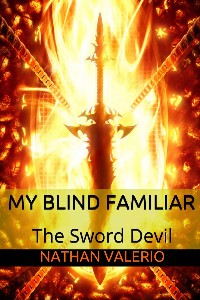 Familiar, a magical creature of any kind that a mage channels mana through to perform magic or tasks. Familiars are all different and each mage can have only 1 and it can only be summoned in Magic Academy due to the preparation for this being in these locations.
The age that these students obtain this is when they start their second year in the magic academy. The first year was purely to teach the students how to gather mana and improve their capacity as well as to weed out those without talent for gathering mana. The entire year teaches the students breathing techniques, meditation and teaches the basis of how magic works.

Our story starts with a young man that summons the most uncommon Demon, the imp or so called the Ash Golem.

Hi ppl, new and very advanced story as well as one i will publish. I won't release many chapters of this one so it is more a teaser.

Fun Idea but so many holes

I feel nearly the same way about My Blind Familiar as I do about Sword Art Online: the initial idea is good, it has its pretty moments, and if your turn your brain off, it can be a fun ride. The writing is amateurish, with awkward sentences and stilted pace. Keeping my mind on just enough to figure out what all the run on sentences said was enough to glide me through volume 1 and into volume 2. I didn't see why so many people were upset with the familiar being female, or with her throwing herself at Xero. Akamatsu Ken was the first manga author I really got familiar with, so I've always been pretty easy on romantic comedy and harem stories as long as the characters were at least a little believable. The childhood friend and bully-turned-rescued-damsel alongside the dedicated familiar wouldn't win any waifu awards, but I've definitely seen worse executions of the harem.

Unfortunately, the "rape as character development", well, development to the story, really pulled me out of things, first because rape and human trafficking are a minor trigger of my anxiety, and second because it just came out of fucken left field. With that sitting on the back of my mind, it got a lot harder to tune out all the holes in the story and how flat the characters felt. I continue to find it more and more difficult to ignore how unorganic and awkward every dialogue sounds, and characters are becoming harder to distinguish as they seem to lose whatever distinctions I believed they had before.

I'll probably keep reading, because evolving monsters seems to hit right in my strike zone for junk fiction, but I can't say I'd ever recommend this story, and I will never be taking it as a serious piece of literature.

The mc is named Xero, that itself is a sin as it seems like the author was trying to replicate the "Zero" anime, a weak familar that grows super op and has some weird super power.I like that the author put a lot of content but i'm not willing to read too much of this.

Would not recommend to a friend

*This review contains spoilers up to chapter 14*

I am so sad right now. I made it through 14 chapters of god awful grammar, poor or completely incorrect word choices, sub-par character development, plot holes, and a whole host of other things, because I truly enjoyed the premise of a demon made of ash becoming stronger as it fought alongside a summoner who was learning as well. I will always have a soft spot for stories where the MC goes to an academy to learn and become strong. But you threw that all away when you decided to turn that demon into a piece of fanservice, complete with the ~ marking behind her words and a penchant for being overly touchy and attached to her 11 year old summoner. This is so disappointing, and I have no idea why you did it. It would have been entirely possible to use the same theme of a sword wielding demon without having to sink to these levels. In fact, that would have probably been enjoyable. As it is now, it's more like a poorly translated doujin that never actually gets past ecchi, and merely leaves the reader dissatisfied.

Good start but the Genre inversion was too much

As for the grammar, I am assuming that the writer's native language is not English and an editor/proofreader would help a bit. The syntax is simple so its not that hard to lose the original meaning.

The only good aspect of the novel is the background power politics and the world buliding alongside the power system. I enjoy stories like this and am a patient person but, the tone shift from dark to lighthearted is completely unexpected and losing readers over that is a high possibility. I recommend a rewrite of the first chapters to include some foreshadowing and to change the tone into something more fitting.

Wow I'm very disappointed in the way this turned out. Went from an 8 to a 1 in one chapter. I get sick of wish fulfillment story's that I got literally angry when ash turned out to be a girl. I guess I'll be dropping this due to the hatred I have for slave girls that want to do the mc.

Great until it turned into another clingy girl story

I was actually enjoying it before the ASH DEMON became a clingy loli.

Never in my life have I read a novel that went from a solid 6 to a putrid 2 within a single chapter, the grammar and word choice is god awful, thats alright, the characters we are introduced to seem to have been copied and pasted from top 10 most common character archetypes list, that's fine, one of the central flaws of the familiar is resolved and also it has quadrupled it's power before the 15th chapter, that's okay, wait, the BLIND ASH IMP DEMON is actually a clingy loli girlfriend that just so happens to be a demon, that's cool. Oh wait, it isn't. I can say with full honesty that you should not read or support this trash. Spend your time and money supporting something that is actually worth it.

As bland as it gets

The concept is really interesting but facefalls into a brick wall on everything else.

The style and grammar is bad but not unreadable. Character is were it shits itself.

It starts by introducing  its world and people in it but except for its interesting idea it is what you would expect from any fantasy novel. The world building is never fun or interesting if its from prespective of an cardboard box. Yes characters are just cardboard boxes. They are as one dimentional one can be and you can't even have any reason to root for them.

MC is the worst of them all. A child with nothing to like about and gets everything handed to him while feeling miserable about himself. Misery doesn't build sympathy if noone likes your MC . You need to have good characters to have a good novel but this one does not and everyone acting like a twat doesn't help it.

In the end its a very interesting premise but has a very bad writer.

I loved this book. The concept of familiars as an integral part of the magic system rather then just an extra that's added on makes for a fresh take on a typical sword and sorcery world. Having read the chapters on this site as well as purchased the e-book I have to say that the promise seen in the early chapters doesn't dissapoint.

As for the cons for this series their are quite a few typos and one word replacing another. At certain points the book switches between tenses in an akward manner. Other then that I feel like there needs to be a bit more focus on Xero's training.

All in all an excellent beginning. I read the book straight through twice in a row.