Shout Out of the Week! 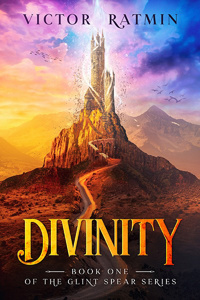 The world of Luminos stands ready. Will Alphonse and Maki become the heroes Luminos deserves, or two more corpses at the base of the Glint Spear?

The reply from Mycroft Ravenport, Duke of Norfolk, came in the form of an invitation held in the beak of an oversized Tower Raven.
"CAW—!" What may or may not be the entity called "Mori" that had befriended Dede dropped off the letter a week later while Gwen and Gracie made their rounds with Magister Brown.
Gracie's progress had been admirable, and after a few days, Strun no longer instantly drew a host of Freshmen seeking to hear the stories of Shalkar first-hand. The rat and her duck, as well, had hit it off without a hitch, forming the unusual silhouette of sorceress, duck and rat strolling on the lawn of Emmanuels, connected by an intangible, mystical bond only she could comprehend.
"The crest of the Ravenport family." Gracie recognised the embossed Coat of Arms of demi-Lion in gules and tri-point argent resting on Gwen's palm. "You have business with the Duke?"
"Literally." Gwen studied the elaborate heraldry, wondering what hers should look like if she received a peerage—maybe she should have a foreground of Kirin in Azure, with Cali in sable, over a shield of obsidian and lightning, with a dog-headed crown for the isle.
"To the Esteemed Magus Gwen Song of Peterhouse," The invitation's cover was floridly inscribed in gold ink.
She broke the seal with a push of her thumb and was surprised when the wax melted away at her touch. The invitation inside, however, made her think twice.
"To the lauded Magus Gwen Song
We cordially invite you to our house to discuss proposals pertaining to the Isle of Dogs. The family has heard much about your exploits, and we are greatly looking forward to meeting you in person. If you may accommodate afternoon tea tomorrow, we shall be expecting your presence.
Yours sincerely.
C. Ravenport.
"C?" Gwen looked to Gracie. "Who is C? Mycroft's wife?"
"Charlene, from Lucy Cavendish," Gracie answered at once. "She's now Lord Ravenport's youngest after his son passed away."
Edgar!—or Edmund, or whatever he called himself. Gwen frowned almost on reflex. The bastard.
"Remind me, how many kids does he have?"
"Lord Ravenport's oldest child is Quinn, from King's College." Gracie appeared to know the famous family well enough to rattle off the names without pause. "Oh, don't look at me like that. I've never spoken to them, but Quinn was famous for participating in Cambridge's winning IIUC team during his third year, and Charlene recently graduated Summa cumme Laude from Cavendish. Her speech on the greater inclusion of NoMs in upper-tier sorcerous education caused quite a stir within the faculties. Many are questioning whether her view represented Lord Ravenport's stance or if she's striking a different tune to bolster her career."
"Quinn, Lucy—" Gwen had no desire even to say the last name.
"Quinn, Charlene and Edmund," Gracie said the E-word. "Word goes that Edmund died after he went out on a rebellious streak on his own, even had associations with certain unmentionables. As a result, there wasn't much ceremony over the young man's passing. That said, he wasn't nearly as talented as his siblings. I think he went to King's, but I've never heard anyone speak of him."
The idea that Edmund, villain extraordinary, could have a life of his own had never occurred to Gwen, and now she suddenly felt strangely depressed.
But then again, it wasn't as though she murdered Edmund or that he had not deserved his fate.
Banishing the unhappy thought, she pocketed the invitation.
"Decorum indicates a prompt declaration of your attendance," Gracie reminded her. "The invitation is Enchanted. Merely speak your reply and set it loose."
Gwen whistled, her mind alive with fantastic visions from Pottermore.
"I'll be there tomorrow," she informed the bird.
"CAW!" The raven took to the skies with a caw and a flutter.
"I guess it's too much to buzz my Message device," Gwen watched the bird become a speck upon the blue-grey horizon.
"Of course." Gracie rolled her eyes. "You're a business leader and a Magus, and this is the household of the Lord Marshall, Gwen. You're not meeting for coffee after exercising your Familiars at the arena! They're receiving you at the Chelsea Estate as well, imply it's a private affair. How exciting, Gwen! Afternoon tea at the Ravenport's!"
Gwen nodded, then withdrew her Message Device and punched it to summon Dominic Lorenzo. "Dom, I'll be going tomorrow at noon—yeah—yep—sure. Do you know where that is? It's at the Chelsea compound belonging to House Ravenport. Yes? Well, I don't, so we'll go together maybe?"
She hung up.
Gracie looked scandalised. "Gwen! That was a private invitation! For tea!"
"Right, where were we?" Gwen ignored the warning, then pivoted Gracie to their prior conversation. "Let's keep testing Brown's plans to muster forth a Familiar. Cali's a cutie now, but my god, those early days were pretty sketchy when it came to vitality usage, and lord knows what you're going to summon without my Master personally drawing his Familiar spell."

"Strictly Caliban" From the always catty @Wandysama "Ariel le Cutie" also by @Wandysama"An Islander's Meta-Journey" from young gun @Bartimeus "The Mysteries of Fudan, and Other Rumors From the Metaworld" by @valderag "Strategic Magic" by @kjoatmon "The Strange Life of a Quarter-Elf From Sydney" by @Izetta_Fleur "Rise of a Magi" by quacky @Rhein "The Chronicle of a Null Mage" by Snow AKA @Warior1411You were Warned

For theorycrafting, world building, Dede, and meta-brew Roleplaying! Thank you Wandysama & Boneless Chicken et al for all the vote pics!

Audibles for Vol. I II and III Avilable in a few months' time!