Voting for the novel :: Voting button

Despite the aborted divorce, Walken's wife did not appear nearly as convinced as Angie of Gwen's presumed innocence. Instead, Audrey's reprieve would depend on the delivery of a panacea for Angie.
"I'll arrange it right now." Her future executive officer had wasted no time. "First, tell me all of your current contacts in London..."
True to form, the old snake's knack for dropping names at precisely the right intervals worked wonders. After an hour of interrogating Gwen's numerous overreaches and over-achievements, instances of "Lady Grey", "The Mistress of Cliveden", "Our new Dwarven Allies", and "I would not want to waste Duke Mycroft's time either," peppered the Magister's vernacular.
She needed time to think, and Walken had unconsciously done her a favour by exhausting the afternoon pulling every favour to schedule Sen-sen's ritual as soon as possible. In addition to procuring materials, he would also personally inscribe the Mandala, as well as spend CCs to contract an assistant upper-tier Enchanter.
It was a pleasure, in a way, watching Walken work, even if his care for Angie did leave a bittersweet saltiness in her mouth.
Beside her, Elvia remained shut as a catatonic clam, likewise needing time. Whenever Gwen tapped the healer's shoulders, touched her shins, or called her name, the girl only answered in single syllables.
For Gwen, the lack of response only multiplied her silent distress. Even now, the petals of her lips burned with the heat of a thousand suns; though she tried NOT to think about the sweet kiss planted by her willing Evee, the sensation invariably lingered.
"I'll join you on the Isle of Dogs mid-January," Walken explained, finally exhausting every topic of conversation. "We'll be attending the IIUC ceremony together."
"Will it be in London?"
"The venue depends on the victor. If Oxbridge takes the crown as per usual, then you'll receive your scroll at home. If not, you can choose to go to Cambridge, or exercise a private ceremony at Peterhouse."
"The one in Massachusetts?"
Walken nodded. "I think it should come as no surprise that your friends from Pretoria failed to outperform the previous champions. Did you get a chance to watch the December match?"
"No, not at all. How about you, Evee?"
The Cleric's chrysalis remained impregnable.
".... A shame. Jean-Paul did well. Nothing compared to a certain sorceress' metrics in Shenyang, of course, but he's made a name for himself. The lad from House Hertzog as well has received invitations to engage in post-graduate studies here in England. They both have an interest in you and, though I am overstepping my boundaries, let me say Meister Bekker's influence transcends Factions and borders."
To further distract herself, Gwen recalled the cringe-worthy invitation from Jean-Paul, smothering the smouldering coals stoked by Evee.
"Is Jean-Paul back in London?"
"I doubt it," Walken said. "Its spring right now in Pretoria."
"True." Gwen redirected her thoughts toward the jacarandas and flame trees studding Sydney's southern suburbs. Her advisor was right. Her fellow Void user did profess that he and his Master escaped the winter every year in South Africa. Given time and resources, she too would one day ascend the ranks of migratory globe-trotters.
The two rested their teacups.
"... Miss Song, are you staying for supper?" Angie appeared at the kitchen door. "Mum said you're welcome."
And with that, her hardwon time delay came to an end.
After the teas and ices, the crisis had climaxed. Within her beaten body, the surviving motes of emotional awareness that had outlived Helena and Hai cried out for redress. Whether weal or woe, Elvia's courage deserved an answer.
And for that, they needed privacy.
Luckily, they were in the right town.
On Brighton's foreshore, there was an old observational outpost, an enormous pin-shaped tower that commanded a three-sixty degree view of the township. A simple call from Walken citing a Class VI War Mage's desire was enough to warrant unfettered access to the decommissioned war relic.
And that was why, ten minutes later, with Elvia cradled in her arms, the duo arrived a-hundred-and-sixty meters above sea-level into the curved-glass capsule, overlooking the bayside town of Brighton.

"Kiki!"
"Sen!"
"Shaa-shaa!"
"Ee—EE!"
Elvia had long since learned to observe Gwen by observing her Familiars. Near the ceiling of the semi-doughnut dome of the observatory, Ariel hovered listlessly, agitated by alien emotions it could not process. Below the Kirin, its sibling writhed, an eel on a hotplate, drooling goo like a dying hagfish.
Not far, her Alraune Spirit was in full bloom, feeding off her burgeoning desires, dripping with the scent of lilies. Besides her, Gwen sat as shy as a rain-teased bud, swaying softly in the honeyed light from the bay below.
Elvia circulated a calming surge of Positive Energy to ease her nerves. What should happen next, she knew all too well. In her occasional daydreams, when she dared to have them, she had already imagined every nook and cranny of her friend against her own, perfectly fitted as if devised by nature.
In Blackwattle, mid-adolescence, her delusions had been vague and fuzzy, full of ambiguity and fantasy. Now, as a provisional practitioner of reproductive health and magically-assisted midwifery, no imagination was needed. Though she lacked practical experience, Elvia understood the physiology of pleasure in an academic context. Though best practices varied, she knew what to stoke and coax. Why, with a little help from diagnostic magic, she would take Caliban's best consumption for a run—
And then the delusion ended, and the root of Elvia's slender neck grew flamingo-pink. From the corner of her eye, she spied at her muted friend, wrapped up in deliriums of her own.
A passive Gwen was lovely as well. Elvia loved the way the dying light turned her eyes amber. She loved the elegance of Gwen's neck, the fall of her hair about her shoulders, her pale skin against the dark fabric of her dress.
When would an answer be forthcoming?
Between her abdomen and her diaphragm, two Sen-sens jostled for space. In the chamber of her heart, an effervescent Kiki danced.
Elvia blinked, realising she had been caught in yet another private revelry.
Beside her, sitting pretty, Gwen had never appeared more beautiful, more within reach.
"Gwen…" she reached out.
There was no more patience to waste.
The fruit of the temporal was ripe for the picking.

Chapter Ref ::   Its a very unplesant Pun
Glossary and Magic System Explained
JOIN OUR DISCORD SERVER FOR CATS
Metaworld Wiki made by Readers

Voting for the novel :: Voting button

Volume 1 Amazon (US) the book is in all markets as well.
Volume 1 Paper Back Link (US, Japan and most of Europe)
Google Play, iBook, Kobo, Nook and Playster Link
Please leave a review or just copy / paste your RR reviews!

Discord is now boosted and has Mods!

Hi guys, for the first time, I am going to explain the subtext of the writing here, because this is an incredibly important chapter. The original draft was over 5k words. The final one 3800.

Chapter title = Bride and Groom / but the grooming of course, refers to something much more sinister, often involving an older individual and a younger one.

Then for a long, lingering while, with Brighton's brimming channel shimmering below them, they stayed entwined and interlocked, a pale-skinned glory against a mortal Ledean body, enacting the yolk and white of the one shell. She was breathing through Evee, and Evee through herself, connected by a consciousness older than the oldest of continents.

I often make lots of literary links to famous works. This Chapter is dedicated to W.B Yeats, and this is the subtext.

On the surface, the imagery is very nice. Hugging, embracing, one egg, completion.
Contextually, W.B Yeats, one of the most influential poets in the English language, had a long and unrequited love for Maude Gonne, a childhood companion. When later she married a rival and as a widow, refused to marry him (He was married at the time, with children of his own), he decided to marry her daughter, Iseult. 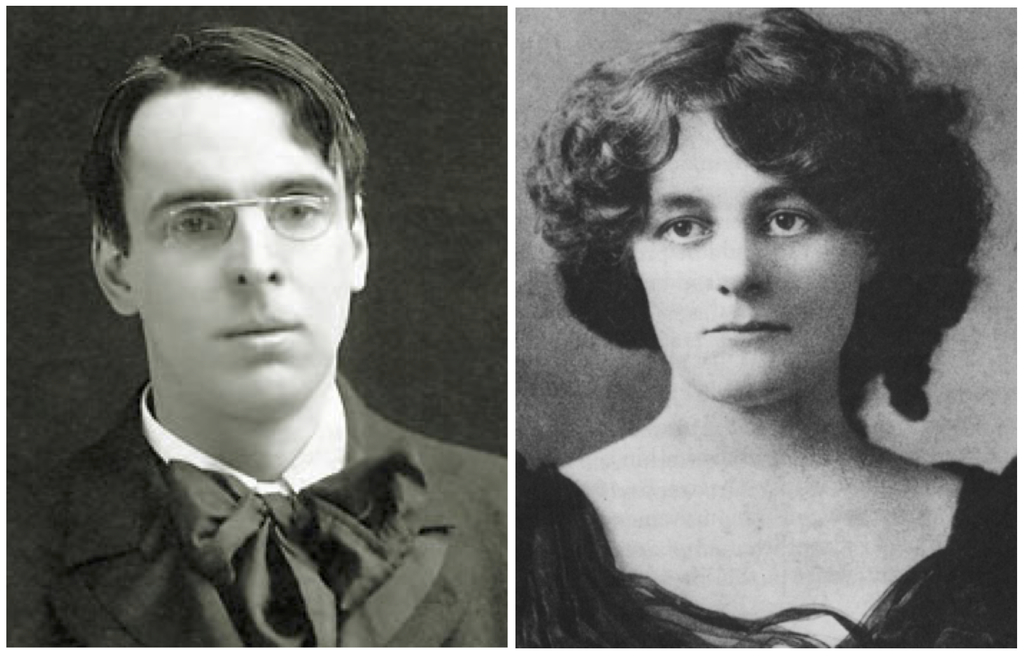 For a very long time, Yeat's physical and emotional longing for Maud, a well as Iseult (see Among School Children), was the source of his poetic inspiration. To which, I referenfe the following work, Leda and the Swan.

A sudden blow: the great wings beating still
Above the staggering girl, her thighs caressed
By the dark webs, her nape caught in his bill,
He holds her helpless breast upon his breast.

How can those terrified vague fingers push
The feathered glory from her loosening thighs?
And how can body, laid in that white rush,
But feel the strange heart beating where it lies?

A shudder in the loins engenders there
The broken wall, the burning roof and tower
And Agamemnon dead.
Being so caught up,
So mastered by the brute blood of the air,
Did she put on his knowledge with his power
Before the indifferent beak could let her drop?

The context here is Zeus raping Leda, but Leda thinks that she is taking something from Zeus, his divinity (or semen, that too). The subtext for my imagery therefore, is also the allusion of rape. Its art, but its also Yeats' fantasy put on paper. As a result of one rape, Troy fell, and chaos reigned in the Greek world. For Gwen, this is her fear.
1. She is the older woman, the all-know, the controller (Zeus)
2. Evee is the younger Leda, having no idea what she's getting into
3. There's a bit of divinity there in the form of Almudj, take that how you will.

Other poets referenced in this chapter are WH Auden, Keats, Robert Grey (Australian Imagist), but none of them groomed their lover's daughters or wrote about fantasy rape, so they don't get a mention.

Vol.1 is now optimally formatted for Kindle. New covers are up.
Vol.2 is still suck in review. I think Amazon is trying to get confirmation that I am the owner.
Hopefully its out in the next few days on all platforms.