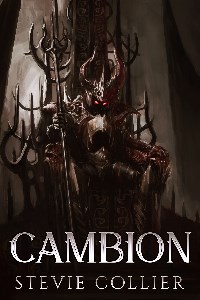 I pulled my face out of the sand, my ears ringing terribly. The first thing I noticed was the fire that had enveloped the training arena stands. The brown muck of the hive had splashed all over the place and apparently was pretty flammable as all the flames had to do was barely lick a piece of the terrible substance and it would instantly catch.

The smell of burning hive was intense and made you feel like you weren’t breathing in any oxygen at all. I stood, or at least, I tried to. I flipped myself over which was a lot harder to do without the use of my legs. When I finally was able to look down, I couldn’t help but let out a scream.

Both of my legs from the knee down were missing.

I started to breathe heavily, my chest rising higher and higher. I was going into shock, I knew it. Between the constant ringing in my head and the anxiety of waiting for massive amounts of pain to come, it wouldn’t be long before the world went dark for me.

But that wasn’t what happened.

My demonic arm tingled a bit as it deflated into my body leaving only the skin. Useless and unmovable. My stomach gurgled as the unholy energy, or whatever it was, traveled through my body. I could feel its presence leak through my organs leaving a chilly trail. It wasn’t long before the cold serpent split itself, now journeying through my veins, and ending up at my two blasted off knees.

Still, there was no pain.

I barely ever felt my horns but now they were starting to prickle and even tickle me as the demon blood within me did its work. I knew what it was trying to do. The demon half of me wanted to preserve my life. Even though I wasn’t doing my job as a cambion, and was helping the good people rather than helping satan’s army, the dark blood still wanted to live.

And slowly, my legs came back to me. Much like blowing up an inverted balloon, the skin of my new legs unraveled from within me as they extended out into the world. The process was slow and even though it was hard to pull my eyes away from the unholy magic, I had to turn and look for Deborah.

I searched the sand but didn’t see her anywhere. I checked again, this time not looking for a body but… pieces of one. I was relieved to find nothing. Only the corpses of the demons I had slain and puddles of burning hive.

Moving my eyes to the stands surrounding the arena, I found her instantly. She was sitting up and from here I could see her head moving.

“Thank the Almighty,” I said under my breath, but as the words left my lips pain shot from my legs and traveled all the way up my body. Apparently, my demon blood didn’t appreciate me appreciating something else besides it, especially since it was the source that was reproducing legs for me.

The pain faded leaving only aches. A sudden convulsion came over my legs which must have been my inner demon letting me know that I now had access to move them. I sat up and looked down at two pale white and hairless limbs. I wiggled my toes and, although the world was burning around me, I smiled.

It was weird at first standing, as though I were walking on two sticks, but it didn’t take long for my brain to accept the new legs. I tried to jog towards Deborah but settled for a fast walk. She looked up at me, her face in a big grimace. Her leg, even from where I was, looked mangled. She wouldn’t be able to walk on her own. I was almost to the stairs that would take me to her when Gauss entered from one of the open hallways.

He spotted us and was able to make it to Deborah at the exact moment I did.

“We need to get out of here,” Gauss said, putting his shoulder underneath one of Deborah’s arms. Seeing that my demonic arm had re-inflated itself with its demon juices, I took the other arm and helped Gauss carry the wounded girl. “Something’s happening. We weren’t prepared for this.”

“What are you talking about?” I asked, trying my best to keep up with his pace. Deborah was groaning, her face twisted in pain.

“This wasn’t the only hive!” he cried, as something big crashed somewhere from within the Refuge.

“But how? I thought we were safe here!”

Gauss looked across Deborah and into my eyes. There was worry in them. “Me too.”

We were close to entering the courtyard and I almost found myself thanking my demon blood for the constant flow of stamina it gave me for without it I doubted I would have been able to cope with my new legs and the weight of a full armored woman. Would the Almighty be upset if I gave thanks to the thing that constantly was saving my life? This life of mine wasn’t getting any easier, if anything, it was getting more and more bizarre. Was I completely sure I wasn’t living in a nightmare?

Gauss shoved his hand into my chest right before we made the last turn that would put us where it all began for me.

Gauss didn’t answer but put his hands on the cobblestone wall. He pulled it back quickly, bits of smoke rising from his now blistering fingers. His face, however, showed no signs of pain. Who was this man? Could he be one of them?

“This way,” he said, backing us up about ten feet. He then pulled out a blue sphere and smashed it hard on the wall. The blue plasma inside washed over the wall making it now possible for us to traverse through it.

Gauss stepped into the wall first and I followed. I caught a glimpse of Deborah’s face. Her eyes were closed and her mouth lulled lazily. She was completely unconscious now, the pain being too much for her. I really hoped it was only the leg that was messed up.

Outside in the courtyard was complete hell and I mean that quite literally. Gauss wasn’t kidding about there being more hives as there were more of them than there were buildings! Hives floated in the air, some were wedged in corners, and I could even see a few mini shit piles connected to the library’s pillars where they were spitting out demons the size of rats.

Humans, orcs, elves, goblins, and dwarves of the Refuge, all fought as best they could against the flying, walking, and crawling monsters. None of us had expected this onslaught and this was apparent by the gory scene that was now entering my eyeballs.

The sight was depressing. I’d never seen anything so horrible in my life and all I wanted to do was curl up in a ball and cry. So many were dead that I could practically smell their bodies from where I stood. The entrance to the courtyard we’d almost walked through had been blocked by a burning wagon which was filled with freshly forged red alchemical spheres. This was the reason why Gauss had stopped us. How had he known? And when would that wagon of spheres go up in flames? There were enough explosives in there to take out the entire city!

The sounds of yelling made me turn my attention straight ahead. I watched as a black armored elf, one I’d seen before in the training grounds, run towards us only to have a pitchfork shoved into his gut by a flying brown demon. The monster’s mouth hung open, screaming as it continuously stuck the pitchfork into the dying elf’s stomach. The wrenching of moving metal was somehow worse than their combined screams.

Chaos was everywhere I looked. A thick black smoke hung over the Refuge as ancient buildings burned down. Women ran screaming for their children only to be wrestled down by demonic grunts who tore their limbs off with ease.

My heart crumbled in my chest when I caught sight of Doctor Varok, at least half of him, hanging out one of the drinking fountains, its water now turned crimson. Who else would these damned things take from me? I wanted to fall to my knees right then and there but I couldn’t! I had to be strong! I had to force the thought of losing my new friends and replace them with that of survival!

The Almighty had a plan! I just knew it. He was here, with us, even in this darkest of moments… but it didn’t feel that way. What prayer could solve this? What could the Almighty possibly do to bring them salvation from an army of darkness?

As if the Almighty had his ear to my mouth, the grand entrance to the Refuge began to jiggle. Someone or… something was coming in.

The radius of the wobbling of the wall grew larger meaning more than one person or thing was entering. I found myself praying hard inside my mind, begging the Almighty for any sign of hope.

A woman appeared through the wall wearing shiny black armor which was in contrast to her blonde long hair that flowed in the wind of destruction. Followed behind her was a squadron of at least thirty men and women, all wearing the armor of the black knights. Her familiar eyes scanned the battleground until they rested on me.