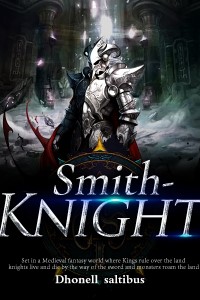 In a world where kings rule over the land, knights live and die by way of the sword and monsters roam the land, sea, and sky. A young blacksmith will have his chance to make a name for himself! Along with the allies he makes on the way, from Humans, Demons, Elves, and more! Will he be able to live through it and gain greatness beyond his hopes and dreams? Find out by reading!

The premise is really interesting, but the execution is very flawed.

Way too many run on sentences, mostly because the author forgot to add a period somehow. Quite a few instances of bad grammar in general, maybe use something like grammarly or word to root out the errors.

Shitty, generic Anime characters, not sure what possessed the author to resort to weeb shit rather than properly fleshing out normal characters. Main character is vaguely strong like some shonen main character, his dad is vaguely mysterious, his sword girlfriend is wierd and without her memories, his sister is a creepy Stalker trope, its all just so predictable and boring. Might change in later chapters but I can't read anymore

Really cringey, not much else to say about it. Reads like it was written by a hyper 14 year old who has never written before in his life, and the little comments the author makes in the middle of the story are the icing on the bad comedy cake. The comedy should come from the story itself, not be shoved in at every opportunity with no regard for pacing, tone, or reader immersion

I don't care how original a concept or a character is, but you have to put in some effort to make whatever you're writing your own, or what's the point? The concept is great, the setup works just fine, none of the characters are so terrible that I can't grow to like them if they're written well enough, but the juvenile humor and uninspired writing drag the story down into the mud. Not a bad first attempt, and pretty good for someone around the author's age (or at least the age I'm assuming he is), but the story itself grates on my nerves

Ps. Sorry about the unstructured review, I made this in a hurry and I've got shit to do

Pps. Keep trying donkishin, despite all my criticism your writing isnt terrible. Just ditch the quirky nonsense and focus on developing the story and characters properly

So far I'm loving the story, and yes while I'm not to far into it the humour and shenanigans are enough to make me think ill be reading this for a while. Only thing I'd suggest would be add a bit of romance to it, as Blake has shown that he is interested in the girls but thats only my suggestion, just don't make him choose one of the girls over the others. I hate harem novels that do that.

Anyway keep up the good work and I love the novel