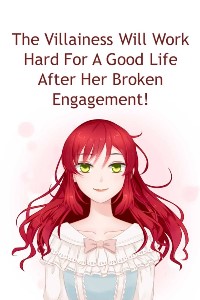 The Villainess Will Work Hard For A Good Life After Her Broken Engagement!

They say that life is full of uncertainties, but not for me – because I have read the light novel series I have been reincarnated into.

The villainess of ‘Resonant Hearts’, Liliana Gracia Remington, was a person as poisonous as her nickname, ‘the Poison Lily of the Capital’. Her miserable life ended when she committed suicide after her fiance, the First Prince, broke their engagement and fell in love with the heroine. The character deserved her ending but that is a big 'no thanks' for me!

To avoid the bad ending, I guess I will have to start by preparing myself for life after my broken engagement!

*Book cover was made with the help of Avatar Factory.

It is technically well written overall, there are a few minor grammar mistakes and the occasional misplaced word or two as is common with all authors before going through it with an editor.

The story has potential, the character still lack depth although the story is still in its infancy so the author will need to build on it as it progresses.  I would suggest the author create a written profile for each major character including behavior, flushed out back story and so on as a reference document. The more involved a character is in the story the more detailed these need to be.

This is a character driven story that is dialog “heavy” and progress at a crawl.

Chapter one through seven are basically the protagonist is at her fiancé’s home, they talk, she falls into a pond, they talk some more, she falls sick, the prince sneaks out to see her, finally something interesting happens while she is asleep, she goes home with a new lease on life. Then she meets her new teachers, has visitors, shows them around, gets gift from the prince and more pointless conversation.

Dialogue is supposed to have a purpose and is used to build towards something while helping to advance the story. Heavy dialog is fine as long as characters are doing interesting actions to accompany it. The current characters feel like they have a case of talking head syndrome with little purpose for their actions other than to chat.

This is a common mistake new and aspiring author’s make. Excessive dialog for the purpose of character development is not an effective way to tell a story. Character development should be primarily accomplished through actions with dialog to support those actions and enhance them.

Notes to the author:

I write this because you have a refreshing take on an existing idea. This story of yours has a lot of potential and it would be a shame if it wasn’t developed further. Do not take this as a negative review but rather feedback to help you progress as an author. It is a tough road and takes persistence and the ability to examine one’s own work critically.

I would suggest you read, “The Iron Teeth: A Goblin's Tale”. It is an extremely well written story on this site and does things very well from dialog to proper pacing and an excellent example of character development.

If you want something more traditional and character focused, I would suggest, “Harry Potter”. The author does an excellent job of establishing her secondary characters very quickly in the first chapter. The book is also a great example of character development and progression.

A good rule of thumb: what is the most interesting thing my characters could be doing right now and am why am I not writing about that?

Overall I look forward to seeing this story begin and you develop as an author. I recommend going back and rewriting the first seven chapters should you take any of this feedback.

Love it!! Can’t wait for more

I found this by chance and I just couldn’t stop reading! I love how the author shows the different perspectives of the characters and also on the details. Personally, I also fine something to like about all the main characters so far and really want to see how their relationships develop in the future. The only minor negative comment I have is with the long paragraphs of the characters talking to themselves with what seems like extra information. Like I mentioned before, it is minor thing and I still love reading every little detail. Thanks author for writing and I can’t wait for the next chapter. 😊