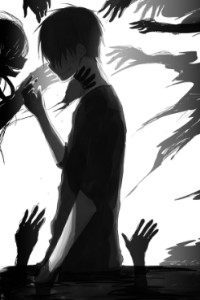 Hello there. Amateur Author here. I had things to do yesterday so I didn't have the time to publish any new chapters. Anyway, please forgive me for any grammar errors or misplaced words on the novel. I am doing this on my own with no editor plus I am an amateur in writing novels. I am very sory if there are inconsistencies and wrong wordings. I will do my best to edit and clean all the chapters so please bear with me. Thank you and happy reading!

The day Belial was taken away

I was busy reading the parchments regarding submitted policies when I heard a ruckus outside my office. What's with all the noise? Is there something wrong? I wondered what was going on. Iam the master of this palace, the King and yet I have no idea what is going on. It was then that a shadow guard appeared to my side and reported.

"My king, Prince Beale was kidnapped! The palace is in a state of turmoil! The kidnapper killed all the shadow guard that is with the Prince and then took the Prince away!" the shadow stated with a cold voice.

"WHAT?! How... how could that be? Where was he taken? Where was Beale taken?!" I faced the shadow and asked him anxiously.

"In Duke LeCrussant's quarters. The duke summoned the Prince to his quarters."

"WHY?! HOW COULD A DUKE SUMMON A PRINCE?! WHETHER FROM THE ROYAL LINEAGE OR NOT, A DUKE IS LOWER THAN A PRINCE! EVEN IF HE IS MY WIFE'S COUSIN, IT DOESN'T MEAN THAT HE CAN UNDERMINE THE ROYAL FAMILY! Wait... Could it be? COULD IT BE THAT HE WAS INVOLVED IN THIS?!" I was becoming enrage with such speculation.

"We are still unsure of his involvement but there are unusual movement in the LeCrussant house for quite sometime now. Although it is not certain, the duke could have a hand on this incident."

"And why would that be?" I was trying to calm down to assess the situation properly.

"Earlier today, the First and Second princes got into an arguement."

"An argument? But Beale doesn't go to where Ignace hangs out. How could that happen?" confused, I directed my question to the shadow.

"No, my King. It was Prince Ignace who purposely went to Prince Beale's resting spot to provoke him. Their meeting erupted into an argument by which Prince Ignace tried to use his status as a first prince. Prince Beale didn't back down and defeated Prince ignace in the battle of words. Enraged, Prince Ignace casted a low-tier spell 'Fireballl' and attack Prince Beale. Surprisingly, Prince Beale countered it with a mid-tier Darkness type spell 'Consume' without chanting. After countering Prince Ignace's spell, Prince Beale seemed irritated and started to release his killing intent. It was such a strong intent that Prince Ignace and his entourage fell into their knees. Even the shadows who were with Prince Beale at that time were almost choked and immobilized."

I stopped the shadow from his report as I was curious about something. "Bloodlust? Prince Beale has bloodlust?"

"Yes, my King. The report I received was stated like this: Prince Beale's bloodlust was like that of a person who have walked the battlefields all his life and survived. Like he had already killed legions by himself. Like he was a living incarnation of death. Never have I experienced such bloodlust. Even Great General Bonaparte doesn't have that kind of bloodlust. It was like experiencing death while still alive."

I was confused and horrified on such a revelation. Unprecedented bloodlust? How can that be?! He is just a boy! I-I need to have conduct an investigation on this matter. This is not something I can just take for granted. I asked the shadow again "Continue your report."

"Yes, my King. After releasing his bloodlust, Prince Beale reminded Prince Ignace that if he is disturbed once again, he will ask for a life-and death duel. After saying that, Prince Beale walked away but only for a few steps. He then turned around once again and revealed a 'chilling' smile and said and I quote: 'And don't call me so casually. Call me "Your Highness" or "Prince Beale" but if you want to call me casually, you can just call me... Belial... Just call me Belial.' then turned once again and left."

"Wait wait..." I hurriedly interrupted the shadow. "Belial? He named himself Belial?"

"Yes, my King. He called himself as such." he stated seriously.

How could this be? This is so bizarre. My little boy releasing an insane amount of bloodlust and now states a different name. Could it be? Is he... a reincarnator? No... It isn't certain yet. I must seek someone's opinion on this. I thought as such. I then turned to the shadow and said "Continue"

"Yes, my King. After the incident, Prince Ignace went to Duke LeCrussant and after a while, the duke sent one of his knights to summon Prince Beale. The Prince went to the duke's quarters and that was the end of the message before we lost contact of the other shadows." he then finished his report.

"I see. Investigate what happened. I trust you can give me a satisfactory report within the forthnight?" I asked the shadow in front of me with a stern voice.

"By your will." and the shadow disappeared.

I need to investigate on this more. I will ask Victoria about this. I straightened myself and yelled. "Guards, summon Duke LeCrussant."

"Yes, Your Majesty." One of the guards replied and immediately went to do as I have instructed.

I hope I am the first person to report to the king. It will give me significant leverage if I am the first to inform him of this matter. I was walking the halls towards the king's study when I saw a guard running towards us. Could it be? The guard stopped in front of me and addressed.

"Yes. I will do as I am commanded." Could it be that he knows already?! But who?! Who could have told him what happened?! I nervously followed the guard towards the king's study.

When we arrive, the guard began to inform our presence with a shout.

"Your Majesty, Duke LeCrussant have arrived."

A voice from the other side of the room answered. "Let him enter."

The guard turned towards me and said "His Majesty would like to see you now. Please enter."

I entered King Hector's study. Filled with books and parchments, one could imagine what is inside those things. Business dealings, contracts, subpenas, arrests, investigation reports, accounting, everything the kingdom deals with are in here or most of them. And soon, if I play my cards right, All of this will belong to me. I walked towards the king and kneeled.

"Rise. Have a sit." the king ushered me to sit. Seems like that was needless worry.

"I would like to make an urgent report, Your Majesty. It involves-" I was cut short by the king's hand when he held his palm in front of me.

He then put down his hand and looked straight at me. "I already know. I am here to ask you of certain things."

Shit! Could he be... No. That's impossible. I put up my most natural face towards him and replied "Yes, Your Majesty. How may I serve you?"

"I will ask you frankly then. Why did you summon Prince Beale to your quarters?" he looked at me with serious eyes.

"I summoned Prince Beale, You Majesty, on behalf of Prince Ignace. To mediate between the two of them so-"

"In what capacity or power did you use in order to summon a prince? You, a duke, and any other duke cannot summon a prince no matter the circumstance. Even if it is to mediate between the two princes, you should have asked my opinion since only I, the king, has the power to summon them. Are you, Duke LeCrussant, trying to undermine my authority?" he asked with a chilling tone.

I'm fucked. He knows everything that happened. "No, Your Majesty. I was just trying to help them. As there uncle, I only wanted to-"

"So, you are now trying to use familial bonds as reason? Then why am I, the father, not informed first? Shouldn't I, the father, be more concerned of the well being of the children before the uncle?" he asks now in a threatening manner.

"N-no, Your Majesty. It only happened because Prince Ignace asked me for help."

"So you are now using Ignace as an excuse. Very well. Everything will be known in time. For now I will ask you, How come Beale was kidnapped in front of you? At your own quarter?" He asked, now releasing bloodlust.

Shit shit shiiiiiiit! How can I get away with this? The plan is still not complete. Fuck! "It was so sudden, Your Majesty. The kidnapper used poison and drugged us. We couldn't do anything about it. We were knocked out!" I exclaimed, trying to make a point.

"And yet all my son's escort who were all covert operatives died while none of your knights died, virtually unharmed. Why is that?" the bloodlust released by the king is already making me feel dizzy.

"Yo-your M-majesty... A-are you su-suspecting m-me?" I tried to talk but the heaviness of the bloodlust released by the king makes one hard to breath.

"That remains to be seen. I am just warning you. If I find just one bit of you being involved in my son's disappearance, you will face the consequences. You may leave." retracting his bloodlust and killing intent, the king returned to his usual cold self.

"This one will excuse himself then, Your Majesty."

I hurriedly left the place. I am still catching my breath and sweat formed on my forehead and back. That was one hell of a surprise. I guess I now know why nobody messes with the Valois family. They are monsters. But fuck... Now I'm screwed. All the plans must be accelerated before Hector could move. But this will not end well and the losses will be heavy... But... What are losses if you can win. I straightened my back and started to walked away.

"I've detected movement from the fallen ones. Something is blocking my view. But there is something..." he stated while having a bad expression on his face.

"What is it? What is kind of occurence that's making you uneasy?" I asked seriously. Phanuel isn't one to talk and act like this if it isn't bad.

"I'm not sure yet... But it feels very familiar... yet very dangerous... He is still weak right now... I just hope we can find him before the fallen ones start to move."

"Can you locate him?"

"I'll try but not right now. My vision is blocked."

"Fine Camael. I'll just do what you suggested."

Bio: Just an ordinary guy with a voracious appetite for novels. I may not be an index for novels but I have read a lot since it is one of my most defining trait: reading. Do give me some pokes if new novels are published or give me any recommendations you have. I will gratefully accept them all!