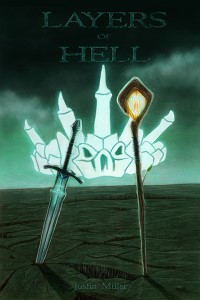 “Lilith!” I called out loudly, watching as she stopped dead in her tracks, slowly turning around to face me. As she saw me running towards her, her expression became one of surprise, her eyes widening and her hand rising to cover her mouth.

However, her expression became more concerned when she saw me getting closer. I wasn’t sure what expression I was making, but I knew it couldn’t have been good. Not after what I saw. What I suspected to be true. “What’s wrong, Grim? Did something happen?” She asked hesitantly.

It took me a few moments to catch my breath, mustering the courage to speak. I had to tell her. Either I was right, and we had to do this together, or I was wrong and none of it would matter anyways. She was the only variable from the game that was different. The final boss that I encountered far too soon. “Something… something is wrong here… I have to tell you.”

I was panting for breath as I spoke, having run far too hard in order to catch her before she disappeared. “What is it, Grim?” I could tell that she wasn’t really understanding me, so I decided to explain from the beginning.

I told her everything. What I was like when I was alive, how confused I was when I suddenly came to Hell… And most importantly of all, I told her about the game, the Layers of Hell. I told her how I thought it was just a coincidence before, or some fever dream.

“What changed your mind?” She asked, an eyebrow raised. I could tell that she was curious, but that question was asked with a mix of amusement and annoyance. Perhaps, she might not have enjoyed learning that I thought she wasn’t real.

“I saw someone… someone I knew. A cancer patient. He shouldn’t be here…”

“Grim… everyone comes here eventually.” Lilith spoke softly, shaking her head. “Everybody dies. It’s only a matter of dying well.”

I couldn’t help but laugh dryly at that. “Well, I was hoping for someone like him to go to Heaven. He’s a good kid.” Lilith’s face cramped up slightly when I mentioned Heaven, but maybe that is to be expected of a demoness.

“And, you said I was supposed to be the final boss? Some uber powerful sorceress rallying gods and devils to attack Earth?” She asked, changing the subject.

“Yeah… I don’t know why that changed… why you were in the cell instead. Normally, there should have just been a random NPC there. I should never have seen you until the final battle.”

“So… maybe things aren’t how they were in that game?” She asked hopefully. “I mean, I’m right here, and I really don’t plan on destroying the Earth.”

I could only shake my head at that. “I don’t know… The first clue that I found wasn’t until floor 251. But… if there is someone in that role, I can’t just do nothing. This all just makes too little sense. Because of that game, I’ve known what every floor was like before we even got to it.”

Lilith nodded her head in agreement. “I’m not saying we do nothing. If it’s getting to the floor, it’s nothing really difficult for us, is it? I mean, we just have to die a whole bunch… But why didn’t you tell me any of this sooner? Or warn me when we were about to get into a dangerous area?” I looked up and saw her looking somewhat accusingly at me. I couldn’t blame her, really. I basically just told her I let her drown to death without warning her on purpose.

“I couldn’t, or, I didn’t think I could. I mean, why would you believe me? I’m just some human that only came to hell recently. What would make you believe me if I told you that there was a giant plot to destroy the living world?” Not to mention that I wasn’t entirely sure myself that any of this was even real.

Lilith’s face softened, and she let out a brief sigh. “You idiot. I’ve seen you fighting in almost inhuman ways since the moment I met you, and you really think I didn’t consider something was strange? Now, granted, I didn’t think it would be at this level of strange, but still. I mean really, who else could possibly turn silk thread into cloth without a loom, using only toothpicks? And, you said this is all from that… what did you call it?”

“Equipment Mastery… it was a skill from the game, one you can learn on the 533rd floor from the ‘Master of all Things’.”

Suddenly, I heard Lilith start laughing, and I looked up to see her holding her stomach with one hand. “Really, he has a title like that? No wonder he’s so far down, he was probably too embarrassed to come up higher.”

“You’re… not mad?” I looked dumbly at her, having expected her to insult me or hit me or do more than just call me an idiot once.

“Huh?” She looked confused at the question. “Oh, I’m mad. I’m not letting you off the hook that easily. But, if what you’re saying is right, there is an adventure to be had, and the end of the world as we know it to prevent, right?” I nodded my head slightly. “Then, what are we waiting for? You’re some expert or something, so I expect you to pull your own weight from now on.”

Lilith stood up after that, smiling to me with one hand extended. I felt my eyes starting to water up again at the trust she showed. I grabbed that hand, grasping it firmly on my own. “Oh, shut off the waterworks already. We have a world to save, don’t we?”

I nodded my head slightly, wiping my eyes. There really was too much that needed to be done. I couldn’t put this off anymore. We were really going to try to overthrow Hell, and to do that I’d need more power than what I had now.

Opening the class selection window, I looked through for a class that could help me get through this. I didn’t look for survivability, because I knew I still had to die hundreds of times before we got where we were going. Even if I used every smuggling route I knew, I couldn’t avoid that. I looked for power, sheer unrivaled power. I’d be fine with being the ultimate glass cannon.

And, that’s when I saw a class I had never encountered before. One that I hadn’t seen mentioned in either the game, or in the Layers of Hell forums. Its requirements were truly obscene for a new class, so it’s unsurprising that nobody knew about it.

This, this was exactly what I needed. A class that perfectly complimented Equipment Mastery, and would let me bring out its full potential. Without a second thought, I chose to become a Living Armory.

I nodded my head slightly, confirming the decision. I felt my body stiffen, my muscles thickening slightly as my stats were increased thanks to choosing a class. As soon as the sensation passed, I opened my status window to see what had changed.

I smiled slightly, seeing the two new skills added to my list, as well as the small buff to my stats. Lilith, seeing the change, had a confused look on her face. “So, since you seem to be the man with all the answers, where are we going?”

“We’re not going anywhere.” I answered, sifting through the information I had on this layer. “This is the eighth layer, the wildlands. We should grab the artifact from this floor before we move on.”

Lilith smiled, seemingly happy with my change in attitude. “And what item is on this floor?”

“The eighth floor is the home of the World Tree. If we can get some amber from the tree, we can use it to craft an item that boosts magic. If we can cut a small branch from the tree, I can make it into a staff for you once we get the right tools. Even its leaves are useful, because they can be consumed to replenish magical energy.”

Lilith’s eyes grew wide as she heard my explanation. “And you’re sure about all of that? There’s really something that amazing here?” Her eyes scanned the horizon, as if looking for the tree in question.

I simply nodded my head. “I’m sure. If my memory serves me, it will be guarded by Fenrir, the demon wolf. As for its location… I’ll need to see a map of this layer to pinpoint where it is in relation to us.”

I really wanted to get my hands on that map, anyways. The World Tree was more than just a key location on this floor, it was one I had personally visited in the game. If I could find it, I should be able to use my own game knowledge to find things in the future.

Lilith grinned brightly at that. “Well, what are we waiting for? Let’s go!” She reached down, grabbing my hand and running back towards town with me in tow. I didn’t even get the chance to show her my new inventory skill, which I knew was going to surprise her.

I could only let out a small smile as we made our way back to town. On the way, I listed out the things we’d need to make this work. “First, we need an axe capable of cutting down wood as strong as iron. The leaves are easy, they can be found on the ground around the tree. For the amber… that one will be tricky. We’ll need a small hammer and a chisel, but one made of strong enough metal that it will break through the bark of the tree and pry out the amber.”

Lilith nodded her head repeatedly, taking in everything I was saying. “How are we going to deal with that Fenrir, though? I mean, he’s bound to be really strong, right?”

“Yeah… honestly, no matter what, I think we’re going to die in that fight. My goal is just to distract it long enough for you to gather what we need. Fenrir is a guardian beast that has been eating fruit from the World Tree longer than anyone can remember. You could say he’s an immortal boss, because as long as the tree exists, he can’t die. That’s also why I don’t want us to go after the fruits, because they are cursed objects that would bind us to the tree.”

That was a mistake I had made earlier on in one of my first playthroughs. Realizing that the fruits were likely the secret to Fenrir’s immortality, I had gathered one while my companions distracted him and ate it. From then on, my character couldn’t die, but I also couldn’t leave an area of five hundred meters around the tree itself. Essentially, I had reached a bad end.

Lilith grimaced when I told her about the story, nodding her head gravely. “Okay, so don’t touch the fruits, got it.” She said as we were just getting back to town, the guard giving us strange looks. He probably wasn’t so used to seeing the same people so many times in one day.