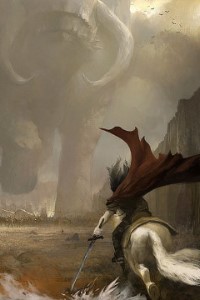 My life as a human knight has begun

The battle against the Demon Lord has been done for several thousand years and yet human never win even a single battle...let alone see the face of the Demon Lord. Thus, an experienced elite foot soldier for Demon Lord has become fed up with those futile efforts for as he gains nothing but a boredom

Sheron Hunr is the name, with reason...has gone to the human side which is to learn about their reason for their defeat. While on his mission, he learns many things about the human that he doesn't know for entire his life. what will happen to Sheron after he lives at human side....?

Autor notes. It's my first time writing a novel and also posting online. I'd appreciate any feedback and comments. The updates will be random. For the beginning, I'm sorry for my bad grammar and I hope you all can spend your time to read my story.

Seems like an interesting premise and I can handle bad grammar and bad spelling, but this is so far off base with grammar I can't read any further.

try to do a little bit of editing and I'd be happy to give it another try, really interesting concept

Poor grammar, makes reading awkward as I am constantly stalling.

Reading this is a chore. This is the opening paragraph.

"Today, a ten thousand of human's army is led by seven holy Knight march to the area called Demon king's realm. I joined them as volunteer soldiers because, in this country, it's iron rule for each family must send men, one or many, who capable bearing arms, to be the volunteer. Although some of those who were fearful to fight against the Demon King's army, as for me, it was a bright opportunity, to avenge against the Spear Warrior called Sealgair, who killed my father 13 years ago."

If you can't see the flaws here then, go ahead and read this work.

Anyway, I am not a good writer, but here is what I think that text should look like.

"Today, ten thousand soldiers of humanity's army led by seven Holy Knights, march to the area called the Demon King's realm. I joined them as a volunteer soldier because, in this country, it's the iron rule for each family to send men, one or many, who are capable of bearing arms, to volunteer themselves(/as soldiers)."

That is all I am going to do as I would have to take creative liberties to make the rest look decent. I don't even think my changes were that great, and many people on here could easily do better. I also skipped ahead to the latest chapter(31) to see if the grammar had gotten better. Well, it hasn't.

I am not trying to be mean, the grammar just isn't good. I didn't really notice any spelling errors, but I also suck at spelling so, yeah.

To the author, I am not saying you should stop writing. If you like writing then don't stop, even if you never go about fixing the grammar. I am just saying that better grammar would make it more enjoyable for the reader.

This is an awesome concept, and a few interesting moments so far, wrapped up in an almost unreadable text.

I seriously want to like this.  I want to be able to windmill slam "five stars must read", but it's just illegible.  You've got good ideas; find yourself an editor to help you share them.  I understand the desire for self improvement, but you can still get better with someone else helping.

I had tried reading this with my uttermost patience but in the end I had to dropped it. First of all I find the premise of the Novel, really great but it’s not fleshed out well.

Its too black and white. It makes it seem like Demons are uncivilized and live like cavemen

Romance: I like the Heroine, Mana Demon Princess. Her unexpected cruelness but lovingness is rather cute. But then it got confusing when a few more girls were introduced. And I just can’t see the Characters intention. (I just hope it’s not a Harem)

P.S. I have respect for the Writer. It started off pretty good and I liked it. But it needs polishing.

(Anyways, this has a lot of mad potential if you gave more world building and character development. Maybe actually make it where Demons are like humans but are just different in way of living. Or MC has influence/op group in his Kingdom. Anyways, these are just top things from my head. But surely you can make it more exciting and OP.) [But not to the point of unreasonableness]

I really like good demons and stories revolving around them. However if this story had better grammar it would be one of the stories on the top of my list.

Unfortunately it isn't and by how the description still hasn't been fixed. Furthermore the latest chapter (39) still isn't fixed.

That is exactly what this tory needs. The idea is interesting, but the writing is truly terrible and borderline unreadable.