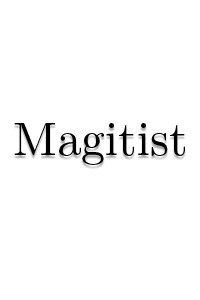 A frontier scientist is struck by wayward debris as he was observing a pulsar. Expecting death, the scientist is shocked as he is born into a world without science instead. What is he to do, then? Well, the answer is obvious: begin experimentation.

P.S. I'm a new author, so please help me improve! I love feedback, so many thanks in advance for any feedback!

Due to many reasons, primarily because I'm not satisfied with the fiction, this fiction is cancelled. I'm sorry to all those following it. Maybe the next one will be made more in line with expectations.

So to put the general warning first: This seems like a rational fic.

The locals are idiots for never realizing the obvious and obviously the MC is better than them. Like all rational fics this has an involuntary hillariousness to itself: Ragging on a character for using chants as crutches and inventing some magic AI a chapter later because he can't manage a spell without a crutch...

Mabye those people had a reason for what they did? I mean it's kinda positive that the locals can do things the protag can't, but his absolutely surety about the superiority of his methods is grating. Just because the explanation of the mechanics is bullshit doesn't mean the effects don't exist. Or the entire tool is a useless crutch.

The MC appears to be a Highschooler's idea of a Scientist. Capable of the most advanced physics, advanced informatics and social sciences as if specialisation wasn't a thing and more often than not people have only basic idea of neighbouring fields. Even less so of different disciplines.

That said the world is actually interesting and well built. It's clear the author has designed a well working magic system and a resulting political structure. The characters are engaging, have their own lifes and don't circle around the MC.

Overall this is a decent enough fic if you can stand the trappings of a rational fic MC. Overall it'd be better if the guy had some more humility.

Everything from the mc to the magic to the world grows in a smooth way that great. I hope their is lots more. Snake out

A great read with an unpolished start

The first few chapters are what I've come to expect of most casual writting, Awkward grammar and an intro that tries to be too much. But intros are hard and either through a lot of practice or tireless editing (and probably both) the later chapters are a joy to read and of a quallity that I would expect to find in a published novel.

(P.S) SunnyPack, don't worry about the intro, really. Wait till you've finished the story and then maybe edit or rewrite it with the full knowledge of the tone the rest of the story feels comfortable with.

Great worldbuilding, lacking in other aspects

The worldbuilding in this story is interesting, but you do have to put up with a MC who (at least up to chapter 7) is way OP in terms of how much he is able to "break" the world. As one other reviewer, Beyogi, says, it's classical rational fic fare.

The worldbuilding is by far the best part of the story. There's intriguing threads about the way the land is governed and the way that magic works in the world, and it's honestly worth reading for that. It seems like the author developed a fantasy world, then went "great, how do I break this as much as possible as quickly as possible?". I am interested in seeing what the larger plot turns out to be, as I'm not sure if by chapter 7 if we have even hit the inciting incident. The story could develop a lot of different ways and I'm willing to stick it out to see where it goes.

In terms of the protagonist's use of "science", it's not explained super well, but if you just want to turn your brain off for a while and pretend like it's reasonable for a guy to write a magical computer program that he uses as a home security system, well, it's fine. I have nothing against stories where the magic system gets broken to pieces by a smart protagonist- I think it can be really fun- and I just wish that this was developed more. If we were shown on screen trial and error, or actual scientific method performing experiments rather than just trying things and being good at them, I think it would work a lot better.

I really want to know like, if the conceit of the story is that the MC is able to do all of these magical feats because he doesn't have the cultural blinders on telling him he can't, what caused the magic system to develop like this in the first place? And why has it stuck around? And why hasn't anyone else tried to break it or apply "rational" thought to it at all? I'm hopeful that these questions will be answered later.

Eh. There's not a lot to say here. The MC is fairly bland, and I think the story would be more interesting if he were honest with the other characters about his knowledge and abilities. Right now, some of the dramatic tension is coming from "oh, he's just a kid he doesn't know anything", "but I /feel/ like he understands everything I say", "I understand everything you say, and also a lot more".

Having the MC hold himself so aloof from the other characters prevents them from really developing as people. For example, we get the picture of his mother as like, overly loving and hypochondriacal, but in forcing her to interact with the MC as an infant/four year old/seven year old/etc, we don't get to see her as anything other than an obstacle and annoyance.

That's why one of the most interesting relationships so far was his "tutor", who learned all about his abilities. They had a contentious relationship, and it's unfortunate that she left the story for the time being. I somehow think we'll see her again, since more effort was put into developing her relationship with the MC than anyone else!

There is a world of improvement between the first chapter and the seventh. In the first chapter, the author was struck by a strong case of thesaurus disease, and every sentence was crammed full of as many unnecessarily complex words as possible. It was so rough I almost stopped reading. By the seventh chapter, things definitely improved and I'm glad that I stuck it out.

Dialogue is alright, especially when the adults talk. When the MC decides to talk it's kinda pretentious sounding, but I mean, I guess I'm not sure what else I expected. Descriptions of things aren't super detailed, but it's not distracting.

No obvious or glaring mistakes that distract from the story.

Good grammar, world is building nicely, the magic system seems well made and I can actually care about the characters. At chapter 7 there is nothing else to complain about than that there are no more chapters, yet.

A realistic take on the Reincarnated Scientist

This story is of a reincarnated Scientist, but unlike most stories about scientist, this MC doesn't immediately figure out the science behind the "caveman beliefs" to magic.

While yes he gets into the simple magic pretty easily, since he knows the principle behind fire etc. and he even starts developing his own little magical programming language.
But then he comes upon a wall, which in my opinion is extremely logical/realistic.
Because magic can do things he can't simply explain with his prior knowledge, be it large scale spells that would need astronomical amounts of energy or spacial spells, the MC can't comprehend them and is thus stoped in his progression to OP hood.

But also the character aspect of the story is very realistic, the MC struggles with his beliefs of what should be possible and has trouble to adapt to his new reality.
He has to adapt his old personality to his new circumstances and he has to figure out what he wants to do with his life, should he try going getting back into his old universe or totally integrate into his new?

So we have a MC that has his fair and realistic share of trouble, but he is still a talented individual with a lot of potential.
What I hope for in the future of this Story is that the MC actually manages to overcome his flaws, not be eternally restricted by them, and of cause, I also want to see some epic magic and innovations from him.

A bit rough, but have potential

What are the natural rules of your world? Because if magic can do anything base on imagination, someone can just image their enermy death? I think a world without clear rules is for lazy writer, so that they can move the story how they want without breaking the rule. I hope you have a few good rules waiting for the M C to discover

I like your story. your MC have history. He have a philosophy that he follow. other character also make sense.

Easily a 5/5 story. Essentially no negative criticisms to give. Little scientific details do not bog down the story, at all. Author is obviously adept in their craft. I just wish releases were quicker!