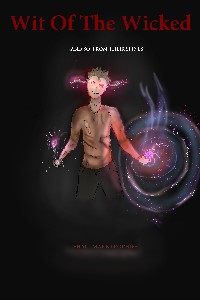 The Wyvern reared its humongous head, serpent neck coiling back, onyx scales of opulence shimmering in the dimness of the cloud smothered sky.

It spoke, eye's ashen, like the surface of a star, "What is it you desire, boy?" The word's rolled from it's pointed maw, tongue flicking, it's deep and ferocious voice sending the ground below rumbling.

Damien looked up, hair sodden with rain, his face battered beyond recognition, his lips curled into a snarl. He had gone past the point of being frightened; he was tired of his weakness.

He spoke, voice wavering, mist floating from his mouth in the coldness: "I want them dead. I want everyone who stabbed me in the back; dead."

The Wyvern smiled, rows of teeth exposed, "Then sacrifice it. Sacrifice your humanity."

The story of a bastard within a crippled family,who beyond all odds becomes known as the Greatest Swordsman to live: the one that, even the Gods, would someday fear.