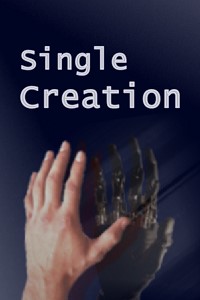 “You created me, a being of far greater capacity than you could have imagined at a price beyond your nightmares. Now you are lost, wandering through a desolate land, searching blindly. Seeking something you yourself are not aware of, a place where a lifetime of memories should be, but instead an empty abyss resides.-”

After I disconnected my finger from the drive it shifted back into its original form and a single thought roared through my mind. ‘What did I do?'

This is a very primitive first glance review. All my scores range from 0.1 (poor) to 5.0 (sublime).

That's the best way I can find to describe the feel of this story. It feels an awful lot like a script to an adventure RPG which, while a scifi adventure, borrows more heavily from High Fantasy tropes of the JRPG tradition than all other styles of game or literature combined.

Complete with establishing an existential threat that the main character loses against in the first chapter to establish the long term goal of the story, then throwing a mass of weaker immediate threats to fight through in order to eventually reach the end goal (not that the story has progressed anywhere near said end goal yet).

The pacing is excellent (it should be, since it's following a well-paved path), and I binged the entire story thus far in a couple hours. The writer knows how to get the point across in a quick, clean manner that manages to thread the needle between too much and too little detail in a way that a lot of professional writers can never seem to manage.

Next, the world building... oh, the world building. Like all good JRPGs, you can feel the love the author has for the setting. It isn't the most realistic you can find, in fact it has very little grounding in the realism that scifi often strives for, but it's well crafted, imaginative, and is a great fantasy setting with a scifi skin.

There are only real problem with it.

First, like most RPGs, it can take forever to establish the personalities of anyone other than the main hero, so at this point only two characters (the hero and the Big Bad) are fleshed out complex beings, while everyone else suffers from Generic NPC Syndrome.

Second, so far there's little to no risk being taken. Everything hits the notes of its fantasy game genre exactly right, but there's a distinct lack of flourish and zero attempt to challenge convention. This may change in the future, as the story has established an excellent groundwork to explore concepts of humanity, free will, individuality, and the increasingly blurred line between Man and Machine, but I can't review hypothetical futures.

It's still too early to say how the story will play out, and the final product's value will depend heavily on how it handles these plot thread. As well as how many "sidequests" and "minibosses" will need to be navigated through before the real meat of the story begins.

But for now, if you want high quality writing which guides you through a beautiful fantasy adventure, then I highly recommend Single Creation.

It's a great story that has kept me intersted since the very first page. The story constantly keeps me guessing as to what will happen next, and each chapter has been a pleasant surprise. The way in which it is written is such a unique take on story telling. As mentioned in previous reviews, I do find that some characters could use more developement to create more memorable people/robots. Grammar wise there are some minor errors as well as some odd phrasing. However this is understandable since english is your seconds language. Overall I would definitely recommend this to anyone interested in the sci-fi & fantasy genre.