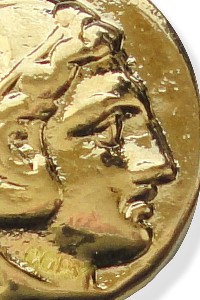 Remove Ads
Previous Chapter
Next Chapter
Al understood what was going to happen. Jonathan gestured to a fairly large, golden cube. It was at least one meter in length, and it gave out enough light to cast a shadow on the wall of the room they barricaded themselves in. Stroking his hand against it, Al found it was ice cold even though it was so luminescent. Also, it instantly formed condensation on the hand, even though the surface of the gold box stayed dry.
This was the phylactery, or at least the container for it. It wasn't wise to simply smash it either. Right now, Jonathan also looked strained and exhausted. He had been keeping the door sealed for at least a few hours, while they had rested. It wasn't that he didn't have faith in his barrier, as it stayed even though he took a nap too. They had been so tired too, that they didn't even mind the commotion outside.
Now, he was probably going to dispose of the box with his magic, but that would weaken the barrier. Al thought that it was up to him for that time to deal with the pursuers. Jonathan didn't make any effort to speak through telepathy. Obviously he knew about the threat beyond the door and didn't want to have to deal with it, so he moved slowly and deliberately, unweaving the defensive magic on the box so that they could physically crush it.
As he twirled his hands and undid the lock, the putrid odor of death wafted through the small room, alerting the person outside, and from that Al confirmed it was a very panicked human. If anything, if he had to be prepared to fight back. In his world, liches were never up to any good in the folk stories, so he had to accept that anyone who would protect them were evil. In the meantime, the smell got worse and worse and even though it was nauseating, it was a sign that the deed was almost done.
Instead of the vague sound from beyond, proof that the seal on the door was also fading, they finally heard intelligible speech, "Stop what you're doing. You're picking a fight with a very bad enemy!"
Many things happened at once. The door smashed open, gold shards flew across the floor near their feet. The enemies were three, and as the smoke of the explosion that rocked the door cleared, their forms became more and more clear. There was yet another explosion, from within.
"I'm done," Al heard a voice he didn't hear before. The vapors from the box also ignited in a show of green unholy light, baring the forms circling around them. The three protectors were too late! The phylactery had been destroyed, and with that, the curse of silence had been lifted.
Two of them were not people at all, but the unbelievable images of the human skeleton, clanking mechanically and advancing swiftly with sharp tool in hand, unable to comprehend that their purpose was now moot. The one behind was obviously a handler, also tired from working against the barrier for hours.
Now clear from the restriction on his magic, Jonathan was able to send telepathic messages easily, even while preparing to engage, "Celine. Stay back. I can take them."
But Al held up his rapier, ready to parry, but before he ever needed to, a wayward bolt of lightning flashed behind him, just avoiding him, flashing against one of the skeletons with seething heat and force, and blasting it to shards.
Unconcerned with the loss of its comrade the other one dashed across the smoky stone floor to Al with such a speed that protecting against the sharp knife-like weapon was impossible, but it too crumbled to bones just as Al was stabbed, so the weapon simply went free and grazed his sides.
Jonathan was already done, taken aback at the unconscious body of the controller, who could no longer manage the two puppets of bone.
As if to confirm what Al had saw, he said, "Yes. Those are human skeletons. Looking at it, real human undead."
Al was breathless, while he was relaxed. Now that they were safe, it was okay to stop and gather his thoughts. The other magician came too, but he already bounded by some of the rope they carried in their packs.
Jonathan looked at the dark hooded figure and sternly said, "You've died fighting against the invaders in this fortress. That's why you won't ever report back to your superiors," and let him go.
He mumbled loudly and an away without a backwards glance. Whatever he had seen, he couldn't comprehend it, and he disappeared into the dim halls of the cave structure, nearly bawling like a baby. Seeing how his master could defy death, it may have been an act of mercy compared to keeping him for information.
"Okay. We can return. Come here," Jonathan said. His boyish voice was very different than what Al had imagined. Now that his curse had been lifted, it seemed that his use of magic was also unrestricted. Yes, indeed, even as an outsider to this world, he knew that he was strong enough to cause another magic user into disbelief.
He came to stand next to Al and then the world was replaced by a strong white light, and then, they were outside again, in the desert-like dunes, only except now, the winds died down and the dust settled.
Since the air cleared up, Al could see the normal greenery of the surrounding hills. With the phylactery gone, the resistance against life would also disappear, and soon the area would be back to normal.
Of course, Jonathan didn't expect any of the dangerous wildlife to return just now.
"Now, I will answer all of your questions. But first, let me know who you really are, sister Celine."