Broad shoulders. eight feet tall. Girthy waist. Short, yet stocky legs. Hands hard enough to crush a man's head. An angular face that had a single, horizontal eye hole that almost looked like a visor, four vertical slits that looked like a strange mouth of some sort, and finally, a rough light cyan surface. 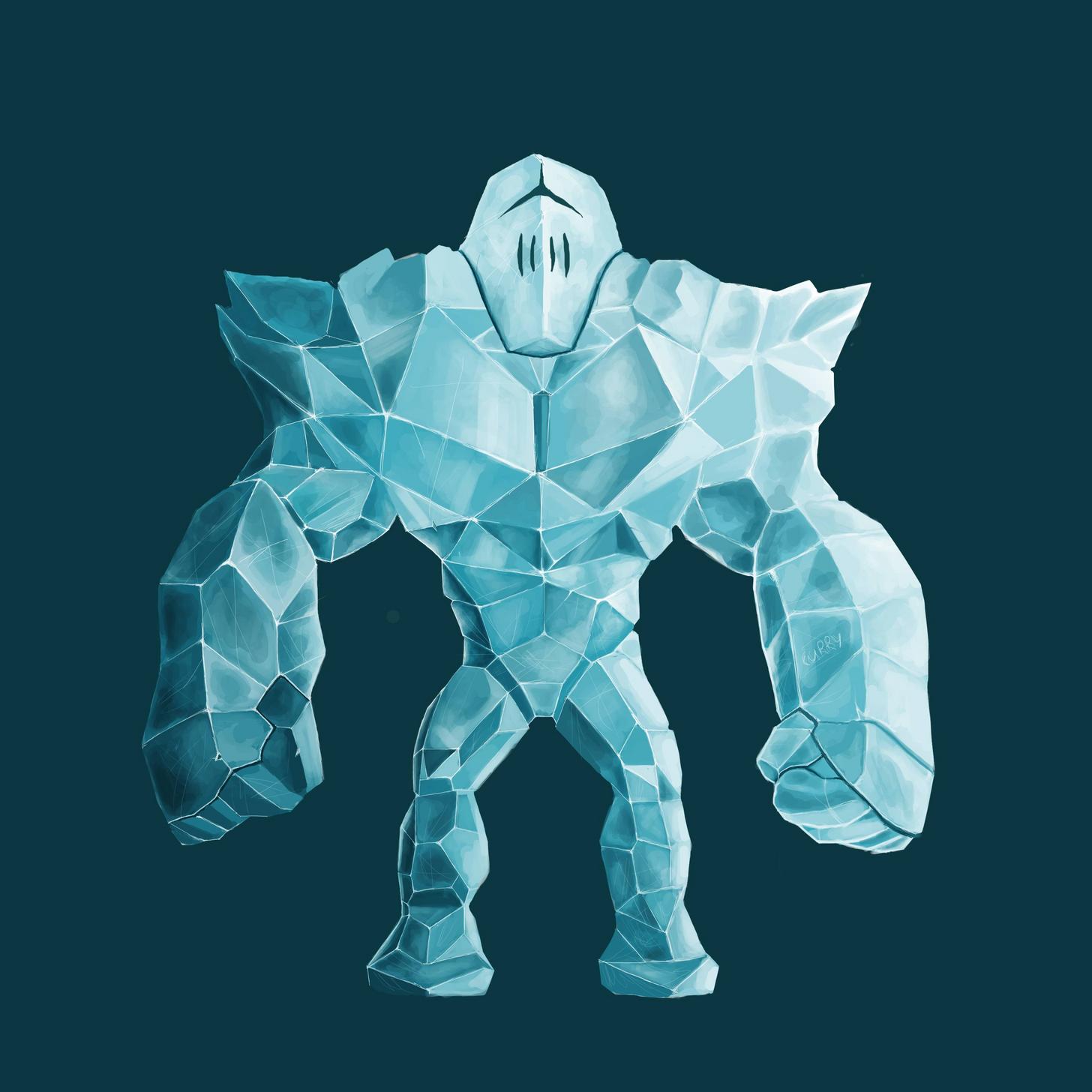 "You're pretty big, huh?. Actually, you're really big. You need a name. Hrmm..." Daz said to the giant sea-blue coloured golem that was idly standing before him. It was as described, big and masculine. It cocked its head to the side slightly in response to Daz's words, almost as if they were unfamiliar to it.

"Got it. Your name is now Rimmy McShineston. Sound good to you?" Daz asked. He rarely named things, however, like with own name, Darenzo Hamilio, which he had shortened to Daz, he either gave something an incredibly uninspired name or, like with the golem in front of him, a name brimming with creativity.

The Golem shook slightly, and then uncharacteristically got on to one knee, cracking the concrete beneath it. Such an action looked very odd considering its large stature, but Daz accepted the gesture as one of acceptance of either its new name, or of him being its Master, either was fine with Daz.

Daz admired the crystal man for a few more minutes before choosing to inspect his brand-new companion with his new skill. "Higher Identification."

"Wow. Y-You've had it rough, huh, buddy?" Daz said with a sniffle. He could feel himself choking up. What was this?! Unending loyalty?! Daz couldn't feel any more appreciative than he did right now.

This Golem, no, this man, had started out the same way as Daz, or in a similar circumstance, perhaps on another planet, maybe as a different Species, but regardless, he had owned a Jewelled Core but had somehow gotten consumed by it or overdosed on power and died.

Now he was willing to serve and help Daz because he had accidentally resurrected this man, this Golem, and coincidentally shared the same beginning as he did. Daz found this all to be very touching.

Rimmy quickly stood up and took a moment to look around. He stared at the sun for at least a minute before he looked back at his Master. Were he to have an expression, surely it would be one of urgency. His head suddenly started moving around along with his arms, but Daz had no idea what he was trying to convey.

"I'm sorry, Rimmy, I don't know what you're trying to say. Can't you speak?" Daz asked with care in his voice. If he didn't take notice of and care for his new friend's needs, then what kind of master could he consider himself to be?

Rimmy immediately gave up communicating via hand signals and looked around once again. Daz could tell that he had something vital to say and Rimmy was obviously far more intelligent than Daz's first assumption of how smart a Golem would be.

Seconds later, Rimmy crouched down with his hulking body of crystal and pierced the ground with his index finger. He then began drawing symbols.

Daz was fascinated by this. How ingenious! What a clever way to tell Daz what he wanted to say. Daz waited for a minute or two, and Rimmy finally finished and stood up again before he gestured to his carvings.

Upon looking at them, he saw a line of simple pictures and numbers.

Rimmy was pleasantly surprised by Daz's quick-wittedness. Although he had tried his absolute best to show what he meant via pictures since he didn't know how to write the language his master was speaking, he was still impressed by how quickly Daz had figured out his exact meaning. So he nodded his giant blue head gently.

Seeing this nod, Daz sighed in relief. In all honesty, it was his high ingenuity that had helped him translate the symbols that Rimmy had created. He now knew that Rimmy, and most likely himself, needed gems to live.

"Hold up as many fingers to indicate how many hours that one point of energy will last you, Rimmy," Daz said in all seriousness. He had no plans of letting his new best friend die, not today, not ever. Immediately following Daz's order, Rimmy swiftly held up one full set of fingers and one more from his other jewelled hand.

"Six? Perfect. It's about eight-thirty in the morning, so we have three and a half hours until the attack. I can't afford to get any gems from the shop since I need to keep my last four thousand points for emergencies. But don't worry, buddy. I have a plan. First things first, I need to prepare my shovel," Daz said with a grin much to the relief of Rimmy.

Daz then returned to the gore-filled exterior of the base where he had fallen unconscious. His shovel was sitting right where he had left it, but strangely enough, the blade had turned completely crimson and the handle had gained two protruding spikes coming out of it vertically.

"What on... is this because of that wisp I ripped out of that Zombie's head?" Daz asked rhetorically while he activated his Higher Identification on the tool. Rimmy just watched from the small pit on the road that he had created from his weight by jumping over the gate.

"Okay... what the fuck is this skill?" Daz mumbled before he immediately used his higher identification on the skill he had gained from his class.

"Oh. It was SSS-Rank... higher tier... what the hell is up with these abilities anyway? I guess this explains why I was able to fuse the shovels. None of my other skills sound super important, though. Not enough to warrant identifying them anyway. Not now. We have a job to do, Rimmy," Daz said after he had regained his composure somewhat.

He chose to ignore the part about a God since he already had the attention of the God of Crafts, so what was one more God to add to that list?

Rimmy looked at his master with a curious tilt of the head. Daz took a deep breath and straightened himself up with his shovel now in his hand. He then swung around to face Rimmy.

"Wanna go rob a jewellery store?" Daz asked the Golem while he smiled and slung his evil-looking shovel over his padded shoulder. Taking care of his new friend mattered more than the issue with the shovels, for now at least.

The 2 most recent chapters can be viewed early for all $1 patrons!

Hello, You're Through To Hades, How Can I Help You Today? | Paradox

This novel is a participant in The Writer's Pledge.