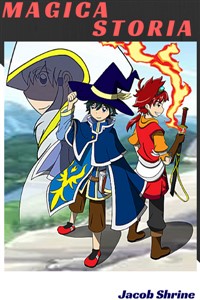 Benjamin "Benny" Estrella is an average kid living under the shadow of his high-flying family. He resigns to his fate that he will always live an average life, overshadowed by everyone around him. That is until he receives a mysterious old family heirloom. Benny doesn't know its significance until after a series of events where he is transported to Mundo Magica, a parallel world of Adventurers and Magic. There he meets Tenryu Fyreroar, an Adventurer with a penchant of setting things on fire with his Fire Magic and Swordsmage Skills, whom he seems to share a strange connection. As Benny acquaints himself to his new surroundings, he is thrust into a world filled with new possibilities and adventure. In this world, he might possibly find the true potential he has deep within.

That is...if he can survive.

Just needs a spark to make a nice blaze.

Because I can make fire jokes, too.

Benjamin, an underdog forced to live under the shadow of a family that produces anything but, is set up to get that bit of specialness that he's always missed.

Just not in the orthodox sense.

Magica Adventure is one more piece on the shelf of what I'd like to think of as "brink novels". Everything needed to be an epic tale is within sight: a golden shore full of that gilded feeling only the best fiction can deliver. The voyage, however, hasn't quite finished.

Grammar and stylistic choices are the main obstacles. With missing words every few paragraphs and strange sentence structure interposed with its more impeccable strings, reading through everything takes longer than it should. The effect is much like lag spikes in an MMO, even the greatest of them becomes unplayable with too many.

Most distressing is the narration's tendency to report on things that were already mentioned/implied in the story and vice-versa. Authors who ensure that their readers can understand what's going on and who's who is a mark of prudence everyone wishing to spin a tale of their own needs to grasp. The spectrum, unfortunately, runs along both ends. Conciseness trumps verboseness nigh every time.

It's the lesser of two evils, but it still has me stopping to sigh at some points. A marathon from the first to most recent chapter feels more skim-worthy than usual. It's not enough to make those who see this stories silver lining drop it, though.

The plot content isn't said silver lining, but it isn't inherently damaging to those who enjoy portal fiction (or isekai, as it is more commonly known as around these parts). We are greeted with a more or less standard intro that tips towards heavy info dumping yet manages to steer clear of My Immortal’s ilk. Travelers seeking another unique world to peer into will not be disappointed by Mundo Magica.

That being said, Jacob Shrine makes up for a great portion of the story’s red marks by delivering truly interesting characters. They didn’t catch on to me from the very start, but by chapter four or so, I found myself sympathizing with, and even wanting to hug Benjamin. The fact that everything he does is simply seen as not good enough sticks with the extended home arc. Unlike a great many others, time is spent to detail Benjamin’s life before crossing to the other side so he doesn’t become something of a tabula rasa. Surely, a price is paid for this in pacing, but it’s an investment well spent.

Shades of Benjamin’s same demons are shared by Tenryu, who has an annoying verbal tick, but otherwise comes across as a personable character when he doesn’t commit acts worthy of ire. As odd as it may sound, this is a good thing.

The measure of what makes a good character isn’t likability, but personality. And our leads have this in droves. It’s enough to make me willing to swallow the previously mentioned hang-ups. I’m genuinely interested in how the two and their friends will develop.

If you don't mind a few constructional gaffs and find yourself wanting to know what would happen to an average boy given a book of spells, a destiny, and a push on the back towards parts unknown, look no further than Magica Adventure.

The journey has just begun.

To me this is a great fun adventure story in the making, the author has clearly put a lot of heart and effort into the creation of the world of Mundo Magica, it’s lore and lovable characters we get to meet throughout the journey of Benjamin "Benny" Estrella.

The story so far (as of the first 30 chapters) has been centered around discovering and learning about this world called Mundo Magica which seems to be a parallel world to our Mundo Gaia (Earth) where the difference is the existence & application of magic. We get to learn about this world full of wonder through the eyes of a kind and insecure boy called Benny while he learns about himself and his true family legacy which his great grandmother has painstakingly been preserving through decades unknowingly to the rest of their family of talented entrepreneurs & artists who have caused Benny to have suffered through a lot of insecurities and self-doubt throughout his life; which also caused him to become kinder and humbler than most.

I would say the main strength of the story lies within its characters, how they are portrayed, interact with each other and the friendship between Benny and those he meet and bond with during his journey. But no story is without its flaws, sadly the biggest problem of Magica Adventure is the grammar and the style used. As I’m not a native English speaker myself I’ve found myself not to be all that affected by the faulty grammar and weird sentences in a way that detracts from my enjoyment of the story that’s being told but I can see how others might have a different experience in this regard. I’m sure however that the authors writing will get a lot better with time, there’s already improvements from the earliest chapters after all.

If you’re looking for a fun action fantasy adventure with lovable characters in a magical world very much like an RPG with references & parallels to our own society, and you can overlook the grammar then I’m sure that Magica Adventure will be entertaining you!

I’ll personally be looking forward to following the story from now on. Keep it up, Jacob!