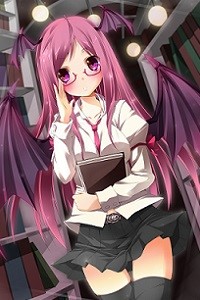 Ryley Allard isn’t a demon, and everyone in the Demon World knows it. What they don’t know is that he understands next to nothing about how a criminal justice system actually works. A detective? A lawyer? A law expert? If it means getting to keep his head attached to his body, he’ll be whatever he has to be… Even if that means he has to create the demon law system from the ground up, one mystery at a time.

The cover art comes from google images and is property of Nironiro. If you are Nironiro and want your art removed from my fiction, please contact me and I will do so.

The story starts out with a stock standard kind of feeling. We have an immediate conflict: the endangerment of Ryley, the MC's, life right as he's dropped into a world chock full of demons, and slimes, and fantasy kitchen sink races that one would associate with the phrase "hellkin". Don't let the intro fool you though. "Ryley Allard: Demon Law Expert" manages to suck you in far faster than its peers.

It's too soon to tell if it will stay as such for the length of the tale, but rather than pledge a blade or suddenly acquired magical talent to his new host's cause, Ryley lends his wit; offering to set up a code of law in a realm that has none. This is where a great chunk of the humor comes from, as Ryley is the furthest from a law expert as the average person can get.

Couple this with succubus puns, jabs at political correctness, and a touch of legitimate amaeture gum-shoe work and you have the start a very interesting (and amusing!) story.

I'd recommend this until hell froze over if I could.

...And by the way, ace attorney itself is a courtroom drama on drugs.

Well, as far as courtroom dramas go(if you can even call this one) this one focuses heavily on the humour, and does a pretty damn good job at it. Plenty of caustic remarks, a healthy amount of being retarded, and lots of political......incorrectness.

Unfortunately, if you came here for the "drama" or "mystery" aspect, you're not going to get a lot of it - as I said, this thing is on drugs. Though, at the time of writing this, the first case hasn't even finished yet, so there's much future potential.

This is an amazing comedy, the interactions between characters is what makes story so good, the demon world is a mix between modern earth and magical medival fantasy, there are plot holes like how can a kingdom work without rules and how could it develop scientifically without laws and protection but if you ignore those details and just concentrate on MC's struggle it's entertaining.

Reviewed at: Chapter 76 - And Then You Die

Ok, so it's been 3 years after the latest chapter has been released. I found this story by happenstance but I am glad I have read it. I really hope the author continues this work or starts a new story because I enjoyed this a lot. Now I am going to go read Clock link(The author's other story). Give this a try, you may like it.

I would love to just make up my own legal system. The latest chapter has the "lawyer" playing bocce ball against a witness. I love the ridiculousness of this story.

Abandon all seriousness, ye who enter here. This is a story that's all about the giggles, puns and facepalm-worthy moments.

The story is quite well-written, though it is very conversation-based and there is a ton of back-and-forth conversation all the time. There's not much in progress so far, but that's all right, because the author is making it all about enjoying the hilarious stupidity that's going on right now!

First time reading this kind of novel and i love it.

Love the Suck Pun too

a new level ridiculousness and hilarity

This has to be one of the funniest stories on this site. I find myself almost constantly laughing every chapter. Ryley's snarky comments about how the demon world and the demons themselves are so messed up (mostly in the head) go beyond the normal ken and makes you laugh at how out of this world everyone is. 10/10 Would read again.

This is, essentially, comedy based on one 'straight man' (in the comedy sense - well, probably the other too,) living in a world gone mad. There's little rhyme or reason to the ridiculousness, but if you find continual spit-takes and 'wait what' moments funny, you'll probably enjoy this. It is, at the very least, packed full of jokes; some of them were fairly meh for me, but there's enough there that I usually found something to snigger at in each chapter, so that's definitely a plus.

The grammar and spelling are good, the charachter building is worthwhile, although fairly light, and everything is at least internally consistent so far, which is a plus.

The downside is that the first arc (it's just starting arc two) seemed to drag on somewhat; sure, the plot is mostly an excuse for cramming in more jokes, but I was getting a bit tired of sudden reversals. There were attempts made to foreshadow some of the 'OBJECTION' moments, which I appreciated, but by the end I was starting to feel a bit 'get on with it' already. Hopefully future arcs will either conclude more quickly, or include a bit more actual intrigue/charchter growth instead of just random info reveals to jerk back and forth between winning and losing just for the lulz.

On the whole, though, this is very firmly 'above average' in my opinion, and that's doubly impressive because it's a comedy. Nice work author, and I'll probably keep reading until I get tired of the jokes.

This novel is a comedy, don´t let the title lead you to believe it is about some cool, know it all man, he is a common person that got thrown into the middle of hell and needs to remember every detail he can about how a trial works or his life ends. The dialogues present the demons as a complete ignorants of what law and crimes are, and it is fucking funny that they have something similar to modern society in every other aspect