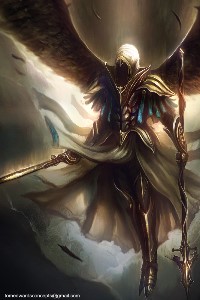 "Because I am Tianzi Daiyu!"

you may be mount tai but i am the sky above it!

was gonna use" you may be mount tai but i am mount everest" but its sounds... too cheesy, so i picked a less chessy one

After xing blood swore her loyalty, they did not talk the whole way through the auction. Xing was simply too shocked with the eyes no longer visible to her but it has alrdy been branded inside her memory. none could blame her as there are only 20 known unique divine eyes. these eyes are so rare, only 1 in 1 million would have them dorment inside them with only a 20% chance of opening them. some of them are even only seen once every  generation while the rank 1 and acknowlegded strongest eye," Photon Galaxy Eyes" havent been seen in 4 generation! let it be known, with anyone with divine eyes are basically promised a spot in the top.

It is no wonder xing who is mostly ignorant would be so surprised when a never seen before divine eyes appear in front of her. the eyes were even of a multi-verse! so she could only conclude it was leagues beyond the so call rank 1!

Although niether of them spoke any words, as soon as they arrive close to the gates, some of the many people in line gossip about them, some without trying to hide it although it wouldnt have mattered with daiyu's enhanced hearing.

"hey boss! dont you think you can gift us that ass?" one particular lecherous person said to his group. the man was of the human descent dressed in simple armor with metal leggings. his hair, unnaturaly spiky with almost yellow teeth. his facial hair was only fit for that of a thug.

the group of his each wore the same outfit except the man in the middle out of the 7. he was dressed in flashy clothing with jewery all over his body. with a single wooden sword attach to his waist which would have looked cute if not for the fact that he simply looked too ugly! his body uneven with skinny legs and a round belly mixed in with 2 scars running down his chin and nose respectively.

the "boss" took a glance and said " take her" the men around him grin wickidly, each already taking steps towards daiyu and xing.

"look! they are about to ruin that poor girl!" someone said silently while looking back only to see no one caring. why would they? to them not only was she not worth it, her face was beyond ugly! ( if i offend you with this, i dont think you should read my story as its only gonna get worse. besides, you gotta admit the reality of the impact your " attractiveness" has on others. to make my point, who would u talk to? the person on the left who has atleast a decent face or the person on the right who has a face you cant look at without cringing? ) now the ignorants would be confuse about this statement as her face was pretty! and was only marked with little wrinkles. But in this alchemy realm, wrinkles which could treated with just a 100 silver-stone, were pratically unprecedented. the other, more sympathetic people were simply too afraid of the group.

upon noticing the men walking towards them with with lecherous grin, xing couldnt help but laugh inside." who the fuck do these bastards think they are? my young master here has divine eyes!" she thought with justified overconfidence.

seeing them sorround them ( weird but it makes sense _-_ ) Xing gave off a disdain gaze on the crowd pretending not to notice anything.

"just put a mask on her and we got a princess" one of the man joked. the others not responding as they did not find it funny or worth a comment. the man already with a ugly smile anticipating laughs couldnt help but to grumble. " your father has made a joke, LAUGH!" he thought to himself.

the others not noticing or caring waited as one of them stepped up and introduced them. he was the same man who pointed xing out. " we are the cloudern brothers! come with us if you want to live." he said, ignoring daiyu. why would he care who daiyu was or where he is? they simply looked like beggers which is why they targeted xing in the first place. beggers dont have connections thus therefore "free" in this dog eat dog world.

"of course young master!" replied xing. she was now the general of daiyu! why should she care for these pathetic bugs when her young master has in her mind the strongest divine eyes! " they should just disappear from her master sight!" she thought evily to her self with a wicked smile.

daiyu noticing this couldnt help but wryly smile " how the fuck she turn from a gentle loving girl to this aggorant queen already?" he thought without sharing. this atttude from xing could not be blame on her as to her daiyu was already the immortal emperor! and the promise he made did not help the situation at all nor did her background of always getting push around! she has been lucky not to be rape with the body she has.

"hey!" the man scream in disbelief. which poor begger would act like he, their faher did not exist?! the group of thugs moved forward to once again stop their movement. the same man once again step out, this time with his sword unsheathed pointing at daiyu, now noting that he was the problem.

"why need your eyes if u cant recognize mount tai when its in front of you!" asked the man aggorantly, clearly threatening to blind daiyu.

"so you are mount tai?" daiyu asked bemusedly. what the fuck was this fly doing in front of him, he thought. even godkings had to bowdown, what gave this insect the courage to step in front of me?

the thugs noticing he hadnt put them in his eye were further angered and drew their blades by his neck. the man still pointing at daiyu eyed asked with disdain " give us a good reason on why we should let you live?" already deciding to end his life. fuck, who was this bitch to talk so aggorantly infront of me! he thought to himself, unknowingly sealing his fate.

at that question, daityu's smile vanished without a trace. his eyes narrowed as he look into the mans eye, " i shall enlighten you then!" he said coldy. nature seemed to have token notice of his bad mode, with the clouds above darkening, birds to insects all escaping the area to the four corner as their primal insticts sreamed with horror "RUN!"

the thugs not noticing this kept their aggorant smile, waiting to kill him as soon as he finish talking for the fun of it.

"even those without concious or intelligents fear me, yet these mere bugs dare threaten me!?" daiyu who cultivated the Furious Immortal Tyrannical Physique only to minor stage could not control the affect it has on his emotions after without killing for a long time thought to himself, bloodthirtyly. " 3! you people simply cant decide whether i live or not!" daiyu said coldy and continued, "2! you may be mount tai but i am the sky above it!" at this daiyu paused for a moment, and smirk coldy!

the thugs felt a undescrible urge to laugh as this was the most,proberly will stay so, aggorant speach! they each glance at each other, each understanding the message with mirth, " let him finish"

daiyus divine eyes  started releasing flash of lightning, visible only to the worthy, " 1! you should have ran with the count down i gave you! now perish!"  he finished coldy.

the thugs nor the crowd did not have time to comprehend what happened as a blindy flash of white light seem to have expand around daiyus body, blinding everyone in the area.

in a flash, the blinding vanish along with the thugs and their master leaving everyone else to wonder in shock and fear, " WhAt Da FuK JuSt HaPpEn?!!!!" .. with no one noticing, including diayu, a smile creeping on the egde of xing lips " as expected"