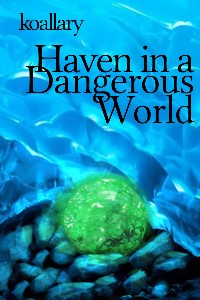 Haven in a Dangerous World (Old)

We were lost. There was nowhere to go, no place to turn. Everything looked the same. I about broke down, but I couldn’t allow myself the luxury. Not when she needed my help just to keep sane. She was already losing it, already starving for lack of food these past fifteen days. My only gratitude was that we did not lack water. The morning dew was plenty to keep us quenched throughout the day as we wandered. Only, it also chilled to the bone, and each day her cough was growing worse. So, I plodded along with her on my back, hoping desperately for some sort of salvation. I thought it a hallucination at first when I stumbled upon the salvation we had been granted. It rested there inconspicuously between the massive boulders of our continued maze, a strange tree of ice.

I didn’t even think about moving for a long time–or rather than moving, I just stared at the wall, not even daring to think. I had this weird feeling that if my brain began processing again, that something, that terrifying stare would come back and rip through everything that I am. It was a feeling similar to a child afraid to move out from under the blankets because of the monster under the bed. I knew that something was long gone. I knew it wasn’t coming back, at least not for a long while, but the fear to move out from under the blanket was still there. So, I stayed, staring at the wall, thinking of nothing while my nonexistent heart still pounded in my imaginary throat.

I didn’t come to my senses until I found Niko nudging me, informing me that he and all the other fishes were hungry. It broke me out of my reverie, and the childlike fear drifted away. I sigh and sent half of them down the hole, then turn my attention to my two guests. They were still conked out on the floor. How long had it been? A few hours at least. It was getting close to sunrise. I could feel it.

“Grow towards the sun, huh,” I mumble. And with that thought, [Elemental Manipulation] was brought back to my attention.

Um. This is rather confusing… This is not quite what I thought it was when it said [Elemental Manipulation]. I thought it’d be more like the periodic table, manipulating electrons or protons or the base elements inside of something. Instead I get whatever this is. I feel wronged, somehow. I mean, I wouldn’t really classify plants as earth… And isn’t ice water already? Just in a different state. Isn’t really manipulating one manipulating the other? Why are they classified differently? And fire isn’t really an element at all. It’s just heat… Yeah, feels more like a cop-out.

On another note, looking at this skill makes me feel that I’ve been using [Ice Manipulation] and [Earth Manipulation] wrong, or at least not to their fullest. The word element jogged some memories for me, about atoms. I might be able to do something with that. It looks applicable especially now that I have plant manipulation. Maybe I can help them evolve though manipulation?

Now that I think about it, I really haven’t been using any of my skills to their fullest, or anything else that I have for that matter. Maybe I’ve just been stressed, too worried about surviving. Or maybe it’s this slight feeling I’ve had all along that I’m not supposed to be here, and in the next moment I’ll wake up and it’ll have all been a dream. Either way, my creativity has been stunted, if I had any in the first place. The ordeal a few hours ago washed all that away, though. I’m here now, and it looks like I’m here to stay, so I’m going to make something amazing. With this skill, I finally have the means to do it, something that’s been itching in the back of my mind for a while now, and that itch just exploded with the thought of growing towards the sun.

Yes! Yeeeeeeeeeeeeeeeessssssss! Yesyesyes!!! Finally! [Karma] leveled up and I leveled up twice just from completing the {valiant} path. I knew it was worth it. And I even got a unique aura. I wonder what it does.

I don’t know what that means, but it sounds awesome! And crazily over powered. There’s no way I would have ever gotten such an aura without [karma]. I have a hunch that I wouldn’t even have gotten a unique aura from the rare path if it weren’t for that skill.

[Karma]’s been such a pain in my life. As much as I get good stuff because of the skill, my life as basically gone to crap because of it. It almost feels like I’ve gotten more of my share of bad luck than good, but it’s finally starting to pay! I mean not much right now, but it proves that the skill actually gets better as it levels. I was worrying that it’d actually get worse from how my luck’s been. Even though my 20% chance of my luck reversing didn’t change at all, 10% chance of my luck staying good instead of reversing is like a boon out of heaven, and the 5% chance that I’ll get better System rewards just makes it all that much sweeter. I’m going to keep churning out the goods. Heehe.

Let’s do {ingenuity} next! It’s the most expensive after {valiant}.

Ug, I’m tempted to look and see what the skills do, but no, wait until the end. I wanna spend all my path points on every single one of my paths. Leave figuring out what everything does until the end, that way it’s a surprise. I like surprises. Well… as long as they’re good ones.

Okay, the starter seed was to be expected. And now, {Defender}.

Cool, another level. And another aura. Let’s complete it again and see what else it gives.

Huh. Another aura. I thought it’d be something different. |Aura of the Lost| sounds kind of ominous… I hope it’s alright. It’s another unique one, surprisingly. [Karma]’s new effects are showing already. I mean, {defender}’s only an uncommon path… Well, with the path points I have left, I can only afford {beginner}.

I looked back at all my notifications. This is crazy! Three level ups, and a ton of health and mana, among other cool things just from completing paths. Suddenly, my world isn’t looking so dismal anymore. I rub my imaginary hands together, excited to jump in and see what all this stuff does. First the skills.

Woah. Um. Am I classified as a dungeon anymore? I feel like my subtle definition I’ve been getting ever since I first woke up has now been flipped on its head. But really, this is actually perfect! It’ll be much easier to do what I want to now.

My jaw dropped. Well, if I had one, I’m sure it would be on the floor. I felt it as the |Aura of the Lost| activated on its own. It was a bizarre feeling, like my world was shifting. My domain settled into an in between. It was somehow both here and nowhere, tendrils of it drifting to several places at once.

I felt one… settle, if that was the right word, in a desert, I think. The aura brought back feelings of overwhelming heat that stretched on for miles amid the sand dunes. I felt another settle in a remote valley in the middle of the mountains. Another in the middle of the ocean, and another in a confusing forest. More and more spread out to places that were strange and disconcerting, causing whoever entered to become increasingly lost.

The hub of connections felt weird, but also it caused me to settle. It was the best I had felt in days. It felt right, like I’ve always been meant to gather in these lost ones, to take them under my wing. Yosh! I had a definite purpose now. I’ve got to make a place for them to stay, not to mention beef up my defenses. And oh how I’m liking the look of that |Trap Schema|.

I hit yes. Information filled my head and I couldn’t help but smile. This is going to be fun.

AN- So many blue screens… Ug. Took a week break, sorry about not updating. Next few updates should be more world building. What do you think of the rewards for the paths?

Bio: I'd rather live in Katsgat.