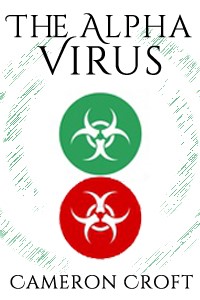 When the world's most eccentric software developer takes it upon himself to end all war by wiping out most of humanity, he includes a special little surprise in his latest groundbreaking games console. His new augmented reality game, The Alpha Virus, seems to outstay its welcome long after the player signs out.

Fatally flippant college student Liza Volkov has had an ... unconventional upbringing, and has finally escaped her survivalist family to seek her fortune in the wide world. But when you try to escape your past, life has a way of dragging you back down.

When every day is a fight for survival, the smart and the strong come out on top. No nepotism. No class systems. No boring corporate jobs. It's a constant fight, and Liza was born to brawl. Is it so bad that she isn't completely broken up about this new world?

Do you have a plan for the zombie apocalypse yet?

Hell yeah, she killed it. In all the best ways.

I was iffy at first, but once this story gets rolling it's a hell of a ride. My only regret is finding it so early on, I'd love about another hundred thousand words of just Liza being a zombie-slaughtering badass. Even so, I can't wait to see the town-building or bunker-building or whatever upgrading section is coming up.

A hat-tip to the author for such a promising start, and I look forward to seeing what she delivers in the future.

Refreshing, but with one major issue.

This story is a refreshing take on the zombie apocalypse LitRPG group. The main character is supposedly well prepared for an apocalypse because of her father being a prepper and forcing his children to undergo training, while the cause of the apocalypse appears to have greater plans in the works than a simple desire to witness humanity struggle and die.

However, the main character seems to have a great deal of artificial stupidity injected into their actions every so often seemingly for the sole purpose of creating drama, both for themselves and for others. Beyond that, the main character is well fleshed out as a living breathing human. There is, however, an issue with this. While the main character is well fleshed out it feels like thus far her friends and those she has encountered are relatively one-dimensional, especially when compared to the main character. If these issues were to be resolved I think this story would be far more successful with me. As it is I am going to continue watching in the hopes that these issues are merely because the characters have not had enough time to be expounded upon.

so, i really like the story and how you are letting it flow.

i think the point system in how its used is a quite unique way to give it a lit-rpg feel in a zombie genre. although liza makes some stupid mistakes in judgement on zombies i like that part because that gives her a human feel and nuances the survivalist mentality and training. instead of a cyborg that does everything right when shit hits the fan.

i really am curious in how this story will go, and keep up the good work!

The story is VERY good.

It's a shame the story is on HIATUS and the Author hasn't been on since last year.

Tragic with almost no humor - that's classic literature in making ;)

I don't like classics.  My mood isn't right to read tragedy with no humor.  But the "game system" looks interesting enough.  The story is really good.  Pity, the author seems to be away...

Author killed it after Ch2

This is actually my first review ever, so if you have anything to comment on or add, then please do leave me a message telling me what I might have missed or left out.

As you can infer from the title, I left after reading the first sentences of chapter two. Despite this in RRL standards it deserves around 4*.

Why do I think so?

Let's start off with the good things first. The story so far seemed unique and somewhat fresh, despite the "zombie" idea existing for more than 50 years, by combining Zombies as well as the everpopular lit-genre which I'm also guilty of. The author seems to somewhat know where the story is going to (Not sure whether he has every meticulous detail planned out), and knows where to start (even though I personally dislike being thrown in the future of the story, mostly because it's like waving a sign saying "it will get better later, so read on)".

Next the grammar. So far I only found some small mistakes which only partially disrup thte flow of the story. Nothing that should eat your eyes inside out. I suggest putting it through some advanced editing software shortly, e.g. grammarly or prowritingaid (warning, last one can also impair your writing as well)

The characters were so-so. They have feelings, they have emotions, but there's not enough of them as of the prologue. What makes your character unique? Are there some habits he picked up, especially since he's in a very tense and nervous environment? Make them do more things, so that we know what might be going on inside their head. But remember, don't only tell, but also show. Something, to which I'm getting to now.

Style: This is why you lost me. Some of the sentences are disrupting, and don't flow well. Other sentence parts are either plain unnecessary (redundant) or should be expounded on. Look at the first sentence in your 2nd chapter not written in italic style (which is okay, by the way). This is a case of "more showing, less telling" you could apply here. Don't tell us that Tucker was being a total butt about the remote, but instead show us that he is. The reader is not stupid, it will make up the gaps, read between the lines, make the connections needed. Compare

Tucker was being a total butt about the TV remote, and that was really pissing Liza off. She kicked at him from her comfy spot on the couch, under a thick warm blanket. It was bitingly cold outside even though it was only September and there was plenty more cold to get through before the weather started to warm up again.

Leaving the warmth of the blanket to kick at his ribs with her toes was a sacrifice, and she really hoped he appreciated the seriousness of it all.

Tucker refused to let go of the remote, not even after Lisa kicked him from her comfy spot on the couch. The moment her foot got back under her warm blanket, she huddled into it, shaking away the biting cold despite being september and slightly frowned at Tucker.

I acknowledge that I made the sentence too long and personally would like to cut some parts (or split them), but this is just an example, so it's alright.

There are other stylistic choices you could/should have taken, but in the end your story is already good, it just needs more editing. Don't succumb to the editing loop though, a loop where you just edit everything over and over again until you can't stand the sight of your words anymore.

Have fun while writing.