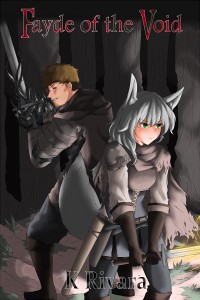 Fayde of the Void

Peter Wright was an ordinary guy, living a mediocre life, but fate had other plans. Peter finds himself in a parallel world with nothing to his name but a wholly unimaginable power. Now Peter Wright steps forth to unravel what is his destiny, as Fayde of the Void.

Click here to view information on characters, locations and maps for Volume 1 of Fayde of the Void : Volume 1 Information

Please vote for me on Topwebfiction! Thank you! Vote for me!

Good but has a chronic case of tell, don't show.

Overall the story is interesting but something was bothering me for a long time as I read, and I didn't realize what it was until the start of volume 2. This story suffers from a case of tell, don't show, syndrome. By this I mean it cuts away from dialogue and depictions of environment and events to randomly start spewing exposition. Any time that is see the phrase "he felt that ... (Insert 2-3 sentences of exposition here)" I cringe. Telling the audience straight up what a character is thinking or feeling takes you out of the story. Having internal dialogue is fine, but just stating facts about the situation in between two lines of dialogue doesn't work. A good rule of thumb is to ask whether you could depict what is being stated in a sentence if the story was made into a movie. Imagine trying to take the sentences "He knew that the enemy had limited troops. They should be conquered easily and he would be promoted to general." and depict them in a movie. You can't. You could comunicate this in any number of ways through dialogue between soldiers or through visual descriptions of what a scouting party is seeing but when you just straight up say it.... it doesn't work, and it takes you out of the story and constantly reminds you that you are reading a story. It is like trying to get a full nights sleep except someone nudges you awake every 10 min. Yes, you can get through the night and probably spend most of it asleep, but your sleep/story won't be very satisfying.

A rather badly written power fantasy

This novel doesn't quite read as your typical japanese fantasy harem novel but it's quite close in terms of contents. The MC is a utterly average modern day guy with no real personality to show other than being nice.

An attempt was made to make him feel like a real person and not just a avatar of the writer by writing him as having a child and being divorced, but it fails utterly as they are just mentioned sparingly and leave the reader indifferent to them.

The mc shows all the sign of the typical power fantasy novel: he somehow becomes able to fight monsters and people in less than a month, gains an OP power that conveniently becomes flares up when he's in danger, gains two girls and maybe another one soon enough.

The writing feels rushed and devoid of details with some minor grammar errors.

The story at the begining was ok, it wasnt the most entertaining, but it was ok. then it became more realistic (not more enjoyable, but definitly more realistic) when he had the moral delema with allena (i think that was her name). the small ammount of power increace compared to the amount of corruption anoyed me to no small degree. it took him to long to get over his petty moral delema. the entire part with the divinity and his loss of power was the last straw for me. the grammar and style aren't bad, but the story is just off, and anoying.

It goes about right.

This story really does just click with me. Im surprised how it hasn't been in the trending fictions yet, but if it has then I must've missed it. The story surprisingly satisfies all my tastes, for some odd reason but I'm not going to question it. Although I do agree with Michizure about the "tell, and don't show syndrome," it pulls readers out of the story and makes them realize that it's just a story. Although I don't let it get to me much since I just plunge right back into the story, anyways Great work author! Can't wait for the incoming chapters! Big improvements comparing volumes 1 & 3

A good story rewritten into a great story!!!

This story builds at a good pace covering all its bases very well. It develops the local setting along with a larger setting without dragging things out like a history lesson. The characters develop slowly some more than others, but the important characters are developed through their actions in the story instead of like lazy authors just telling you how awesome a character is. The relationships in the story are very dynamic and cherished by any reader who has a brain. I love the MC relationship with so many different characters and how this affects the story.

AUTHOR... keep up the good work, this is your first story I have had the pleasure of reading and now that I am caught up I will start on your other stories as well!

Beautifully done take on a transfered to another world setting, really enjoyable read.  The world building really good, but the characters are even better.  Some of them are less interesting than others, but great effort has been made to craft these characters and their relationships with each other.

On the rewrite:  Personally, I enjoyed the original version highly, and felt it had a charming quality to it along with the all of the characters involved.  When coming over to the new version, however, not everything is an improvement.

The story is overall better, Rhea has even more impact this time around as a character than the last time, but I feel that other characters (the dragon siblings) have become somewhat less fleshed out.

Mood-wise the new version is much more heavy and impactful during character interactions.  Most of which feel right with the tone and setting, as opposed to the somewhat slightly silly tone of the original.

TLDR:  Its a good story overall, and on the subject of the rewrite I feel its one of those two steps forward one, no halfstep back.

Big improvement over the first.

While I liked the first telling of Fyde of the Void, this rewrite is a marked improvement. The MC comes out stronger with better defined growth and limitations. He also feels less childish. Things also aren't happening at the rapid pace that the first telling. There is more interaction with people that explains why they start liking each other.

Better than before (A LOT better)

I remember when this first came out, it wasn't as good as this one. I really enjoy the action and the overpowered parts to the story. Keep up the work Keriv136!

For those who give bad ratings, is it because y'all are haters? Or you don't like this fantastic story -.-

I would support you by donating money but i'm poor at the moment. ;-;

a very nice story, full of love for this genre.

first time reading this story and i like it very much.

dont get deterred by a somewhat lackluster prologue, it's worth it.

characters are fine and easily likeable, the pacing is good,

it's the kind of story which you can feel the author's love for the fantasy genre.

This story has good plot and good character development. I enjoy the Litrpg aspect as well, although it's not as prevelant as other books.